Verifying the hyperbolic law of cosines and law of sines..

I am trying to understand hyperbolic triangles. These two laws are supposedly universal in the hyperbolic plane.

However, whenever I've tried to verify them using applets which let me construct hyperbolic triangles either in the Poincaré disk model, or the Poincaré half-plane model, they never seem to be valid. The construction below serves as an example:

Similarly, you will find an inequality when you try to verify the cosine law.

Have I fundamentally misunderstood something? Why do these laws never seem to hold up on any triangle? 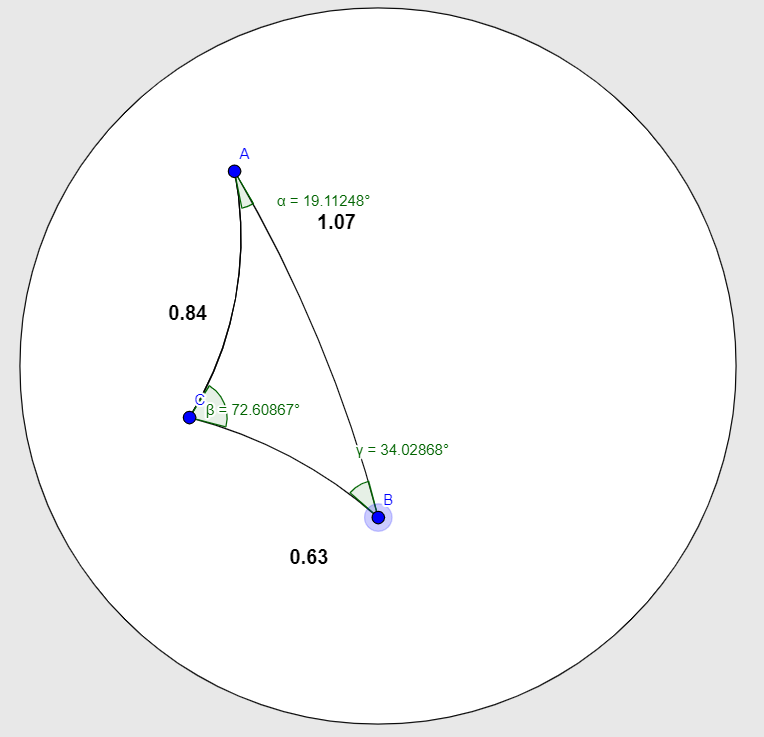 This Hyperbolic Canvas applet uses a number of under-the-hood constructions to get at the hyperbolic distance between two points in the Poincaré model. Here's a screenshot of the constructions based on "input" points $A$ and $B$. (I relabeled various elements to make sense of them as I was going through the process.) 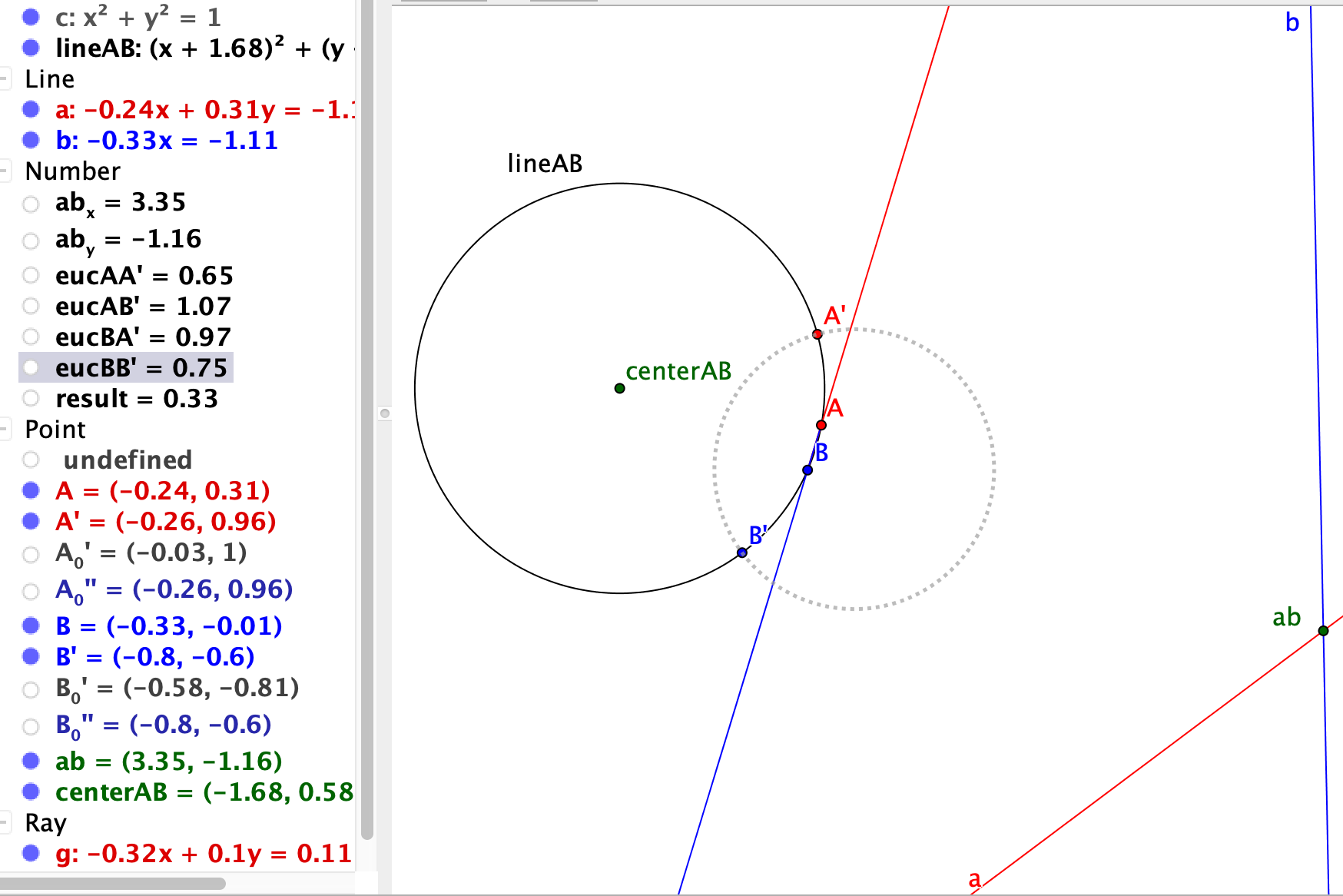 In a nutshell: We take a few steps to construct the orthogonal circle through $A$ and $B$ to determine ideal points $A'$ and $B'$. (There are conditional constructions to accommodate the circle being a diameter, etc.) Then the hyperbolic distance is calculated as $$d(A,B) = \left|\log\frac{|AB'||A'B|}{|AA'||BB'|}\right| \tag{1}$$

where $|PQ|$ indicates the Euclidean distance (marked eucPQ in the screenshot) between $P$ and $Q$ in the model. This is all geometrically correct. Equation $(1)$ is the first formula given in the Distance section of Wikipedia's "Poincaré disk model" entry.

A more-direct route to the distance, also given in Wikipedia, is

which requires nothing more than coordinates of points $A$ and $B$. Showing that $(1)$ and $(2)$ are equivalent is a nice exercise.

Now, even though $(1)$ and $(2)$ are equivalent, something seems to go wrong in the applet's implementation of $(1)$. Accumulated computational error from the numerous inherently-approximate constructions are at least partly to blame, especially since the input (model) points are already "close" by virtue of living inside the unit circle. The error may be compounded by the construction's conditional logic, but I haven't looked that hard. (Why the applet doesn't use the direct calculation of $(2)$ —especially since this is invisible to the user— is beyond me.) 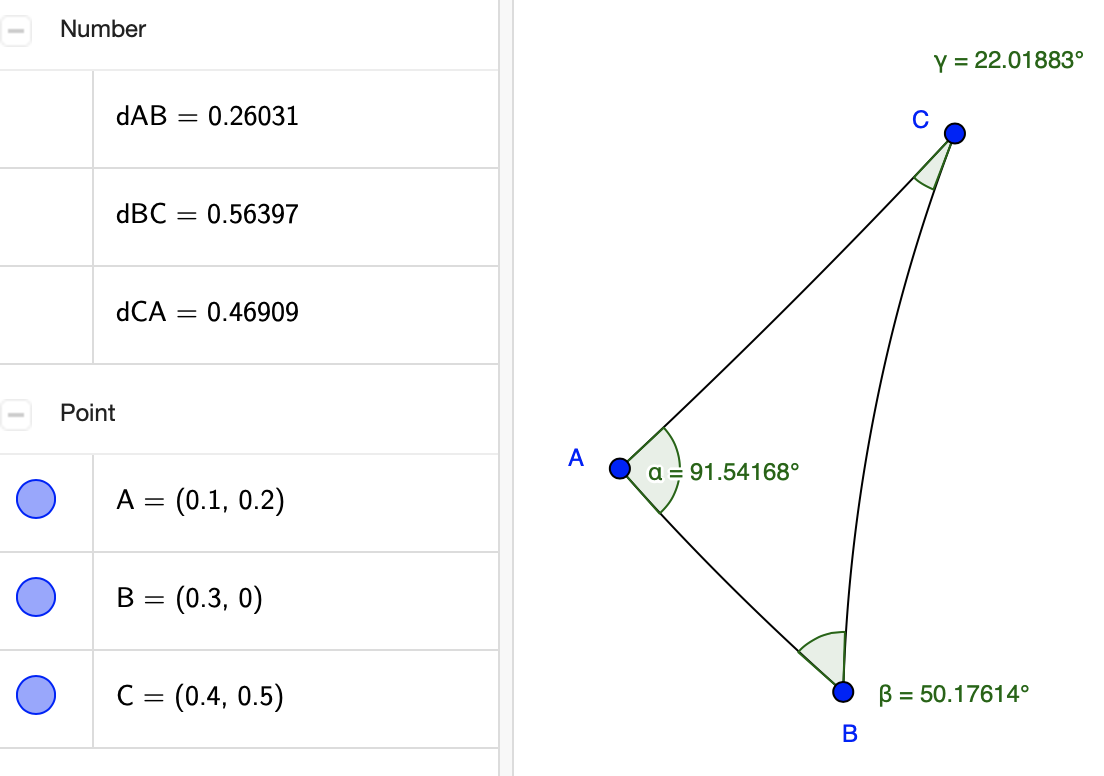 I can't actually say for sure that the applet's "hyperbolic distance" tool is using the construction shown at the top of this answer. (This was my first experience peering into a GeoGebra applet, and its author's under-the-hood labeling conventions weren't terribly clear. There are a handful of functions called "HyperbolicDistance". The construction shown was the first one.) Whatever the applet is doing to generate the distances in $(3)$, though, is obviously problematic because those distances are way off. I'll note that the applet also has trouble calculating angles when a vertex is at the origin.

So, all-in-all, the numerics of this particular applet are just plain untrustworthy, and the applet should probably only be used for a qualitative understanding of the Poincaré disk; eg, appreciating the broader nature of parallels, the non-constant angle sum, the curvy-looking (but not-actually-curvy) lines, and so forth.

P.S. When I want to draw a hyperbolic figure, I don't bother with special purpose macros in GeoGebra. I just construct what I need "from scratch" using standard GeoGebra tools. Perhaps the limitations of the applets will motivate OP to do the same thing; you're going to want to get good at this stuff, anyway. :)

For instance, while an applet might give you a one-click "hyperbolic line through two points" command, it's not at all complicated to construct the h-line from scratch: invert/reflect one of the points in the boundary circle, then invoke "circle through three points". Done! ... Well, there's an extra couple of steps to draw just the interior arc of the circle, but the point here is that a one-click command doesn't necessarily save you all that much work. (Indeed, the applet's path to the h-line is pretty complicated —just look at all those auxiliary elements!— so it may actually be doing a lot of unnecessary work.)

Not the answer you're looking for? Browse other questions tagged trigonometry triangles hyperbolic-geometry hyperbolic-functions or ask your own question.