How good can a “near-miss” polyomino packing be?

Given a polyomino $P$ with $n$ cells, we can ask about its maximal packing density $\delta_P$ in the plane (perhaps the limsup if we are concerned about convergence issues, though I don't think this actually comes up).

If $\delta_P=1$, then $P$ tiles the plane: having arbitrarily good packings implies that $P$ can cover arbitrarily large $N\times N$ squares, and from there the result follows via a compactness argument.

We can then ask: among polyominoes on $n\ge 7$ cells that do not tile the plane, which one achieves the highest density? Call this maximal value $\Delta_n$. For each $n$, $\Delta_n<1$, though of course in the limit for large $n$ it approaches $1$.

As a simple lower bound, we always have $\Delta_n\ge n/(n+1)$, as exhibited by the polyomino given by taking all but the first square in a spiral of length $n+1$ around the origin; once we plug the hole, it tiles the plane without gaps, but the hole cannot be filled. For instance, with $n=7$:

However, improved lower bounds and exact values for small $n$ seem pretty tractable, and I'm curious what is known in this direction. Some questions: 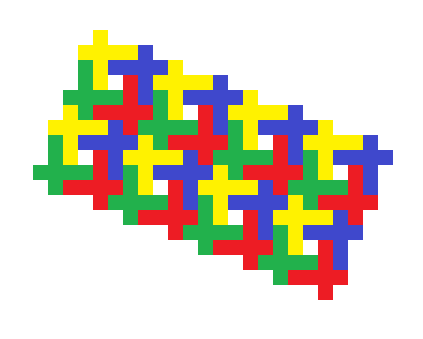 Here's a very simple heptomino tiling that is indeed "a tiling 15-omino which is the union of two copies of a non-tiling heptomino and an additional cell."

After getting frustrated with existing tiling software, I coded up some simple algorithms myself, from which I can establish an upper bound of $64/65$ on $\Delta_7$.

Note that if copies of a polyomino $P$ cannot cover a region $R$ of size $k$ with no overlaps, then any packing of $P$ has density at most $1-1/k$.

Then we have (as shown via exhaustive computer search): 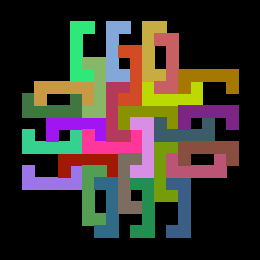 For all of these regions, I tried a few ways to shrink them and found tilings for every smaller region investigated. While the bounds on the other three polyominoes are reasonably close to the $28/29$ obtained by Carl Schildkraut, $H_1$ seems to present a serious obstacle. Perhaps this is because it really can tile the plane in a very dense manner not yet discovered? Either way, it seems like further investigation of $H_1$ tilings is the route to good bounds on $\Delta_7$.

Not the answer you're looking for? Browse other questions tagged geometry packing-problem polyomino or ask your own question.

21
What is the smallest polyomino that can't surround a $1\times 1$ hole?
18
How densely can the :…: polyomino fill the plane?
3
Filling a Board with Tiles that can be overlapped

3
If we remove a strip polyomino from a strip polyomino, is the result tileable by dominoes?
4
How many colors are necessary for a W-polyomino to never cover a color more than once?
21
What is the smallest polyomino that can't surround a $1\times 1$ hole?
6
Are the only polyominoes that can tile triangles right trominoes?
18
How densely can the :…: polyomino fill the plane?