sine vs Sine: understanding the differences

I was using the textbook A History in Mathematics by Victor J. Katz. I saw a theorem from Nasir al-Din al-Tusi. The way the theorem is written in the book is like this:

In any plane triangle, the ratio of the sides is equal to the ratio of the sines of the angles opposite to those sides. That is, in triangle ABC, we have AB:AC=sin(angle ACB):sin (angle ABC). [Note that since we are considering a ratio it is irrelevant whether we use Sines or sines.)

What is the difference between Sine and sine?

Six pages earlier, at the beginning of 9.6.1, the first subsection on Islamic trigonometry, a parenthetical remark notes:

The Islamic sine of an arc, like that of the Hindus, was the length of a particular line in a circle of given radius $R$. We will keep to our notation of "Sine" to designate the Islamic sine function

Additionally, in 8.7.1 on Indian trigonometry, the book explains:

In what follows, we generally use the word "Sine" (with a capital S) to represent the length of the Indian half-chord, given that the half-chord is a line in a circle of radius $R$, where $R$ will always be stated. We reserve the word "sine" (with a small s) for the modern function (or, equivalently, when the radius of the circle is 1). Thus, $\mathrm{Sin}\,\theta=R\sin\theta$.

I have not seen this convention outside of this book. As noted in the comments, in modern mathematics, some might use a capital letter to denote a restriction of the domain of the sine function.

Edit: it appears that the notation used in the book does not correspond to how I have seen $\sin$ and $\mathrm{Sin}$ being used elsewhere. However, I will keep this answer for the benefit of other readers.

$\sin$ is a function that (generally speaking) maps real numbers to real numbers. Here is how it is defined on Wolfram Mathworld:

Let $\theta$ be an angle measured counterclockwise from the $x$-axis along an arc of the unit circle. Then $\sin(\theta)$ is the vertical coordinate of the arc endpoint.

There are other equivalent definitions of sine, but however you choose to define it, it is not a one-to-one function: 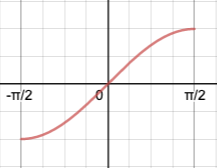 Notice that along this restricted domain, there are no two values of $\theta$ that produce the same output. This means that the inverse exists. However, because a function is defined not just by its values but by its domain, when we restrict the domain of $\sin$ it becomes a new function that we often denote $\DeclareMathOperator{\Sin}{Sin} \Sin$. The inverse of $\Sin$ is called $\Sin^{-1}$. You will often see $\Sin^{-1}$ being written simply as $\sin^{-1}$, but this is really an abuse of notation. The function $\sin$ does not have an inverse—only $\Sin$ does. A more popular alternative to $\Sin^{-1}$ is $\arcsin$. This notation has the advantage of being more 'correct' than $\sin^{-1}$, while also avoiding the $\sin$/$\Sin$ confusion.

Not the answer you're looking for? Browse other questions tagged geometry trigonometry reference-request notation terminology or ask your own question.

2
A question regarding the power of a sinus function.
2
Restricting Domain and Range in Inverse Trigonometric Function

1
Why does computing sine of an angle seem to recursively require sine?
0
The ratio of the largest to the smallest side.
1
If a spherical triangle has two equal sides then then it has two equal angles
7
Solving for angles in a Tetrahedron
2
Sine Law or No?
2
How do we evaluate the degree of $x$ using sine law?
2
Trouble understanding sine, cosine of angles greater than $90$ degrees
0
Prove that the ratio between the sines is equal to that of the sides.
1
The ratio $a:b:c$ of the sides of a triangle with angles $\alpha=120^\circ$ and $\beta=30^\circ$