I'm interested in formalising/documenting a program plotting Venn charts (well UpSet plots actually). Is there a term that can unambiguously refer to the coloured partition of the visualisation below (obtained from Wolfram alpha from $A \cap B \setminus C$) in relation to $A$ and $B$? It was previously referred to as distinct intersection of $A$ and $B$ (because it does not include the intersection of $A$ and $B$ with any other set) - is there a formal term for this concept? 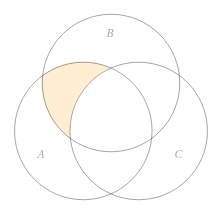 Edit: in general I am interested in a case of $n$ sets. I am looking for a generic name for a region of an intersection of $k$ sets ($k \leq n$) such that it is exclusive to the sets forming the intersection this is it excludes overlap with any other set that do not for this $k$ intersection.

No, there is not any commonly used term for this. Simply writing it as $(A\cap B)\setminus C$ or $A\cap B\cap C^c$ (with ${C}^c$ referring to the complement of $C$) would be a reasonable choice. If you want to refer to it in words, you could say something like "the region that is in $A$ and $B$ but not $C$", or "the intersection of $A$ and $B$ and the complement of $C$". You could also say something like "the region that is only in $A$ and $B$". I would strongly recommend against "distinct intersection"; that's not the way "distinct" is normally used in mathematics.

Not the answer you're looking for? Browse other questions tagged elementary-set-theory terminology or ask your own question.