What is the probability that three babies are boys, given that at least one is a boy?

I know this is a simple problem but I am arguing with a friend about its solution, so I want to show him an "official" proof! Suppose that in any birth, the probability to have a boy is $48.5\%$.

In the second problem, please note your set excludes the case where none of the fetus is a baby boy as you know at least one of them is.

now, I am not sure about an "official" sol but here is mine.

now in these cases, I would use sets and a Venn diagram. let's name the persons 1,2,3 now let A = {events|1 has a boy} and similarly for B and C so the Venn diagram would look like-Venn diagram

As others have suggested, you can "just" apply Bayes' theorem. However, this problem is a relatively simple one, and so it might help to draw out a probability tree to help organize your thoughts. I will not claim that this is the "best" or most efficient way to approach the problem, but I find that it can help to give some insight into why, as you are relying on something a little more concrete than a statement of a theorem. For this problem, the tree is something like the following: 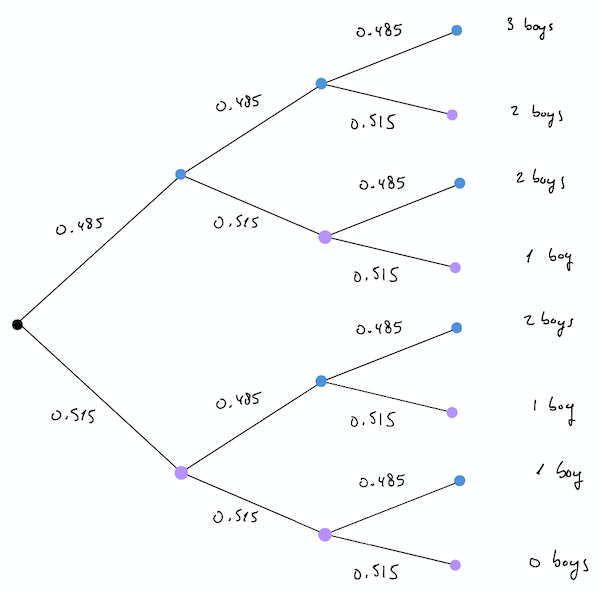 Not the answer you're looking for? Browse other questions tagged probability conditional-probability or ask your own question.