What is the mathematical foundation of Control Theory?

There is a question which I'm wondering again and again in recent months. I have taken courses on elementary differential equations, signals and systems, linear control systems, general theory of circuits and networks but I still do not know how can a simple linear integral transformation (Laplace transform) be so much helpful in analyzing and designing linear systems. For example, I think I somewhat know what "time domain" is, but how about the "frequency domain"?

Consider a block diagram in the frequency domain. Conceptually, what do the blocks represent? What is traveling(?) on the connections between blocks? First, I have thought that instead of taking care of the statement "when does some phenomenon happens" we consider "how many times does a phenomenon oscillate", but how can this approach be more helpful? Is it the best (optimal) way of treating such problems?

I think control systems and even systems have a more general meaning in mathematics. I even think that the very problem of "controlling a system" does have multiple "paradigms" — A.I., neural networks, state space approach, fuzzy logic, robust control, adaptive control, etc.

What I'm looking for is a book (preferred) or paper discussing the very beginning notions of system, control system, its history, and more importantly, what is the field or language in mathematics to study systems rigorously? Dynamical systems? Game theory? Differential equations? Linear algebra? A.I?

Any help is appreciated. Thanks.

As I said, I am looking for a book or article discussing the origins of Control Theory and Systems. Seven days are passed since I started the bounty, yet I didn't find an answer. I'll get to the bottom of this issue as soon as I get some free time. Thanks.

Arbib and Manes once made ​​an attempt to apply the Automata Theory to Control Systems, see:

I am not an expert in the Control Systems and can not judge how successful this attempt is, but from the point of view of the Automata Theory, it looks pretty well.

The power of the Laplace transform derives from the power of concepts like a linear operator and an eigenfunction. The exponential is the eigenfunction of the derrivative operator, which is the main operator in control theory. By projecting the system onto bases which are the eigenfunctions of the operators in your system, you simplify the problem by exposing the symmetries. This is what the Laplace transform does ($\int f(x) e^{-sx}dx$ is like an inner product between co-ordinates ($f(x)$) and the new bases you want to represent your function/vector in (exponentials). The result are new co-ordinates in the exponential space)

The complex exponential is the eigenfunction of the second derrivative operator. So projections into this space expose a different set of symmetries, in this case, the 'frequencies'. So the Fourier Transform is also just linear algebra.

I'd recommend a healthy dose of linear algebra, to satisfy all your inquisitive needs!

Control theory studies systems that have an internal state and can be connected with other systems via inputs and outputs. The dynamics are often but not always described by differential or difference equations.

Because of its engineering motivations, control theory is often interested in detailed analysis results and design techniques. Therefore it tends to spend more time on the easier cases: linear-time invariant systems. Linear algebra, and Laplace and Fourier transforms are extremely useful techniques, and about the most central ones.

Other relevant areas of math include differential geometry, dynamical systems, probability, algebra, analysis, automata, complexity of algorithms, you name it. Control theorists and engineers are always looking to apply other mathematical techniques to their problems, so no one of them is control theory.

is a very good book whose Chapter 1 begins with sections "1.1 What Is Feedback? 1.2 What Is Control?" Do not expect precise mathematical definitions but do consider consigning the text that states "nobody knows what feedback is" to the recycling bin.

There is no such foundation of control theory because the goal is to make a dynamical system behave in a particular way. In that sense, anything goes. That is the reason why you have trazillion of methods to control the same system.

To give a necessarily brief account of how control theory become a discipline independent from the underlying problem feeder, control engineering, you have to consider a couple of different tracks simultaneously. James Watt's work on the steam governor, Stephen Black's feedback amplifier and Hugh Stoller's work on early mechanical televisions are always the same problem in disguise though many felt the connection inbetween these systems. During this time amplification was investigated under different names; regeneration theory was in particular facetious since they were trying to amplify the signal in open loop to transmit over long distances and this was causing the ringing due to noise amplification. Black actually had huge resistance to his feedback amplifier idea since negative feedback was reducing the gain greatly and people initially didn't buy his stability claims.

After Nyquist and Bode's work on Black's amplifier and making the problem stand on proper mathematical footing we need to include the works of AM Lyapunov over stability of motion. This is a completely separate branch of mathematics that came from Chebyshev school (Markov and Lyapunov were both students of him). Until 50s, these branches stayed exclusive.

Yet another branch of electrical engineering had similar problems in circuit network and microwave theory. This constitutes all the port formalism leaked into the control theory. Desoer/Vidyasagar gives a good account of an electrical engineering motivation. As an example, what has been called Raisbeck's conditions for 2-port network was rebranded/rediscovered as passivity theorem in control theory. Today we can combine all these frequency domain tools under the umbrella of the Integral Quadratic Constraints framework.

Kalman, Bucy and others also started a completely different track with state space methods that are relatively wide-known hence I'll skip that part.

During this time, one also has to consider the use of analog computers to solve differential equations by adjusting knobs. It was a messy process but once solved the equation was solved exactly. That is the reason why Laplace transforms dominate the field even though today they are merely an obstacle for undergrads and they don't even have the chance to learn it properly other than replace the number of dots with powers of $s$ fashion. In fact the only reason why people learn partial fraction expansions is mostly due to Laplace transforms.

At this point you have to realize that these are hard core engineering problems. Hence there is no foundations whatsoever. All things considered, they were trying to solve very real problems. For example, Bode was working on servomechanisms (ship gun stabilization and so on) during the WWII.

Anyways, I hope this gives an idea of why history is not even close to being a typical math subject storyline. The foundation you are seeking in my opinion does not exist because it doesn't have to have any. You can use abstractions and John Baez has been using category theory and uses morphisms to replace block diagram elements but they are too advanced for me to make a judgement, you can watch these videos to get an idea. http://math.ucr.edu/home/baez/networks_oxford/

In the meantime, another great figure, the late Jan C. Willems has created yet another abstraction, namely the behavioral approach, which I like the most and even though computationally has no real advantage, conceptually clears a lot of issues. As a personal view, I do think that it is the way control theory should be taught. Moreover I guess it is the closest thing to a foundation of control theory.

I hope this gives an idea why such article or book is hard to come by. There is a massive amount of details to be covered. To this day, each discipline investigated the elephant in a dark room from a different angle. And I didn't do any justice to any of the items above other than just mentioning them. For example there is still a lot to cover Pontryagin, Lur'e and many other domains such as fuzzy, adaptive, gain scheduling, nonlinear control etc.

A great anecdote I have from Jan Willems is this picture with Y.Yamamoto (they are students of Brockett and Kalman respectively): 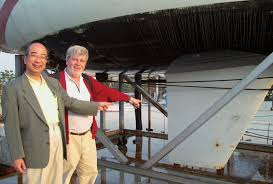 What they are pointing to is a sailboat stabilizer fin and he used to say,

the only bunch who don't call this "a stabilizer" are control theorists.

I think it speaks volumes about control theory in general and its prospective foundations.

Your question could probably be read as "why is feedback control so interesting mathematically?".

The answer is in "FEEDBACK SYSTEMS: INPUT-OUTPUT PROPERTIES" by CHARLES A. DESOER AND M. VIDYASAGAR. From the blurb:

"This book was the first and remains the only book to give a comprehensive treatment of the behavior of linear or nonlinear systems when they are connected in a closed-loop fashion, with the output of one system forming the input of the other. The study of the stability of such systems requires one to draw upon several branches of mathematics but most notably functional analysis."

So there's the link to functional analysis!

To the asker's desire

I can recommend the 2014 article Control: A Perspective by Astrom and Kumar.

Control Theory is a branch of applied mathematics, and as such doesn't really have a predefined "Mathematical Foundation". Techniques from complex variable theory, differential equations, linear algebra, optimization and calculus of variations, functional analysis, differential geometry, graph theory, Lie groups, etc. all make appearances in different places throughout the vast literature on systems and control.

One of the answers mentions automata theory, which puzzled me, since I've rarely seen this used outside of applications that deal with information systems. It's certainly not central to control theory in the way a control theorist would think of it.

But I guess that generalizations to the hybrid systems are possible.

All mathematics, functions, transforms and ..., can just model a physical system and sometimes all these models dont work properly. The blocks in linear control systems, are just models to let you understand better about the physics, say voltages, currents or maybe fields, that travel(!) from one par of the system to another… The reality of a control system is the physics not the blocks in frequency domain, but these block just try to let you understand it better and let you control it when its going to be unstable. Think of Fourier series which is indeed, expansion of a function to an infinite sum of complex exponentials, sometimes we dont need all of these exponential to model a physical waveform and a prat of them work, and sometimes the whole series fail to model a specific waveform.

A little bit Electronics (active circuts with feedback), Linear algebra and measure theory help you to understand better about the physics and foundation of Control theory...

Not the answer you're looking for? Browse other questions tagged reference-request control-theory .