1) I'm aware of the fact that $C(X)^*$, the space of continuous linear functionals $C(X)\rightarrow \mathbb{R}$ coincide with $M(X)$, the space of signed regular borel measures on $X$.

This intuitively makes sense because $\mu\in M(X)$ can be naturally be seen as an evaluation map $f\mapsto \mathbb{R}$ by means of integration.

UPDATE Landscape provided a counterexample in the comments. My source was: P. Lax "Functional Analysis" 2002, Page 82, Theorem 14(ii). I guess this might be a mistake, perhaps fixed in some errata somewhere.

Thus, $g_A$ as a function $(X\rightarrow\mathbb{R})$ is uniquely determined by the construction starting from $f_A$. But is it $g_A$ as an element of $C([0,1])^{**}$ uniquely determined? If so, it looks to me we would have a reasonably well defined notion of integration for non-measurable sets. 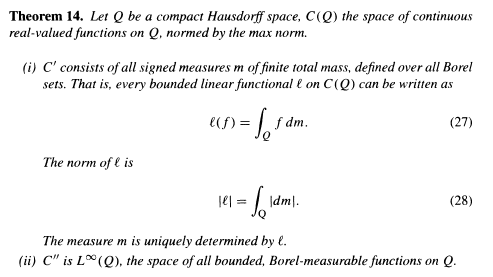 Not the answer you're looking for? Browse other questions tagged functional-analysis measure-theory or ask your own question.

13
What is the topological dual of a dual space with the weak* topology?
2
Goldstine's theorem
0
Dual of normed space of complex Radon measure