Probability that $3$ hands of a clock in the same semi-circle?

But when it comes to the dial hands, where I guess there are correlations between them, I am not sure whether my question is equivalent to the previous one. If they are not equivalent, and this question will be hard to calculate, then whether we can determinate this probability will be greater or smaller than $3/4$?
Anyone can help? Thanks.

The hands in fact move deterministically; it is just the time when we view them that can be random. The movement repeats ever twelve hours, so assume we view the hands at some moment uniformly distributed between noon and midnight. Then the probability they will be within a semicircle is the number of hours they spend in a semicircle, divided by $12.$

Starting at noon, the hands are within one semicircle until the second hand is opposite the hour hand. The second hand makes $12\times 60 = 720$ revolutions in $12$ hours while the hour hand makes one revolution in the same time, so the time until the second and hour hands first align after noon is $12/719$ hour, which is $720/719$ minutes; but the time from noon until the hands are exactly opposite is half that time, $360/719$ minute.

This is a promising pattern: after $n$ intervals like this, we will have spent a total of $n^2(t_m - t_h)$ minutes during which the hands do not fit in a semicircle.

Alas, the full solution is not that simple. The intervals increase in length until they are almost half a minute long, and then this simple pattern is broken.

The minute hand first becomes exactly opposite the hour hand at $6/11$ hour after noon, that is, at $360/11$ minutes after noon. Shortly before that, at $65t_h$ minutes, the second hand passes opposite to the hour hand, making the hands not within a semicircle; but at $360/11$ minutes after noon the second hand is suddenly finds itself between the minute and hour hands so that the hands are all within a semicircle again, even though $65t_m$ minutes have not yet passed.

After this abbreviated interval of not-in-a-semicircle time, the next interval is almost half a minute long, and the next several intervals decrease in length. But once they have decreased enough, they start increasing again, and the pattern repeats but with different intervals each time as the relative position of the second hand is different each time the minute hand overtakes the hour hand or comes opposite to it.

At about this point in the analysis I decided I would rather have a computer count the time for me. The events where the hands start fitting in a semicircle or stop fitting in a semicircle all occur at exact integer multiples of either $1/11,$ $1/59,$ or $1/719$ minute after noon. Since those fractions have a common denominator of $11\times 59\times 719 = 466631,$ every event of interest (where the hands start or stop being within a semicircle) occurs at some multiple of $1/466631$ minute after noon. By taking $720\times 466631$ equal timesteps of that length we cover twelve hours. At the start of each timestep we know from the relative positions of the three hands whether the hands will fit in a semicircle or not during that timestep. (It is one way for the entire duration of the timestep.)

I wrote the analysis in the python script shown below. I had the script count the first six hours, take a checkpoint, and then do the last six hours. Everything after $6$ o'clock is a mirror image of what happened before, in reverse order, so the same sequence of lengths of intervals occurs in reverse order after $6$ o'clock. I had the script record the start, end, and duration of each interval to verify this. Note that since each interval starts about a minute after the previous one, there are almost $360$ intervals in six hours, but not quite $360$ due to the way the hands "catch up" with each other.

According to my spreadsheet calculations, if $n = m+1$ there are $32$ matched pairs of intervals for each value of $k.$ since there are $11$ values of $k,$ the total time in intervals that belong to typical matched pairs is $352 \times 234960$ timesteps. It then remains to account for the $14$ intervals that are not in typical matched pairs. Those intervals can be identified for each $k$ by finding the maximum $m$ such that right-hand side of Equation $(1)$ is negative and the minimum $n$ such that the right-hand side of Equation $(4)$ is greater than $\frac12.$ A relatively quick hand calculation should therefore be possible, though it would still be longer than I would like to write in detail in this answer.

Update: The calculations are not as long as I feared after all, as shown in G Cab's edited answer.

Here is the script for the brute-force method:

$\overline K (k,x)dx $ is represented by the segments of the two sawtooth waves intercepted
inside the respective forbidden areas like those shown in the following sketch. 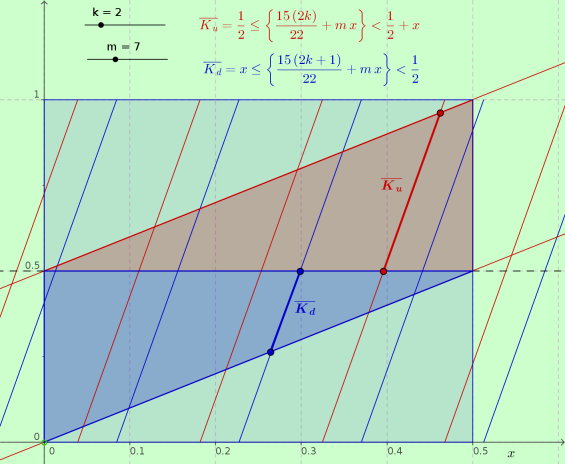 Note that for better clarity the inclination $m$ of the lines is much lower than $719/11$.

Next we take the upper triangle and slant it as shown

7
Three points on a circle

3
Combinatorics and Probability Problem Concerning Poker Hands
1
Basic Probability: choosing points at random on a circle
0
probability of having an ace on each hand when dealing 52 cards to 4 hands
0
Conditions required to yield exactly one solution in Bertrand's Paradox
4
$2n$ points on a circle. What's the probability two strings will intersect?
0
Calculate the probability that a point in a circle will land within an inner circle with half the diameter
1
Generalisation of an Interesting Problem - Probability