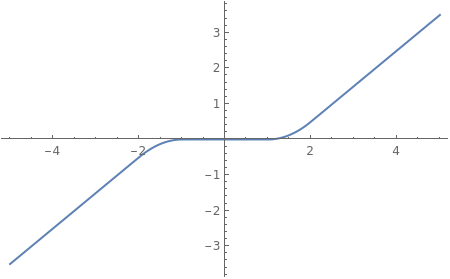 I will eventually define a vector field from this scalar field which describes a flow in a flat manifold. Moreover, there is an energy functional that is defined in terms of the second derivatives of this scalar field, hence the reason for continuity.

I tried using bump functions and integrating backwards to get the scalar field I want, but the integrals became messy quite fast, as you might expect. Similarly, I tried using hyperbolic tangents, but I wasn't able to smoothly attach the pieces together. 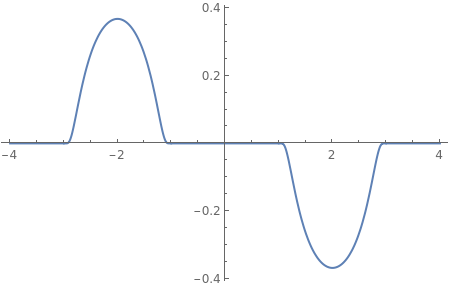 I tried integrating this and using the integration constants to satisfy my required properties, but the integrals are quite messy!

I appreciate any help!

I actually found a descent enough function. I started with the conditions on the second derivative I wanted to satisfy. So I construct the following function, which is just the sum of two gaussians, such that the entire function is odd about the origin $$ \alpha(x) = - e^{-\frac{(x+a)^2}{\sigma}} + e^{-\frac{(x-a)^2}{\sigma}}$$ with $a,\sigma \in \mathbb{R}$. Now, this function is what I want the second derivative to look like. To get the original function, I integrated this function twice to get

where $C_1, C_2$ are integration constants and $ERF$ is the error function from integrating a gaussian. Now, to have a linear function at large values of x and a flat function near the origin, we just massage the parameters until the function has vanishing derivative at the origin (flat) and constant non-zero at large x (linear). For example, I find $C_1=0$, $C_2 = 1.5$, and $a \approx 1.0087$ gives me: 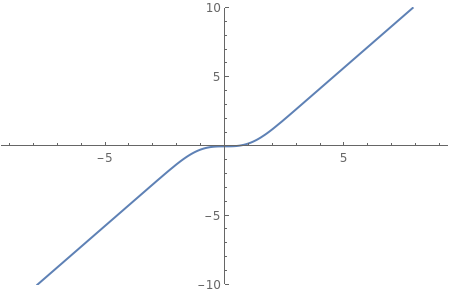 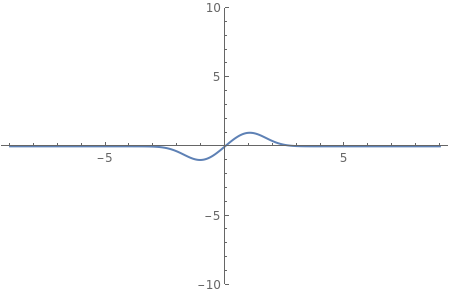 Hope this helps someone else in the future if you ever look for a function like this! 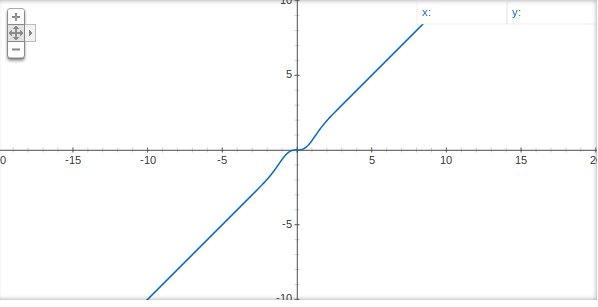 Not the answer you're looking for? Browse other questions tagged real-analysis functions continuity or ask your own question.

0
If partial derivatives of order $m$ are continuous then all partial derivatives of order $\leq m$ are also continuous
5
Convex function with non-symmetric Hessian
4
Monotone increasing continuous function with $\int_a^b f' = f(b) - f(a)$ which is not absolutely continuous
2
Smoothness of integrals of dirac delta function
2
Can we identify absolutely continuous functions on $(a,b)$ with values in $X$ with $W^{1,1}((a,b);X)$?
6
Intuitively (or precisely), which functions can be approximated by straight lines?
0
How to write a function that describes a thin spherical shell?
0
Is the quantile functional continuous in sup-norm?
1
Are the solutions of $f(x+h)=f(x)f(h)$of the form $a^x$ even if we consider discontinuous functions