i have a question regarding roots of equation, find all $a$,such that the cubic polynomial $x^3-bx+a=0$ has three integer roots, how can you solve these by using galois theory,what does the reducible polynomials,splitting fields,field extensions have to do with these, explain each of them,in detail,because it serves as a introduction to galois theory, ok for eg take $b$ to be 3 and list all $a$ such that equation has three integer roots

Your problem is a classical diophantine problem that Fermat or Newton could have studied, long before Galois.

In the case you mention, you don't really need Galois Theory.

You might enjoy this representation of solutions for small $b$s and $a$s. 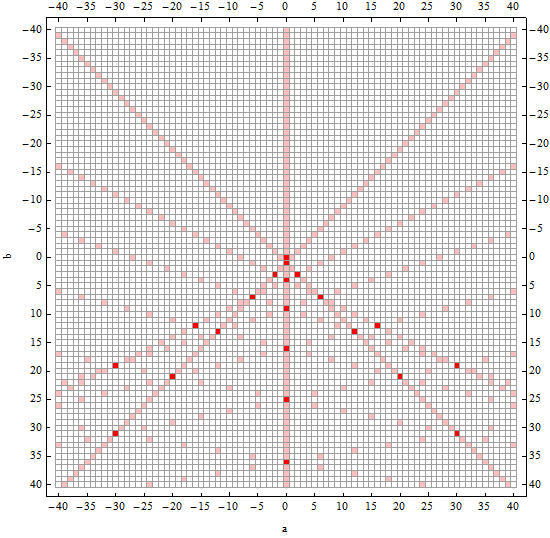 with red squares indicating combinations of $b$ and $a$ where the polynomial has 3 integer solutions and pink squares where there is only one (in this case the polynomial can be factorized with an integer linear factor, the two other solutions being complex conjugates). You can guess with this image (but need to prove) that there is no solution for negative b, that the solutions are symmetric around the vertical axis and that solutions arise as intersections of straight lines representing one parameter families of equations with at least one integer root.

Galois Theory is not about whether roots of polynomial equations are integers. It has been developed and applied initially to study whether roots can be finitely expressed by addition, substraction, multiplication, division, n-th power and n-th root extraction starting from given quantities, including the coefficients of the polynomials, that is whether these solutions are algebraic in terms of the coefficients and other quantities.

The theory provides among other things a deep and far-reaching understanding of what happens for polynomial equations with degree greater or equal to 5: the individual solutions cannot always be expressed as an algebraic expressions of the coefficients, while some expressions involving simultaneously all the roots can.

Squaring the first equation gives $r_1^2 + r_2^2 + r_3^2 = 2b$, which immediately tells you that for fixed $b$ there are only finitely many possibilities for the roots, and from here it's casework for any fixed $b$.

11
Does a cubic polynomial with 3 real roots have Galois group C3?
8
Applications of cubic in number theory?
6
Help to find cubics with square discriminant
6
Galois Theory, finding roots of a polynomial
4
Geometric distinction between real cubics with different Galois group?