An angle is a simple geometric figure that is obtained by taking a ray and rotating it about a point to form another ray, both of which have their starting point in common. The initial rays is called the initial side, the final one is called the terminal side and the common point is called the vertex.

The point of measuring angles is to describe, in a way to what degree (pun intended) the initial line is rotated about the vertex to obtain the terminal line. The three usual measures of angles i.e. degree, radian and grads are dimensionless since they are all based on measuring an angle as a ratio of the arc length to the radius (I might be wrong, please let me know if I am). 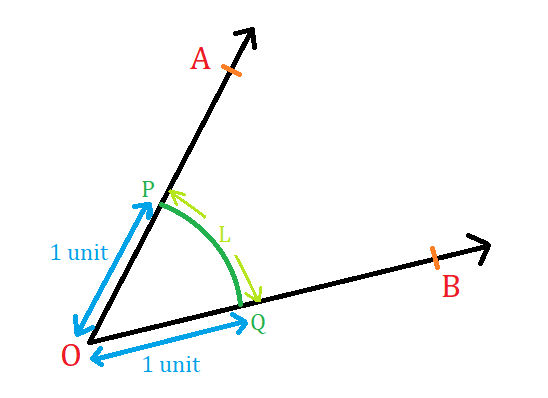 Also, I find thinking about measuring angles like this much simpler than as a ratio of arc lengths.

So, can this be called a valid way of measuring angles. If not, why?

The units on a measurement tell you, among other things, how the number will change if you decide to change the units you use.

So it make sense to report the angle simply as "$0.7$" in both cases, because if we change the units we're using, the angle does not change.

Units of measurement are attached to values to represent their behavior under change of scale, or change of unit.

In general, if a value in some system is measured in $m^n$, then scaling the system, or our unit of measurement, will cause that value to be scaled with the $n$-th power of the scale factor.

Not the answer you're looking for? Browse other questions tagged geometry angle or ask your own question.

3
Defining the measure of angles
4
Radians (and angles in general) how do they work?
3
Proof: Invariant angle measure - same result for any circle drawn.
1
Derivation of the length of an arc formula
2
Defining angle and showing that the measure of an angle is well defined.
1
Triangle congruence when the longest sides, the largest angles, and one of the other sides are congruent?
0
If angle is not a closed figure, then how does it contain interior points? We know that every closed figure contains interior points.
1
What exactly is a constant angle?