I think this is a pretty classic problem but I am not able to find a solution using the techniques which were used to solve a similar kind of problem (only the angles were different and they were $30^\circ$ and $24^\circ$ respectively). The idea was to create an equilateral triangle by drawing a perpendicular line segment from $B$ to $AC$ with the same length as $AB$. However, that technique does not work here and I cannot find another way. Any help is appreciated (I forgot to add this but an answer which uses "geometrical" methods like drawing line segments or forming new triangles etc. would be great), thank you. The figure is as follows:

I will insert a slow geometric solution. Doing it in steps may allow a pause after any step, the ambitious reader may want to find her or his own path to the solution. This may be also a good preparation for an olympiad or related challenge... The reader in hurry may chose to consume one of the two solutions listed in (4) and/or (5), which can be understood independently.

In such situations it may be useful to use the pattern of an existing symmetry inside a regular polygon. The given triangle $\Delta ABC$ should be realized with vertices among the vertices of the polygon. (But the imagination of the solver should not stop here, sometimes using the center or some related intersection of diagonals may be also fruitful.) In our case we search a constellation with $A,B,C$ among the vertices of the regular polygon $P_{30}$. If the vertices are $0,1,2,3,\dots,14, 15=-15, 16=-14,\dots, 29=-1$, denoted using the elements of $\Bbb Z/30$, then a possible choice is $B=0$, $C=3$, $A=5$. 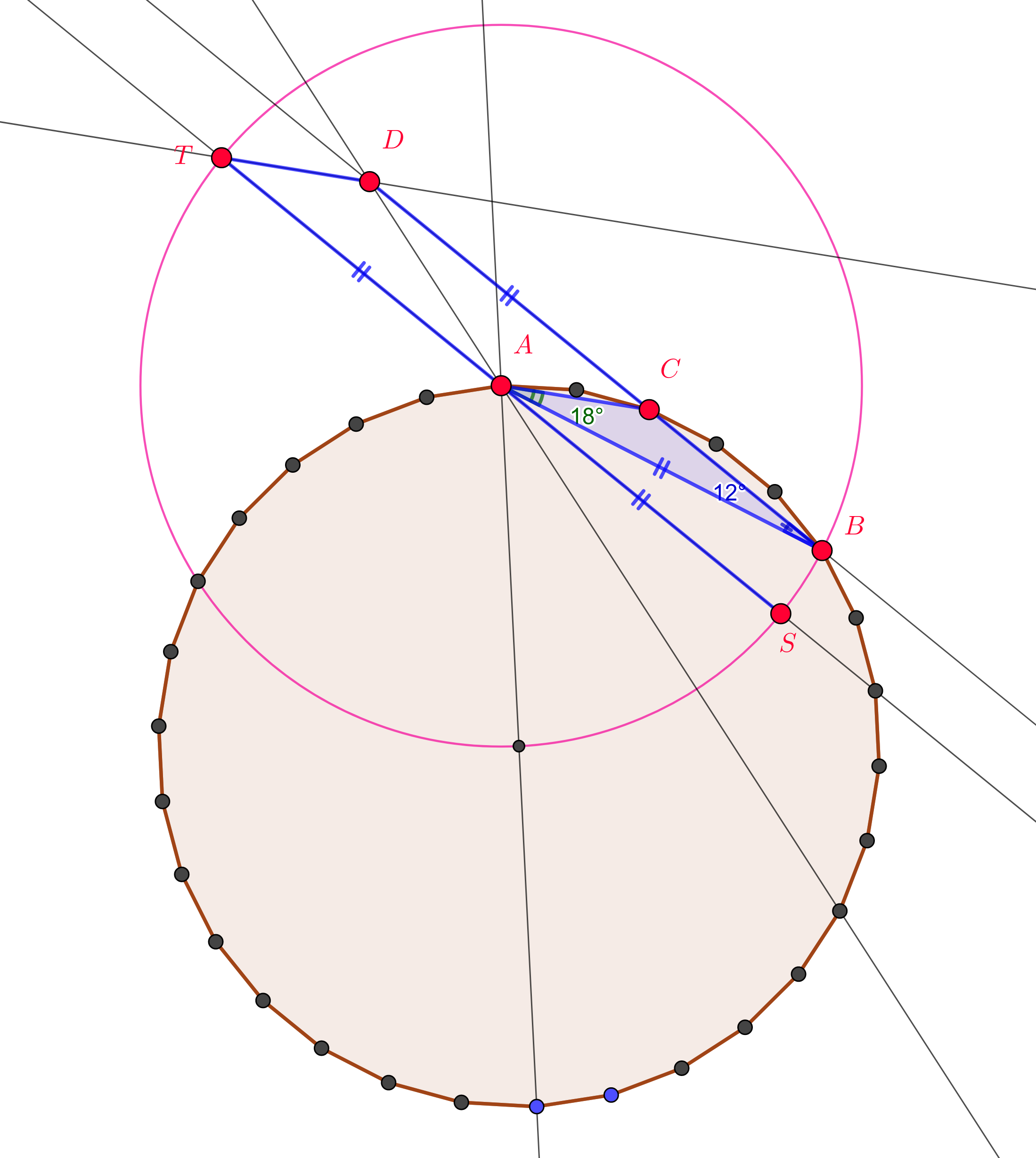 We draw $DA$ and ask for the angle between the lines $AD$ and $BCD$. The picture suggests the next step, try to pause consuming the solution at this point...

(2) Some more observations and another picture: 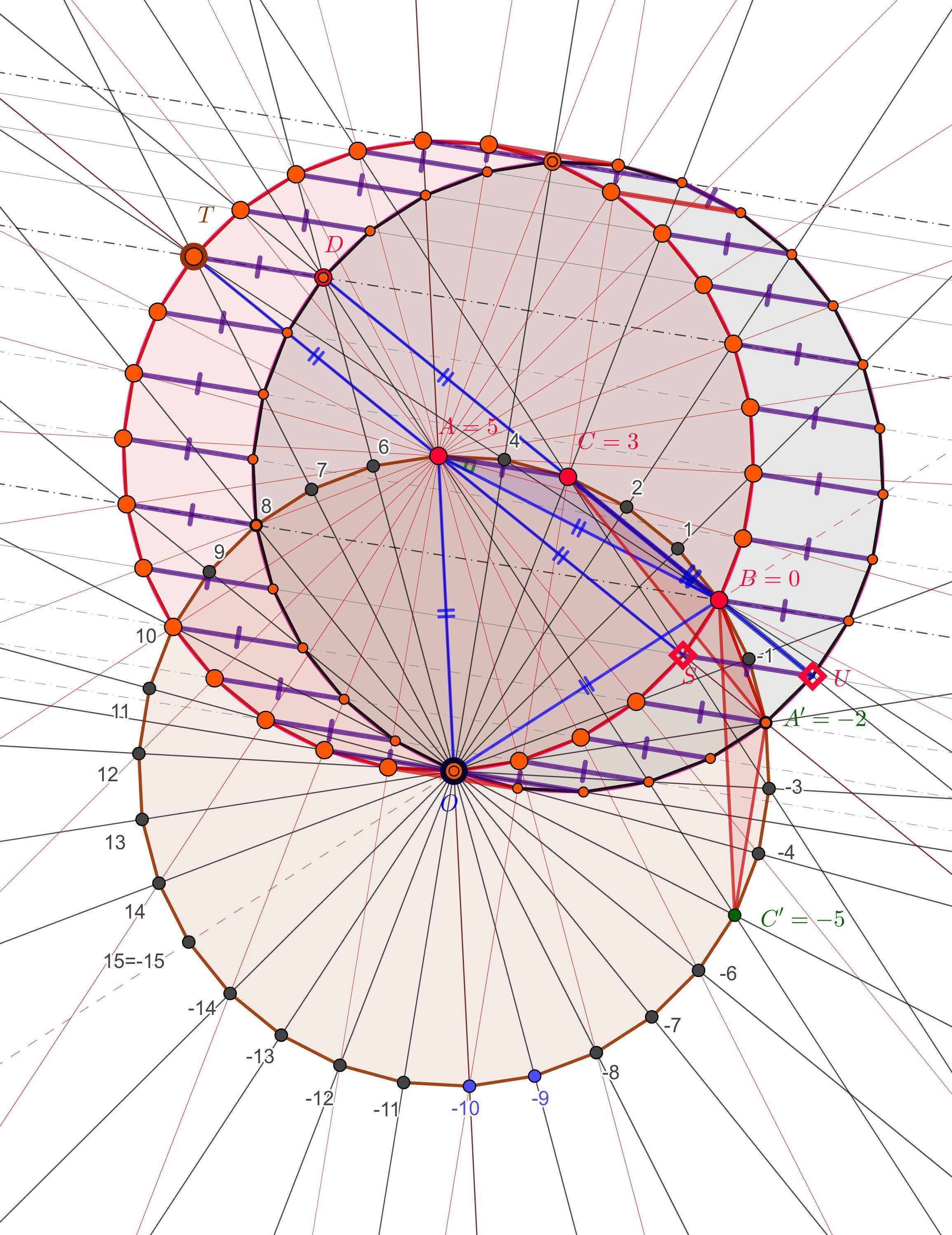 This picture is of course too much and not needed, for the OP we want to know the angles in the paralellogram $ACDT$ formed by the diagonal $DA$ with the sides. Let $U$ be the point with $\vec{AC}=\vec{SU}$. The parallelograms $TDCA$ and $ACUS$ are congruent.

(3) An other observation and yet an other picture:

A similar observation can be done with rotations (instead of translations). For example... The circles $(A)$ and $C$ are passing through $O$ (and an other point). Consider the rotation centered in $O$ which maps $A$ into $C$. Then it maps the $30$-gon inscribed in $A$ with one vertex in $O$ into the $30$-gon inscribed in $C$ with one vertex in $O$. A picture suggesting the movement of the vertices by drawn circles of guidance would be: 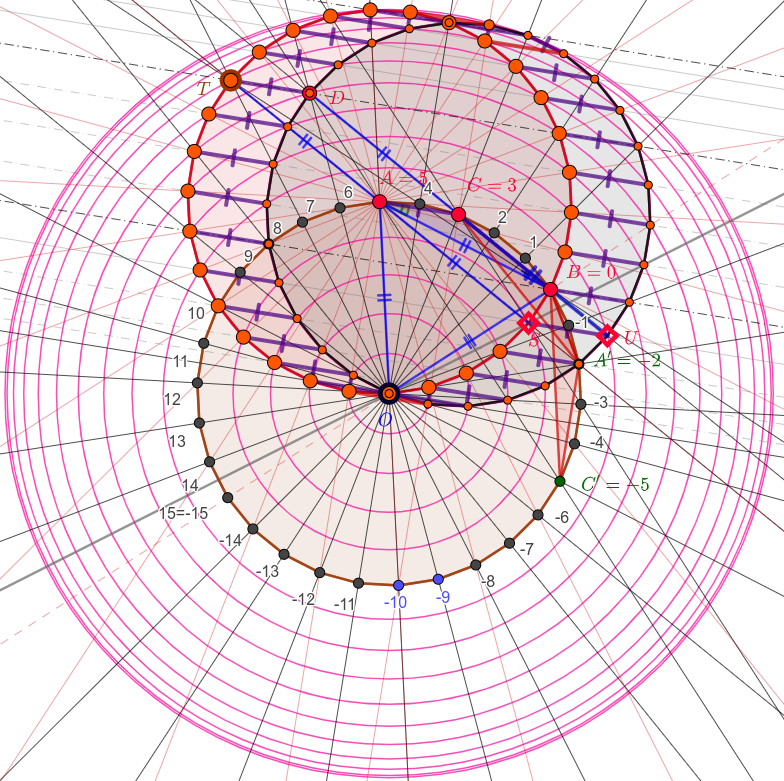 Again, this is too much for our purposes, but we are only collecting ideas.

When searching for a solution, the idea is to use some pointed points under the many points constructed above. 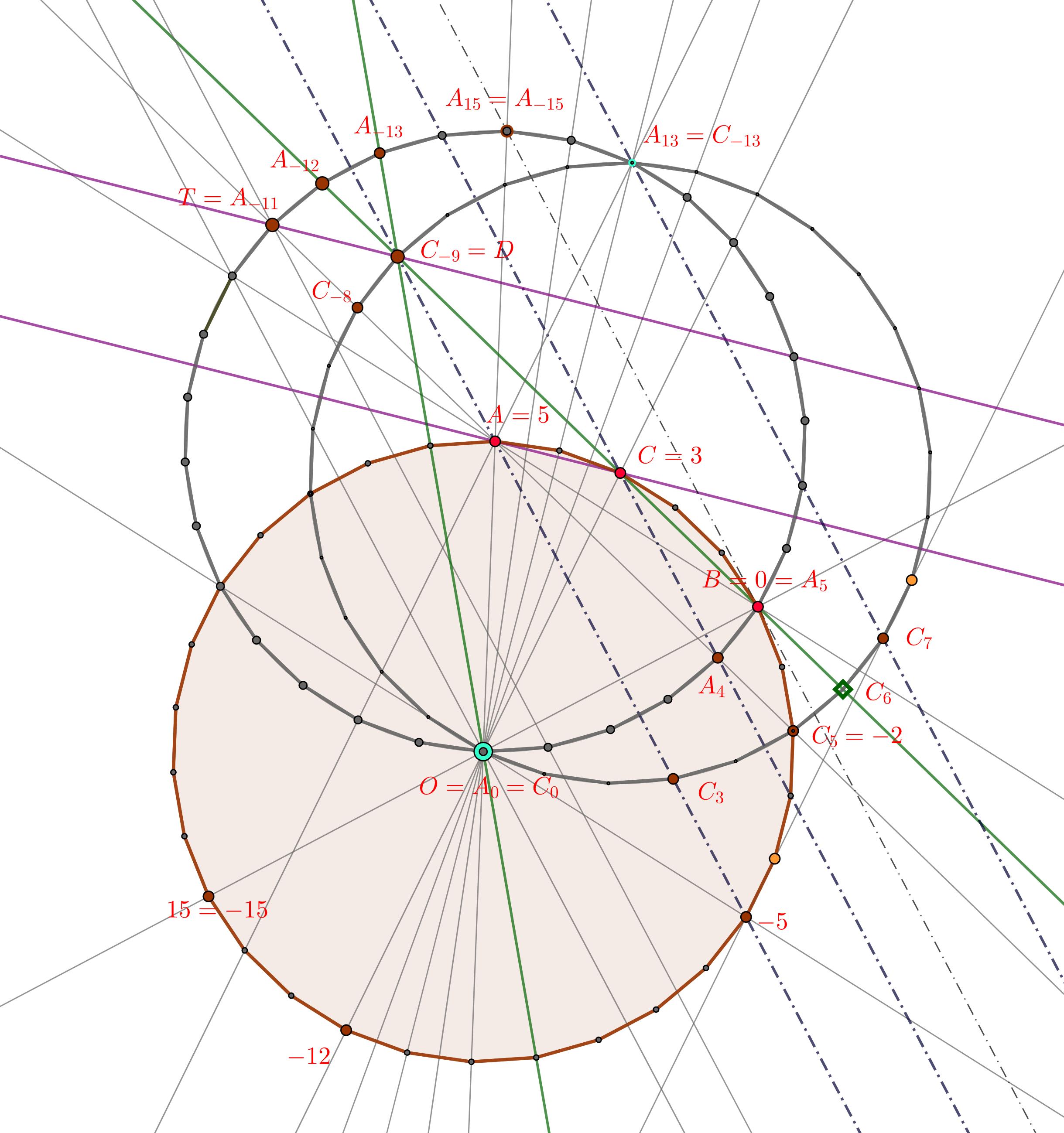 We use the same notations as above, else this would make 60% of the solution. 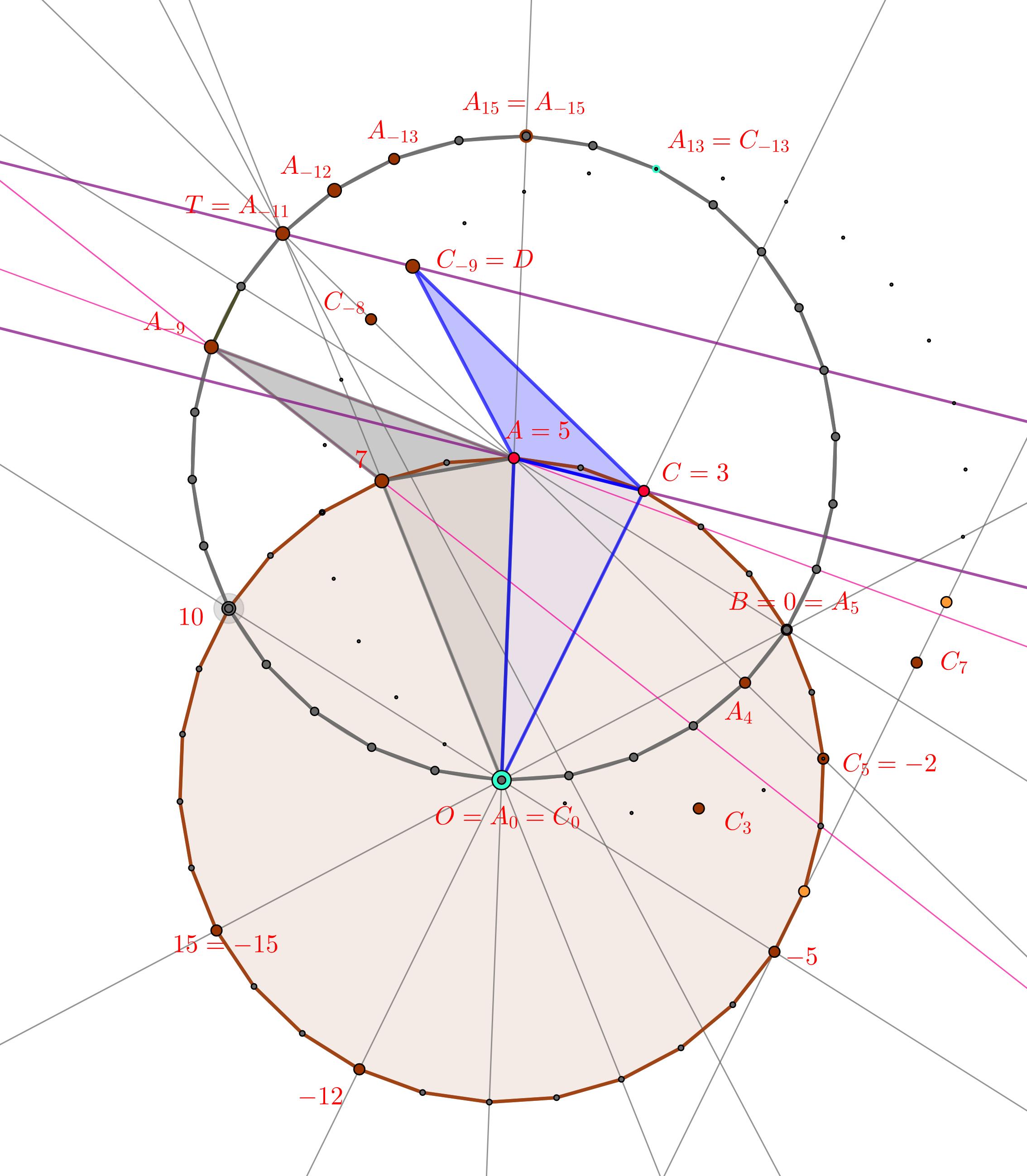 While I was trying to correctly plot the angles in $\triangle ABC$ I figured out that an easy way is to use a regular triangle and a regular pentagon. 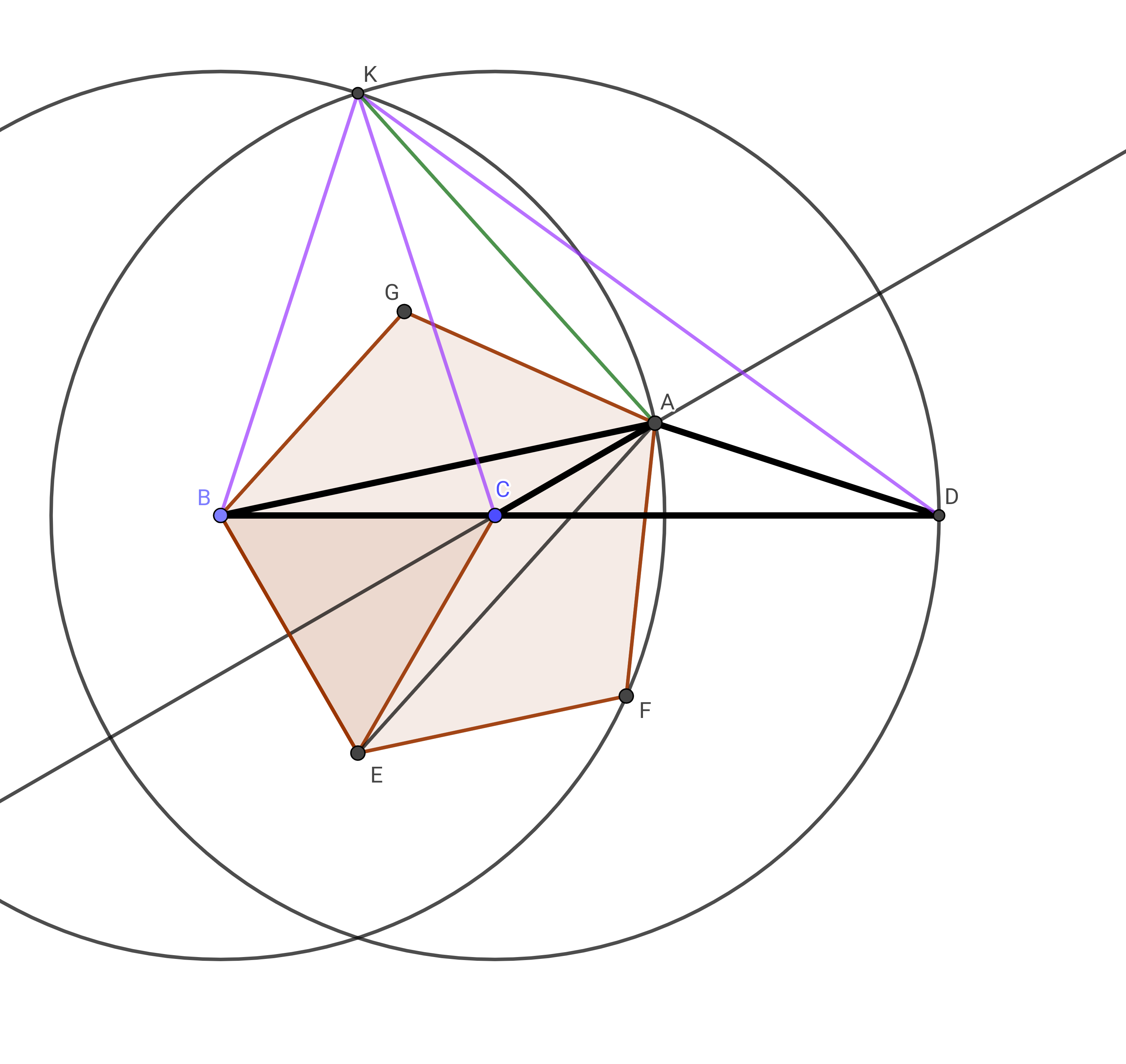 Now we can use again an equilateral triangle: $AB=BK$ and $\angle ABK=60°$ so $AK=AB$, the triangles $\triangle ABD$ and $\triangle ADK$ are equivalent as their sides have the same length, and finally $\angle BDA$ bisects $\angle BDK$.

Not the answer you're looking for? Browse other questions tagged geometry euclidean-geometry triangles angle or ask your own question.