Is there a clever solution to Arnold's "merchant problem"?

There is a problem that appears in An Interview with Vladimir Arnol'd. The problem is also quoted here.

You take a spoon of wine from a barrel of wine, and you put it into your cup of tea. Then you return a spoon of the (nonuniform!) mixture of tea from your cup to the barrel. Now you have some foreign substance (wine) in the cup and some foreign substance (tea) in the barrel. Which is larger: the quantity of wine in the cup or the quantity of tea in the barrel at the end of your manipulations?

Children five to six years old like them very much and are able to solve them, but they may be too difficult for university graduates, who are spoiled by formal mathematical training.

Given the simple nature of the solution, I'm going to guess that there is a trick to it. How would a six year old solve this problem? My university education is interfering with my thinking.

At the end the tea cup is as full as at the start. This implies that the added wine is exactly outweighed by the tea that has disappeared.

Or, here's an even slicker way. Notice that the total volumes of liquid of the cup and barrel have not changed, since the two spoonfuls they exchanged cancelled out. So, the overall change must be that the barrel exchanged some volume of wine for the same volume of tea from the cup.

Note that your solution is actually wrong--when you compute the amounts of wine and tea in the second spoonful, you are assuming the cup was mixed uniformly after the first spoonful, which the problem tells you not to assume (that's what the "(nonuniform!)" is all about).

After step 1, there is always one spoonful of wine in your cup.

You place one spoonful of wine back into your barrel, then there is 0 tea in your wine and 0 wine in your barrel.

You place half a spoonful of tea and half of wine back into in your barrel, then there is 0.5 tea in your wine and 0.5 wine in your tea.

It seems that the quantity (not ratio) of tea in your wine and wine in your tea remains equal regardless.

One way to approach the problem is to recognize the importance of the fact that you're expected to find a solution under the assumption that the tea-wine mixture in the teacup is nonuniform. In other words, it's impossible to know whether you're transferring a spoonful of tea back into the barrel, or a spoonful of wine, or some mixture of the two. What this implies is that the relative sizes of the teacup and wine barrel, as well as the proportion of wine that you scoop out of the teacup, are completely irrelevant.

With this knowledge, we can see that we should get the same answer whether we scoop a spoon of wine into the teacup and then go back, or if we scoop a spoon of tea in the wine barrel and then go back. Without knowing (or needing to know) anything about the relative sizes of the containers, we can just fill the barrel with tea and the cup with wine to do the "reverse" experiment. Transferring the wine into the tea will be no different if we have a teacup-sized wine barrel and a barrel-sized teacup - after all, there's nothing to indicate that this isn't the situation being described!

By symmetry, the only logical conclusion is that there is exactly as much tea in the wine barrel as there is wine in the teacup, regardless of whether the teacup or barrel is filled with tea or with wine to begin with. Otherwise, we would arrive at contradictory results when doing both experiments - we can't find more tea in the wine barrel when going one way, and more wine in the teacup when going the other, which is particularly obvious when we just switch the vessels that the liquids are in to begin with.

Huh. I must be a 5 or 6 year old since I thought this was completely trivial. I have noticed though that I tend to reason visually far more often than algebraically. 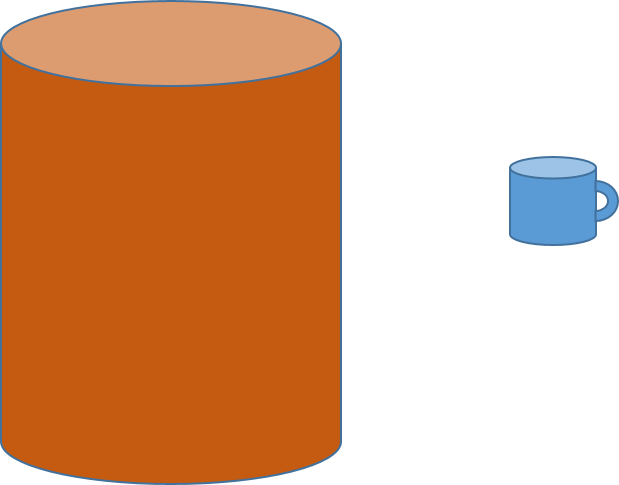 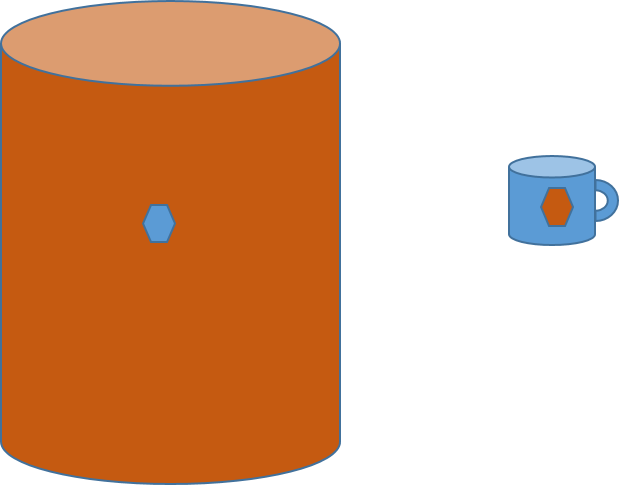 I mean, it has to be! No matter whether it's a spoonful, or a pinch, or whether you moved stuff back and forth 3 or 4 times, or what have you ... in the end, whatever amount of wine gets replaced by tea must have ended up in the cup.

The way I see it intuitively as a venn diagram. Two spheres represent the arbitrary amount moved around, I. This case a tea spoon amount. So when they overlap, you ask which area is greatest of the two spheres which aren't overlapping. But you see any area taken from one must be taken from the other and the area is the same.

Not the answer you're looking for? Browse other questions tagged algebra-precalculus recreational-mathematics or ask your own question.

0
Why is the equal volume sufficient to solve the puzzle without any calculations?
6
Russian Old Merchant Problems

3
Is there a solution to this Seating Plan problem?
1
A merchant with geometric progression
5
Is there always a solution for this packing problem with collision constraints
1
A clever reformulation of the absolute value
0
A merchant claims a loss of 4% on coffee, but uses weight equal to 840g instead of 1000g. What profit/loss the merchant actually makes?
2
Arnold's Trivium: Problem 5
0
Clever equalities proven similarly to Euler's Identity
6
Understanding solution to the secretary problem
2
General mathematical solution to this problem? Code solution given