Covering a polygon with an odd number of sides

I have the following elementary problem/question that I do not know how to tackle. It comes with a "math-olympiad-flavor" but I suspect it may be much more difficult than an high-school olympiads problem.

Let $\mathscr{P}$ be a simple polygon (not necessarily convex) in the plane, and such that the number of sides of $\mathscr{P}$ is an odd number $2k+1$.

For each vertex $v$ of $P$ there is an intuitive notion of opposite side (because the number of sides is odd), just label the sides counterclockwise at $v$ from $1$ to $2k+1$, and it would be the one with the label $k+1$.

Now suppose that for each vertex and its corresponding opposite side I consider the triangle the determine in the plane. Let us call $\Delta_v$ this triangle and call it a central triangle.

always true? In other words, if one paints all central triangles is it true that the whole polygon is then painted?

The statement is true. In fact, we can generalize it a little bit beyond the simple polygons; we need only the weaker condition that its winding number is $1$ (intuitively, that if you "walk around" the polygon you will only make a turn of $360^\circ$, not any other multiple thereof - its angles add up to the right amount). We can also bend the edges however we like.

To see that it doesn't necessarily hold for polygons with higher winding number, consider the case of a 5-pointed star (darker regions indicating those which are swept out twice): 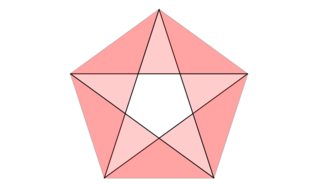 To answer the question, we move from the discrete to the continuous and solve a more generalized problem.

Finally, note that as $x$ ranges over the interval $I_{2j}$, the locus of all these line segments is exactly the triangle formed by vertex $P_j$ and its "opposite side" $\overline{P_{j+k}P_{j+k+1}}$ (where the indices are to be interpreted modulo $2k+1$). (When $x$ is in an odd-indexed interval,$x+0.5$ is in an even-indexed one, so these triangles cover every line segment involved.)

So, for the given parameterization, this just says that every point in the interior of the polygon $\mathscr{P}$ is covered by one of these triangles.

Having established that the claim will yield what we want, we move on to the proof.

(Thanks to Calvin Lin for the "beam" framing of the problem, and thinking about things in terms of a rotating line segment instead of a sum of triangles.)

For convex polygons, I believe the answer is true. You can use ideas similar to the IMO Windmill problem (2011/2).

First, instead of considering the central triangles, we consider a BEAM that goes through a vertex $P$, splits the remaining vertices into two sets of equal size, rotates clockwise while pivoting around the vertex $P$ until it hits another vertex $Q$. This vertex takes over as the new pivot and continues rotating clockwise. This process continues indefinitely, cycling through all of the vertices.

Claim: When the beams is only going through one vertex, then it splits the remaining vertices evenly.
Proof: The number of vertices that are on one side of the beam is an invariant prior to and after connecting with the next pivot. The result follows.

Claim: If the beam is pivoting about vertex $v$, then the next pivot will be $v-k$.
Proof: Because the polygon is convex, the vertices $v-k$ and $v+k = v-k-1$ uniquely satisfy "split the remaining vertices evenly just prior to and after connecting with the next pivot". Due to the clockwise ordering, the sequence is $v-k-1 \rightarrow v \rightarrow v-1$.

Claim: The area within the polygon which the beam covers, is indeed the union of the central triangle.
Proof: With the pivot at vertex indexed $v$, the prior vertex is $v-k-1$ and the next vertex is $v-k$, so the beam's intersection with the polygon is the triangle $v-k-1, v , v-k$.

Claim: Every point in the convex polygon is covered by this beam (at least once).
Proof: Consider a point $p$ in the polygon that doesn't lie on any diagonal.
Draw a line through this point $p$, and let it pivot about $p$.
As this line pivots about $p$, when the line intersects a vertex, count the number of vertices to the "left" of the line and to the "right" of the line.
When the line pivots $180^\circ$, these two numbers flip over. Consider the expression "left vertices minus right vertices". It

Hence, by "continuity" (applied to the discrete change), it must be equal to 0 after some rotation. Let this vertex be $K$. Then, from the above, the vertex is covered by the central triangle $K-k-1, K, K-k$.

For points $q$ that are on a diagonal, take a sequence of points not on the diagonal whose limit us $q$. The finite union of closed central triangles is closed, and each of the points $p$ lie in a central triangle, hence so does $q$.

Why does this proof work for convex but not for non-convex? Where did we use convexity?

I do not know if the statement is true for non-convex polygons. I suspect it is not. This is not a counter example. It is just a diagram to stare at. 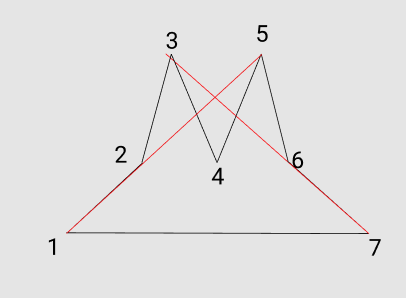 Not the answer you're looking for? Browse other questions tagged combinatorics geometry plane-geometry combinatorial-geometry or ask your own question.

2
Number of lattice points inside a triangle and its area
10
Must a curve of constant width be generated with an odd number of sides?
2
Parallel sides in regular polygons
1
If I have an $n$-gon, for odd $n\geq5$ with all angles equal to the angles of the regular $n$-gon, is my $n$-gon necessarily regular?
3
Least area of maximal triangle inside convex $n$-gon.
1
Enumerative Combinatorial Question on polygons
1
Compute the dihedral angle of a regular pyramid