I am supposed to prove that the graph satisfies the Las Vergnas theorem. Here is the graph:

Las Vergnas theorem is the following: 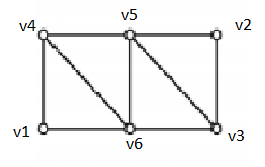 Is there something, which I misunderstood or where is the mistake.

Let me quote the actual theorem (as stated in Berge's Graphs and Hypergraphs, on p. 208 of the 1973 edition):

Here, we want $q=0$, so the conditions are the same as in the question; the point that I am making is that the hypotheses in the question are satisfied if there is any ordering of the vertices that works.

In the case of your graph, if we swap the order of vertices $v_1$ and $v_2$ in your labeling, there will no longer be any pair $(i,j)$ violating the conditions, because the only two vertices in the right positions with the right degrees will be adjacent. So the graph does satisfy the hypotheses of the theorem.

1
Graph Theory: How do we know Hamiltonian Path exists in graph where every vertex has degree ≥3?
1
Ore's Theorem - Graph Theory
3
Definition of "linear graph" in this theorem?
1
On 4-ordered Hamiltonian Graphs
1
Sufficient condition for connectedness
2
Removing egdes connecting a vertex with vertices of higher (or same) degree
0
Las Vergnas theorem - do vertices need to be ordered by their degree?
1
Why in a Hamiltonian walk, the summation of the lengths of the subwalks is less than equal to the length of the hamiltonian walk?
0
Intuition for Ore's theorem