Why do we study prime ideals?

I hope this isn't an inappropriate question here!

I'd like to ask the following (perhaps slightly ill-posed) question: why do we study prime ideals in general (commutative or non-commutative) rings? The situation is somewhat clear to me in some nice cases such as Dedekind rings, but even in slightly more general settings (e.g. general commutative Noetherian rings) the theory becomes rather horrible. What benefit do we gain from an understanding of the prime ideals of a ring?

There is a strong conceptual reason to study the prime ideals of a ring: in algebraic geometry, we can study / think about a ring $R$ using an associated geometric object called $\mathrm{Spec}(R)$, the points of which are precisely the prime ideals of $R$. This idea is one of the many Grothendieck introduced, ushering in "modern" algebraic geometry. 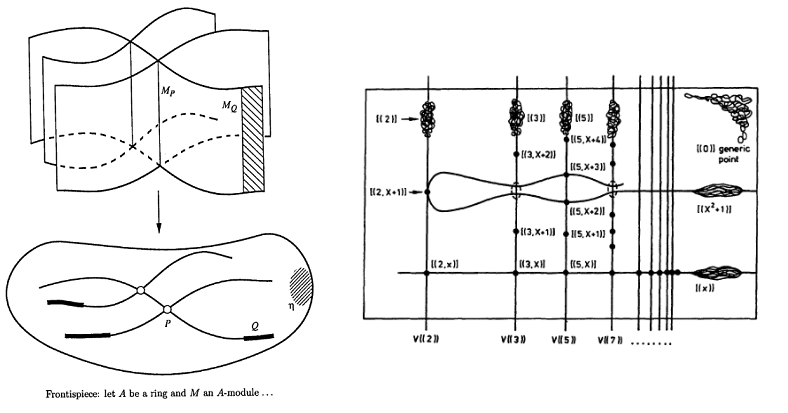 (on the left: the frontispiece of Reid's Undergraduate Commutative Algebra)
(on the right: Mumford's famous sketch of $\mathrm{Spec}(\mathbb{Z}[x])$; note that $\mathbb{Z}[x]$ is not Dedekind.)

One of Qiaochu Yuan's blogposts addresses exactly this question.

The central fact is more or less obvious (that the prime ideals are exactly the kernels of homomorphisms of $R$ into domains) but it does a great job of explaining why that is useful and natural to study.

An answer from algebraic geometry is that the set of prime ideals of a ring satisfy the axioms for a closed set in a topology. My personal elaboration on this answer is the following.

Making this precise amounts to the following:

These three basic properties ensure that the evaluation maps $f\mapsto f(x)$ give each $R_x$ the structure of a quotient ring, and hence each evaluation map corresponds to an ideal of $R$. I like to call this ideal $\ker x$ because I like to think of the points on the space as the evaluation maps. Clearly, from the point of view of the ring $R$, points with the same kernels are indistinguishable, so we can in fact identify the "space" $X$ on which the ring $R$ is a ring of "functions" as simply a collection of ideals of $R$, which we designate as special point ideals.

My answer cannot - and doesn't want - to keep pace with the other learned answers already given, but I'd like to make the point, that prime ideals are dual to ultrafilters, and that the ultrafilters of Boolean algebras (= Boolean rings) correspond to complete theories, which makes them interesting in their own right.

How this could make them interesting in the case of general algebras/rings: I have no idea.

Not the answer you're looking for? Browse other questions tagged soft-question ring-theory ideals or ask your own question.

4
Clarifications on proof of compactness theorem
1
What is the role of prime ideals?

4
A prime poset of ideals
18
Tensor products of p-adic integers
4
Can a product of non-principal ideals be principal, in a local ring?
0
Techniques for Proving a Ring is Artinian?
3
Cases in which the answer to a question about an integer depends dramatically on whether $n$ is prime
3
Semiprimary rings: Sharpest bound for chain lengths of principal ideals