So I want to find the green area which denotes the "waste" when using circle tiling. Circle radius may be assumed to be 1.

Sure, there are multiple ways of doing it, but I want to try solving this using limits. We will select two axis at an angle of 60 degrees and tile the the domain $M$ steps in one direction and $N$ steps in another direction. It should look something like this 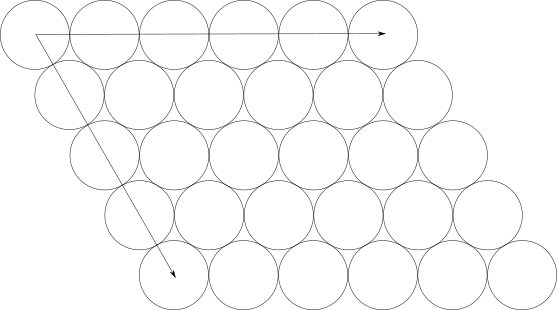 Now, for small number of circles, the area taken by circles looks larger than the area taken by the parallelogram, but that is due to edge effects, which grow linearly with $M$ and $N$. So, if both are very large, I would expect that the edge effects would become negligible, and the ratio of the two areas would allow me to find the desired area of the green segment.

So I have attempted to compute

To my surprise, this ratio is greater than 1. According to my logic, it should be less than 1, accounting for the fact that circles have gaps in between them. What went wrong?

Browse other questions tagged geometry limits area or ask your own question.

4
Ratio between inscribed triangle and overlapping semicircles.
2
Infinite sequences in geometry
10
Stacking circles with $r=\frac{1}{p}$ inside a circle with $r = 1$
0
To optimize fenced area in a semi-ellipse, what a/b should I choose?
9
The largest equilateral triangle circumscribing a given triangle
2
Tiling a rectangle with rectangles, leaving a non-moveable hole
9
What is the expected number of random small circles it takes to cover a large circle?