Is there a way to find the center point of this circle?

I am facing a problem that I have difficulty to solve.

Somewhere between the $x$ axis and this line is a circle. This circle touches both lines, but the dimension and center of this circle are not known.

How can I find the coordinates of the center of the circle?

I can't seem to add an image so I have used an external website to make the drawing.

I now realize that I have over-simplified the problem because it is hard to explain in words. However, now I know that I can send a drawing in another way I would like to post the original problem:

You can see the drawing over here

How can I find the coordinates of the circle?

A drawing of my understanding is below. Please make sure it matches your understanding. We know $\theta$ and the coordinates of $P$. Because the circle is tangent to the two lines, $D$ is on the bisector of the angle. That gives you the slope of the line from the origin through $D$, which gives a relationship between the $x$ and $y$ coordinates of $D$. You can now write the law of cosines for the triangle $ADP$ in terms of the $x$ coordinate of $D$ and solve the equation. 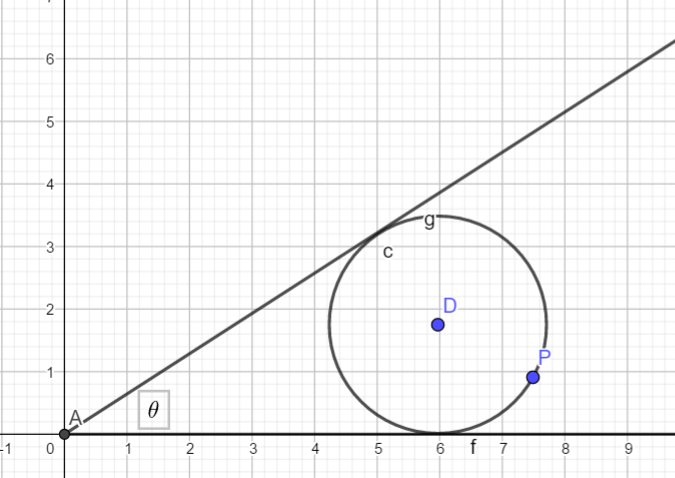 The equation of the line at angle $\theta$ is $$y=x\tan\theta$$ Let's call the coordinates of the center of the circle $(x_c,y_c)$. Then you know that the distance from the center to the line is equal to the distance from the center to point $P$ (note that this is on a parabola with focus $P$, and the directrix is the tilted line). We write this as $$\frac{(x_c\tan\theta-y_c)^2}{\tan^2\theta+1}=(x_c-x_P)^2+(y_c-y_P)^2$$ I've used the formula on this link, but you can just search for it. Since the circle touches the line and the $x$ axis, it means that the center is on the bisector of the angle. Therefore $$\tan\frac\theta 2=\frac{y_c}{x_c}$$ Take $y_c$ from the second equation, plug it into the first one, and you just get a quadratic. One of the solution corresponds to $P$ on the right side of the circle, one on the left. In your case, you want the smaller number.

1
Find a circle that is tangent to a line and a circle.
2
Find the point of a circumference following the line from center to a point in the circle
1
A tangent circle element between 2 intersecting vectors
1
Find Center of Circle Using Triangle Data
1
Prove that the line which connects a point and a circle center and two tangent lines are perpendicular
3
Coordinates of circle center on a line through a point touching other circle
0
How to convert intersection of two lines into an arc?
0
Given y-coordinates, find corresponding x-coordinates of points known to be on a circle with unknown center and radius
0
Given the y-values of points sampled at a constant angle on a circle with unknown center and radius, find corresponding x-coordinates
3
How to get the center of this circle