How does one calculate the homology groups of the Möbius strip?

Any pointers in the right direction is greatly appreciated. Thanks!

algebraic-topology
share|cite|improve this question
edited May 12 '13 at 1:04

I've attached a model for the Möbius band. The vertices are $a$ and $b$. The ones that eventually get glued together are given the same letter. The edges are labeled $A$, $B$ and $C$. There are two edges labelled $A$, and they have arrows. The must be glued so that the arrows agree, i.e. you need to give a half twist before you glue. The arrows on $B$ and $C$ are only there because we must orient simplices. Finally, $\alpha$ is the one face. I don't know how to put a clockwise arrow around it, so please add one. 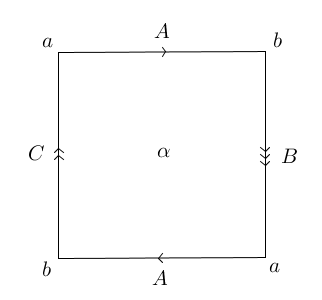 To find the homology groups, we must look at the images and the kernels of the boundary maps. Consider the series of maps $0 \to F \to E \to V \to 0$, where $F$ stands for faces, $E$ for edges and $V$ for vertices. In between each is a boundary map.

Take the usual paper strip that you would glue to make a Möbius strip. If you want to get a simplicial complex, draw a line diagonally from the top corner on the left to the bottom corner on the right, so your paper strip is a union of two triangles.

Your strip now has two triangular faces, five 1-simplices (the four edges of the paper strip, together with the line you drew to divide it into two triangles), and 4 vertices. But when you glue you identify the two edges at either end of the strip, so for the Möbius band there are two faces, four 1-simplices, and 2 vertices.

Now just write down the corresponding simplicial chain complex and compute away!

A slick way of calculating the homology groups here is to notice that the Möbius strip is homotopy equivalent to $S^1$. Then you can apply Corollary 2.11 (Section 2.1) of Hatcher that:

This should make the task much easier.

3
Complicated with the quotient topology (Möbius strip) two distinct quotients
20
Can you really construct a Möbius strip from this model?
9
Homology groups of a tetrahedron
2
Can you compute relative homology using simplicial chain complex?
1
Many questions about a Klein bottle.
3
Topological Intuition behind the 2-Homology of $RP^2$
1
How to make sense of this induced map on homology