Show that $\sin(z) = z$ has infinitely many solutions in complex numbers. Little Picard theorem should help, but using big Picard theorem is undesirable. Thanks a lot!

Using a non trivial result by Picard: $\sin(z) - z$ has an essential singularity at $\infty$. Therefore it attains all values infinitely many times with at most one exception. Since $$\sin(z + 2\pi) - (z+2\pi) = \sin(z) - z - 2\pi$$ one can shift the image over multiples of $2\pi$. By Picard's theorem there cannot be any value (including $0$) that is only attained a finite number of times since only a single exception is allowed.

The function $\sin z - z$ is entire and of order $1$, so if it had finitely-many zeros then the Hadamard factorization theorem would say that

where $p(z)$ is some polynomial and $a$ and $b$ are some complex numbers.

The function $\sin(z)$ is single valued on $S$ and maps onto to the upper half of a solid ellipse with foci $\pm 1$. The lower, left and right sides of $S$ map onto the real interval and the top side onto the elliptic arc. (The following image may help to visualize this.) 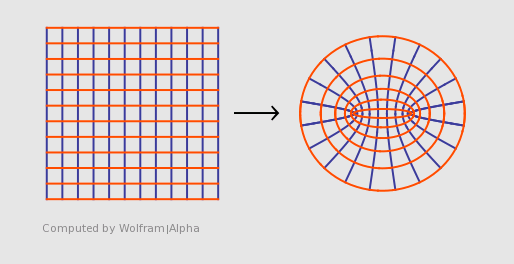 Not the answer you're looking for? Browse other questions tagged complex-analysis complex-numbers roots or ask your own question.

2
By using the Big Picard theorem show that $a$ is unique
2
How do I solve and plot the complex equation
6
Showing that $z^3 e^z = 1$ has infinitely many solutions
3
Is there an analytic function that takes on every value apart from 3 numbers?
13
Does $\sin(x+iy) = x+iy$ have infinitely many solutions?
7
Complex Analysis: Zeros of an analytic function
1
An application of Little Picard Theorem
0
Two confusions on Great Picard Theorem
2
How to solve for $\theta$ in the equation $\sin(2\theta) = \sin(\theta)$ using complex numbers?