Inscribing Platonic solids in each other: why can't you put a dodecahedron in an octahedron?

Given convex polyhedra $P, Q$, say that one can inscribe $P$ in $Q$ if we can find points on the surface of $Q$ whose convex hull is similar to $P$.

If we restrict $P, Q$ to be Platonic solids, we can achieve every case except inscribing the dodecahedron into the tetrahedron, cube, or octahedron; the other $17$ distinct pairs work.

For the $17$ working cases, there are "nice" constructions, where the solids are positioned in symmetric ways with respect to each other. Consequently, such constructions are pretty easy to verify by a combination of symmetry arguments, direct computation of one or two distances, and arguments from degrees of freedom / continuity. To see examples of these pairs, Moritz Firsching's 2018 paper "Computing maximal copies of polytopes contained in a polytope" (PDF link via arXiv.org) shows instances of maximal containment, most of which have "nice" symmetry (or are obviously given by e.g. taking duals). Perhaps the hardest case to see a "nice" construction for is the cube inside the tetrahedron, pictured below (bold edges tangent to the faces): 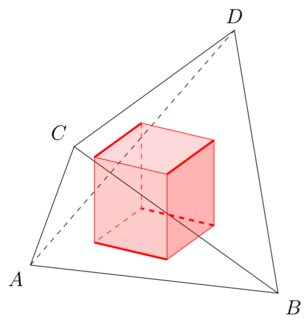 For two of the three impossible cases, I have simple proofs of impossibility:

Is there a conceptually simple proof that this construction is impossible? I realize this is somewhat subjective, but I hope the intended style of argument is clear: reasoning from symmetry and combinatorial incidences, rather than bashing the coordinates of different vertices.

Exactly one tangent face is impossible, since $7$ faces with at most two vertices each is only $14$ vertices, whereas the dodecahedron has $15$ vertices that are not on face $B$ of the octahedron.

In the case of four tangent faces, each of those faces contains one face of the dodecahedron, and there is also a diametrically opposite parallel face of the dodecahedron. The planes of those diametrically opposite faces, together with the four tangent faces of the original octahedron, form a smaller octahedron tangent to $S$ on all eight faces, therefore with a face of the dodecahedron on each face of the octahedron. By inspection, it is not possible to place all five vertices of a regular pentagon on the sides of an equilateral triangle. We can place at most four vertices, none of them at a vertex of the triangle, leaving one inside the triangle. Since each vertex on an edge of a triangle lies on two faces of the octahedron, we have an average of at least three vertices per face, which comes to at least $24$ vertices. Since the dodecahedron has only $20$ vertices, this is impossible.

The case of eight tangent faces is the same as the case of four tangent faces, except that we start with an octahedron tangent to $S$ on all faces rather than having to construct a new one.

Hence it is not possible to inscribe a regular dodecahedron in a regular octahedron.

Not the answer you're looking for? Browse other questions tagged geometry alternative-proof convex-geometry polyhedra platonic-solids or ask your own question.

20
Cleverest construction of a dodecahedron / icosahedron?
3
Irregular analogue of cube and octahedron.
4
Solids that are platonic apart from faces being irregular polyhedra.
1
For certain pairs of Platonic Solids, are the edge-centers and face-centers equivalent?
1
Which convex deltahedra are inscribable in the sphere?
0
Why do we get equiangular lines from Platonic solids that have triangles as faces.
6
Minimum number of faces needed to make regular icosahedron rigid?