Why are there no gaps in real numbers?

I've read been introducted to more rigorous definitions of the reals multiple times, but I'm still having some difficulties wrapping my head around the fact that

For 1, I believe that real numbers cannot be fully ordered otherwise they could be put in a one-to-one correspondence with the rationals (since the rationals are dense in R). If they could be ordered, then we could take the rational number between each real and end up with a corresondence. My though would be that you could make a construction that goes something like this:

Construct the list $\mathbb{R}_2$ as follows. Then take some $r \in \mathbb{R} \wedge r \notin \mathbb{R_2}$ and insert $r$ in a location such that all items to the left of $r$ are less than $r$ and all items to the right are greater than $r$. $r$ will always lie between some elements since $r$ is not already in $\mathbb{R}_2$. It seems like you could continue this construction for at least countably infinite steps, but why would it fail for uncountably infinite number of steps? [Note: I haven't specified how to keep order. I think you could maybe make a tuple with (r,indice) or something similar. I'm not exactly sure how to construct something that keeps track of the order, but I feel there must be some nice way].

For 2, it seems like there should be numbers be gaps in the reals. Or more specifically I feel that the least upper bound of rational numbers doesn't always exist in the real numbers. Consider {1,1/2,1/3,...}. The infimum seems as though it should be greater than 0. In particular, why is that an infinitesimal can't be considered the infimum, since $\frac{1}{n} > \epsilon>0$?

In response to the comments, and me realizing I had not very well articulated my question, I'll add some more specifications on what I meant. I thought that if the reals could be put into an ordered chain that contained all reals numbers, like this: $r1<r2<r3<...<rn$, where every where number is included in this chain, then that would imply that the reals were only as large as the rationals. This is because the rationals are dense in the reals, so it seems like on could do this: $r1<q1<r2<q2<r3<q3<r4<...<qn-1<rn$. But this is clearly wrong, so it seems like the only way to avoid this is to say that its impossible to construction something like: $r1<r2<r3<...<rn$.

I also felt that this was wrong too though, because the surreal numbers are a way to make that chain of real numbers. 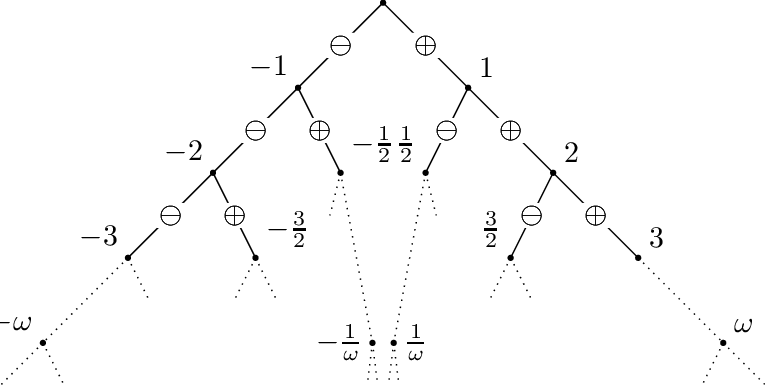 You could take the surreal numbers at a specific day start at the far left, and then order each item as you move to the right. Or, it seems like you could step-by-step/recursively insert real numbers into a set to get the ordered chain of real numbers by inserting the real numbers so that to the left are numbers less and numbers to the right are greater.

So, I was hoping I could get help understanding what I'm doing wrong, and why none of these things prove that the rationals are the same size as the real.

Also, thank you so far to everyone whose commented, and I'm sorry the question wasn't worded very well

The first question is difficult to tackle: the idea you have is too vague to really have a specific point of failure.

I can say some things about the second question though. It's true that there are bigger number systems than the reals and which have lots of new elements lurking between old real numbers. However this does not mean that the reals don't have any holes, at least not in the sense that's meant when we say that. "Every nonempty bounded-below set has a greatest lower bound" is a property of a number system on its own: the fact that $0$ isn't the g.l.b. of $\{{1\over n}: n\in\mathbb{N}\}$ in the sense of the surreals doesn't contradict the fact that it is the g.l.b. of that set in the reals.

"The reals have no holes" has a very specific technical meaning. You can think of it as a statement about a particular kind of new number which we can't add to $\mathbb{R}$. Specifically, any finite surreal number (that is, not bigger than every real and not less than every real) is "stuck to" some real number, in the sense that it's infinitesimally close to exactly one real number. There's no place where you can put a new number "on its own," in a sense. Contrast this with $\mathbb{Q}$: when we add $\pi$ to $\mathbb{Q}$, there's no element of $\mathbb{Q}$ closest to $\pi$, so in a sense $\pi$ really is "off on its own."

(That said, if you're interested in the idea of a "maximally big number system" - which is not what "complete" means in the context of $\mathbb{R}$ - this article is a good source. Basically, the surreals do indeed have a special place of honor.)

Completeness is an internal property—strange as it sounds, you can spot "holes" in the space where limits fail to exist, just by examining these arbitraily-bunched-up ("Cauchy") sequences within the space. For example, the rational numbers $\mathbb{Q}$ are incomplete; you can tell because in $\mathbb{Q}$, the sequence 3, 3.1, 3.14, etc. gets arbitrarily close together, but doesn't converge to any rational number. There's a hole where a limit $\pi$ "ought" to be.

One way of defining the real numbers is as the completion of the rational numbers. It fills in the gaps by defining real numbers as (equivalence classes of) Cauchy sequences, so that a number like $\pi$ is axiomatically defined as the sequence 3,3.1,3.14,3.141, etc.

Of course, even though $\mathbb{R}$ is metrically complete, you can still add other elements to it. You can extend it to the plane $\mathbb{R}^2$, or the complex numbers $\mathbb{C}$, or the surreal numbers $\mathfrak{s}$. You can add new numbers in between, add infinitesimals and infinities, and do many other things besides. But $\mathbb{R}$ by itself is gap-free (complete) because every Cauchy sequence in the space converges to a point in the space;in terms of limits of sequences, it has no holes that need filling.

8
Finding an uncountable chain of subsets the integers