MY ATTEMPT: Firstly I tried proceeding normally. The function does not seem to be defined at the origin $(0,0)$. Now I tried checking behaviour at infinity. $$c=\lim_{x\to\infty}\frac{4xy(x^2-y^2)}{x^2+y^2} $$ Now the very first question that arises is how do we deal with $y$? We do not know if the limit of $y$ as $x$ approaches $\infty$ is $0$, $\infty$ or finite. Therefore we cannot comment on how the function behaves at either infinity. The next thing that we do is look at the derivative. The derivative here is: $$y'= \frac{12xy^2+4y^3-12x^2y+2cx}{4x^3-2cy}$$ Clearly this derivative is also difficult to handle because of the implicit nature of the function. The only takeaway from it is the fact that there exists a vertical asymptote at those points where $$y=\frac{2x^3}{c}\;\;\;\;\;\;...(1)$$ which again being tedious gives this: $$64x^8+(8c-8c^2)x^4+c^3=0$$ which anyone would discard at first look. If we just had to solve equation $(1)$ and our curve we could have tried approximating and playing around with graphs but that does not work here because the graph is what we actually want. Clearly I have ventured the wrong way, correct it is, but too rigorous to be solved.

MY 2nd ATTEMPT: Another train of thought that arises is to try polar coordinates, which, by the way, was also suggested in the book. Doing so, we get the curve to be: $$c= r^2sin(4\theta)$$ Now the problem here is that the polar system is a lot less intuitive compared to the Cartesian coordinate system as the variables deal with distance from the origin and angle with the x-axis. I still do not see a clear way out.

So how do we deal with this? I know that a graphing calculator is the simplest solution, but then I am not a fan, especially in a question that deals specifically with "sketching" a graph. The book is old enough that there weren't any easily available graphing calculators around like we have today. So, could someone describe the technique to sketch this curve or is it that there isn't any?

P.S: I have seen some Stack Exchange questions and browsed the internet but those were simpler ones like $x=f(y)$ or $y^2=f(x)$ type, so I won't be linking them here.

As mentioned in the hint, you can write this as 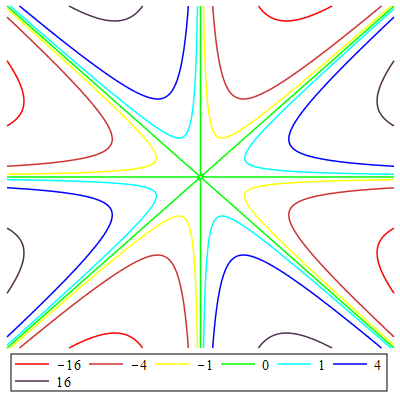