Seeing that a lot of linear algebra is based on matrices and operations on that representation, I wonder at which point came the notion of transposition of a linear map (LM) (or matrix as well). Both definitions seem very different and the linear map one seems a lot more convoluted with all those details on isomorphisms of dual spaces <-> vector spaces and etc... almost like someone tried very hard for both matrix and LM transposes to type the same.

If the answer to that question is that matrix transpose notion came first then it suggests that the "Dual Space" notion was developed/created/discovered as a way to enrich the theory with a way for transposition to work/make sense in terms of linear maps. I say this because, from what I know, only vector spaces have this notion and it seems to have some sort of a more general context waiting to be explored!

Does anyone have any scientific evidence that can answer the question? I'd also appreciate if you could educate me and correct my understanding about this topic or my line of reasoning.

These concepts applied to matrices have been developed rather later, in the early 1920s/1930s (see below). They were almost unknown in the 19th century, even if matrices were invented at that time.

In fact, matrices were completely shadowed by determinants: the transpose, products, etc. of determinants predated for a long time similar operations on matrices.

Here is for example a short excerpt 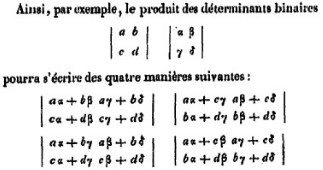 from "Théorie des déterminants et leurs principales applications" (Francesco Brioschi) in its French translation (1856) availaible on the site gallica.bnf.fr showing that people at that time had a good working knowledge of equivalents of $\det(AB)=\det(AB^T)=\det(A)\det(B)$ involving products and transpositions, in the perspective of techniques, computational rules that were not based on a theoretical vision.

It seems you've encountered a particularly ugly definition of the transpose of a linear map. If $T:V\to W$ is a linear map of vector spaces, then its transpose is the linear map $T^*:W^*\to V^*$ defined by $T^*(f)=f\circ T$. It's just composition of linear maps, and it doesn't need any isomorphisms, inner products, etc.

As for your historical question, I'd guess that almost everything was done with matrices, in the 19th century, before linear transformations were developed and simplified these things.

Not the answer you're looking for? Browse other questions tagged linear-algebra matrices dual-spaces or ask your own question.

223
Why do we care about dual spaces?