Suppose I have a free vector $ \vec{w}$ and I have a plane $ P$ described the following way:

Suppose I wish to rotate the component of $ \vec{w}$ in the plane $P$ along an axis parallel to the normal of $P$, how would I write out the rotated new vector $ \vec{w'}$ which has the same component as $ w$ perpendicular to plane and the parallel part to plane as rotated?

I know to start I'd have to split up $ \vec{w}$ into components perpendicular and parallel to plane as follows;

Not sure what I do after this 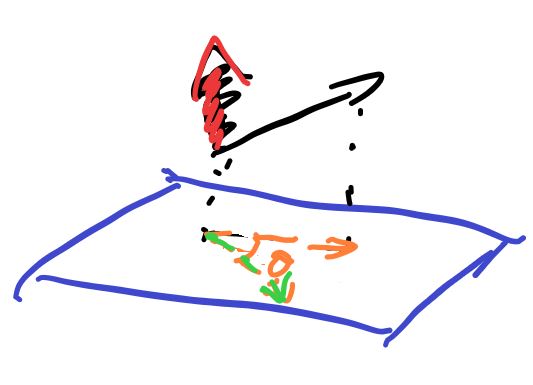 Green= vector part parallel to plane which is rotated

Then $\hat n$ is a unit normal vector to the plane. Further, let

Now to rotate $\vec w$ by angle $\theta$ around an axis perpendicular to $P,$ let

Not the answer you're looking for? Browse other questions tagged linear-algebra vectors or ask your own question.

1
Linear algebra — the intersection of 3 rotated planes
0
Intersection of 3 rotated non-orthogonal planes
0
Visualise all vectors perpendicular to one vector and two vectors in R^3 [Strang P19 1.2.6]
2
Vector Analysis - Finding perpendicular vectors
0
Displacement vector for a cylinder
1
Projection of the vector $\vec{b}=\left(\begin{smallmatrix}3\\-1\\4\end{smallmatrix}\right)$ in some given direction
0
Confused with equation of plane
0
Rotating vector versus dot product
0
Prove that the angle given by the rotation around the cross product axis is the argmin of all possible rotations
0
Does adding a perpendicular component to a vector change its angle?