How many ways can we place $3$ chess pieces so that none are in the same column or row? Chess pieces are distinguishable, so we can imagine them as one pawn, one knight, one rook. A chess board is a $8\times 8$ grid.

However, when I attempted the question, I thought that we could do $(8 C 3)\cdot (8 C 3)$, which first counts the number of ways to choose $3$ different columns and then $3$ different rows. However that answer seems to undercount. So why is it wrong and why is it undercounting?

Adding your method and completing it which works too - 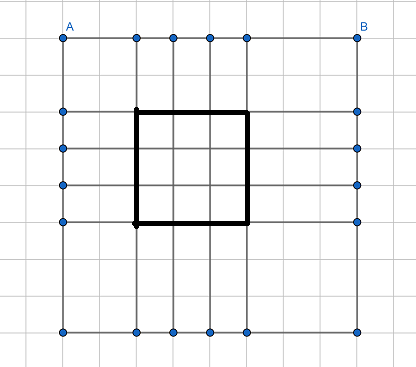 This gives you $9$ squares. Please see one of the cases in the picture. Now you can place the first piece on any of the $9$ squares. That leaves $4$ choices for the next piece. The last one has just one places to go to.

May be an easier way to look at it is

Not the answer you're looking for? Browse other questions tagged combinatorics combinations chessboard or ask your own question.

1
Is there a closed form for the number of ways to put up to $k$ chess pieces on a board with $n$ squares?
1
Arrangement of $4$ pieces on a chess board
2
How many ways can I place four distinct pawns on the board such that each column and row of the board contains no more than one pawn?
10
Place $8$ rooks on a $10\times 10$ board.
2
Prove by using the Pigeonhole Principle that there are at least $5$ of the $41$ chess pieces on the $10×10$ board that are not on the same row.
2
In how many ways can you place 32 chess pieces on a standard (8x8) chessboard?
3
No. of ways of selecting 3 squares when they do not lie in same row, column, or diagonal
2
How many ways can $4$ distinguishable pieces be placed on an $8\times8$ chessboard, such that no $2$ pieces are in the same row or column?