Given an n-dimensional ellipsoid in $\mathbb{R}^n$, is any orthogonal projection of it to a subspace also an ellipsoid? Here, an ellipsoid is defined as

I'm just thinking about this because it gives a nice visual way to think about least-norm regression.

The intersection of any conicoid and a first degree equation plane illumination terminator between two tangential points is a conic section. It can be proved by elimination to the conic second degree equation. 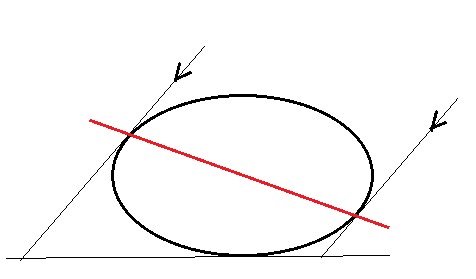 There are already a good answers presented, but I want to add the also one may think in a following way :

The orthogonal projection defines some subspace $\langle e_1, e_2 \ldots e_n \rangle$, and we perform an orthogonal transformation $R^{T}$, such that the matrix $A$ transforms into $R^{T} A R$, and in the rotated basis, the first $n-1$ components will correspond to that subspace. After the rotation, matrix $A$ preserves its positive definiteness, and the restriction to the $(n-1) \times (n-1)$ will be positive definite by the Sylvester's critertion. Therefore this block would define an ellipsoid in one dimension lower.

66
Geometric intuition for the tensor product of vector spaces
8
Geometrical interpretations of SVD
0
Perspective Projection of Ellipsoid to Ellipse: Solving for standard form ellipse equation
4
Given three distinct points on a sphere, find the unique round circle they live in
18
Understanding Linear Algebra Geometrically - Reference Request
12
How to understand the exponential operator geometrically?
5
Is there a name for the set defined by the Minkowski sum of circles in orthogonal planes?