In (relatively) simple words: What is an inverse limit?

I am a set theorist in my orientation, and while I did take a few courses that brushed upon categorical and algebraic constructions, one has always eluded me.

The inverse limit. I tried to ask one of the guys in my office, and despite a very shady explanation he ended up muttering that "you usually take an already known construction."

Since I am not too familiar with categories, the explanation most people would try to give me which is categorical in nature seems to confuse me - as I keep asking this question over and over every now and then.

Could anyone explain to me in non-categorical terms what is the idea behind an inverse limit? (I am roughly familiar with its friend "direct limit", if that helps)

(While editing, I can say that the answers given so far are very interesting, and I have read them thoroughly, although I need to give it quite some thinking before I can comment on all of them right now.)

I like George Bergman's explanation (beginning in section 7.4 of his Invitation to General Algebra and Universal Constructions).

We start with a motivating example.

Suppose you are interested in solving $x^2=-1$ in $\mathbb{Z}$. Of course, there are no solutions, but let's ignore that annoying reality for a moment.

Added. Bergman here inserts the quote, "If the fool will persist in his folly, he will become wise." We obtained the sequence by stubbornly looking for a solution to an equation that has no solution, by looking at putative approximations, first modulo 5, then modulo 25, then modulo 125, etc. We foolishly kept going even though there was no solution to be found. In the end, we get a "full description" of what that object must look like; since we don't have a ready-made object that satisfies this condition, then we simply take this "full description" and use that description as if it were an object itself. By insisting in our folly of looking for a solution, we have become wise by introducing an entirely new object that is a solution.

This ring is the $5$-adic integers; since an integer is completely determined by its remainders modulo the powers of $5$, this ring contains an isomorphic copy of $\mathbb{Z}$.

More generally, assume that you have a system of, say, rings, $\{R_i\}$, indexed by an directed set $(I,\leq)$ (so that for all $i,j\in I$ there exists $k\in I$ such that $i,j\leq k$), and a system of maps $f_{rs}\colon R_s\to R_r$ whenever $r\leq s$ which are "consistent" (if $r\leq s\leq t$, then $f_{rs}\circ f_{st} = f_{rt}$), and let's assume that the $f_{rs}$ are surjective, as they were in the example of the $5$-adics. Then you can think of the $R_i$ as being "successive approximations" (with a higher indexed $R_i$ as being a "finer" or "better" approximation than the lower indexed one). The directedness of the index set guarantees that given any two approximations, even if they are not directly comparable to one another, you can combine them into an approximation which is finer (better) than each of them (if $i,j$ are incomparable, then find a $k$ with $i,j\leq k$). The inverse limit is a way to combine all of these approximations into an object in a consistent manner.

If you imagine your maps as going right to left, you have a branching tree that is getting "thinner" as you move left, and the inverse limit is the combination of all branches occurring "at infinity".

If the directed set has no maximal elements, but the structure maps are not surjective, it turns out that no element that is not in the image will matter; essentially, that element never shows up in a net of "successive approximations", so it never forms part of a "consistent system of approximations" (which is what the elements of the inverse limit are).

Consider a sequence of inclusions

with an inverse limit $X$. Then $X$ is precisely the intersection of the $X_i$. The key thing here is that a point in the intersection gives you a point $x_i$ in each of the $X_i$, such that $x_{i+1}$ gets mapped to $x_i$. This is kind of silly and clear since you're really talking about the same point, just in the context of different containing sets, but it sets the stage for the more general inverse limit.

More generally, you can have maps between the $X_i$ that are not inclusions.

In this case, you can build an intersection-like object by taking a "point" in it to be a set of points, one from each $X_i$, such that each one is mapped to the previous. A better way to describe this is as a subset of the product $\Pi X_i$, namely points $(x_1, x_2, ...)$ such that $x_{i+1}$ maps to $x_i$. This also gives us a handy topology for this set, namely the induced topology from the product topology.

So say, for example, that $X_1$ is a point, $X_2$ is two (discrete) points, $X_3$ is four discrete points, etc., and each map is some two-to-one map. Then since each point has exactly two preimages, a point in the inverse limit is basically a choice of preimage (say, 0 or 1) at each $i$. The product topology makes these choices "close" if they agree for a long time, and so you may be able to then understand why the inverse limit is the Cantor set.

Basically, I think of the inverse limits as "infinite sequences of preimages", with a topology that makes two sequences close if they stay close to each other for a long time.

A fun exercise: Let all the $X_i$ be circles, and let the maps from $X_{i+1}$ to $X_i$ be degree 2 maps (say, squaring the complex numbers with modulus 1). Understand the inverse limit of this system (it's often called a "solenoid").

Hopefully that helps you get a different perspective!

Here's how I think of inverse versus direct limits. The following should not be taken too seriously, because of course inverse limits and colimits are completely dual. But in many of the categories one tends to work with daily, they have a somewhat different feel.

In practice, inverse limits are a lot like completions: one has a tower of spaces $X_n \to X_{n-1} \to X_{n-2} \to \dots$ and one wishes to consider the space of "Cauchy sequences": in other words, one has a sequence $(x_n)$ such that $x_n \in X_n$ (this is the Cauchy sequence) and the $x_n$ are compatible under the maps (which is the abstract form of Cauchy-ness). For instance, the completion of a ring is the standard example of an inverse limit in commutative algebra. Here the $X_n$'s (which are the quotients of a fixed ring $R$ by a descending sequence of ideals $I_n$) can be thought of as specifying sets of "intervals" that are shrinking with each $n$, so an element of the inverse limit is a descending sequence of intervals. Perhaps the reason that inverse limits feel this way in many categories of interest is that many categories of interest are concrete, and the forgetful functor to sets is corepresentable, so that (categorical) limits look the same in the category and in the category of sets. In this case, inverse limits are given by precisely the construction above: it is a kind of "successive approximation."

Direct limits, on the contrast, are much more like unions. Here the picture that I usually keep in mind is that of a sequence of objects in time that gets wider as time passes, even though this is not necessarily accurate: in practice, one often wishes to take direct limits over non-monomorphisms. But the construction of a direct limit in the category of sets (and in many concrete categories: often, it happens that the forgetful functor also commutes with direct limits, and one deeper reason for that is that the corepresenting object is relatively small, and small objects have a tendency to commute with filtered colimits because of the above union interpretation) is ultimately the quotient of the disjoint union of the sets such that each element of a set $X_n$ is identified with its image in the next one. Since ultimately it feels like taking a union, direct limits tend to behave very nicely homologically: most often, they preserve exactness. Inverse limits, by contrast, do not usually preserve exactness unless one imposes extra conditions (such as the ML condition).

This has puzzled me for a long time, until I came across the following example that should appeal to a set theorist:

The underlying directed set is simply $\mathbb{N}$ with the natural order. The partitions together with the projections form a projective system:

Since all (non-identity-)projections can be made up from projections of the form $\pi_{n(n+1)}$, we can rewrite this as

So the inverse limit is simply the set of infinite paths in the tree formed from this sequence of partitions.

There a related approaches in probability theory and measure theory as approaches to generalize the Daniell-Kolmogorov extension Theorem. Studying projective limits of probability spaces was pioneered by Salomon Bochner. A typical paper in this strand of literature is this paper by Kazimierz Musiał.

A beautiful (and very short) paper that gives an example in which the projective limit is empty even though all projections are surjective is this note by William Waterhouse. 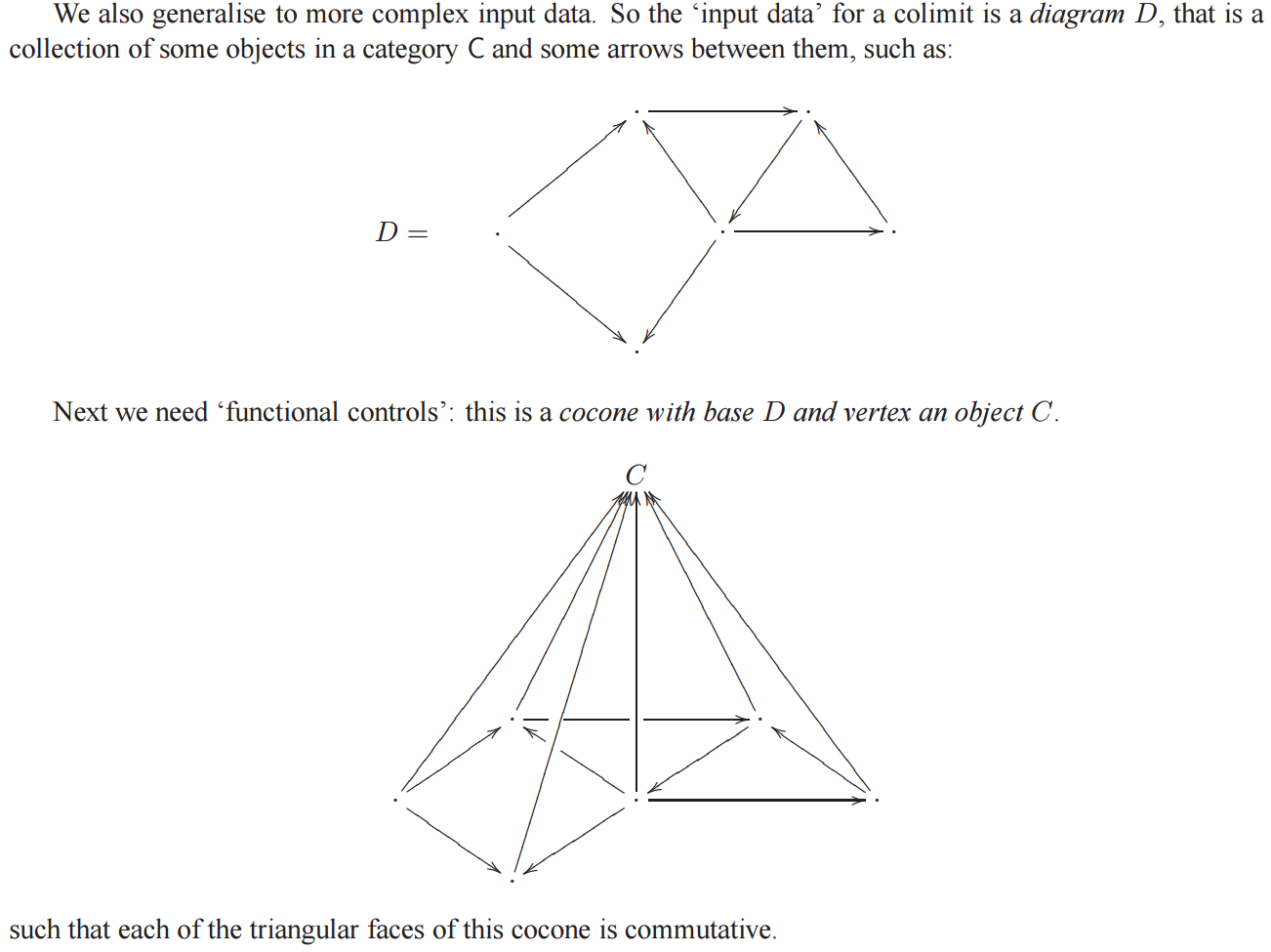 They describe it through a story about people sending emails to each other.

I'm currently dabbling around in a category where morphisms are refinements of computer programs, in the sense that they are functions $f : X \rightarrow Y$ from a program refinement (an implementation) $X$ to a program specification $Y$.

As an extra: maybe my own question about Directed and projective limit in Rel helps in looking at the notion in a different way. In Rel, where the two types of limit coincide, my intuition is that a net of relations simply results in 'lines' connecting points in a disjoint union, and the 'infinite' lines form a new object, the limit.

Not the answer you're looking for? Browse other questions tagged category-theory intuition universal-algebra limits-colimits or ask your own question.

14
Books/lecture notes/videos on category theory for programmer
10
Where does one learn the algebraic geometry needed for topos theory?
16
Algebraic geometry: difference between variety approach and scheme approach?
5
References for the threefold categorical equivalence of compact Riemann surfaces?
3
Homology of direct limit/ homology of a CW complex
2
What is a presentation of a Lawvere theory formally, and how do you generate the associated Lawvere theory?
5
What makes two things (or two representations of a thing) “the same”?