Formula for the area of a rhombus

Can you prove the following claim? The claim is inspired by Harcourt's theorem.

In any rhombus $ABCD$ construct an arbitrary tangent to the incircle of rhombus . Let $n_1,n_2,n_3,n_4$ be a signed distances from vertices $A,B,C,D$ to tangent line respectively, such that distances to a tangent from points on opposite sides are opposite in sign, while those from points on the same side have the same sign. Denote the side length of rhombus by $a$ and the area of rhombus by $A$ , then $a(n_1+n_2+n_3+n_4)=2A$ 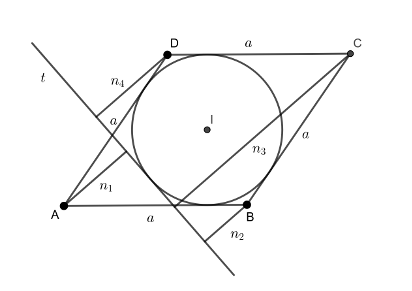 GeoGebra applet that demonstrates this claim can be found here. I tried to adapt the proof of Harcourt's theorem given in this paper but without success.

Not the answer you're looking for? Browse other questions tagged geometry euclidean-geometry plane-geometry tangent-line quadrilateral or ask your own question.

2
Formula for the area of a regular convex pentagon

3
What do the Purser's theorem says?
4
Proving 4 points on a circle.
5
A generalization of Bottema's theorem
5
Six points on an ellipse: generalizing Conway's Circle Theorem
2
Formula for the area of a regular convex pentagon
3
Two triangles of equal area
2
An ellipse determined by circumcenters
4
Three equilateral triangles
0
Excircle and parallelogram