I have a very large data set (roughly 11,000 points) that follow a roughly exponential curve with random variation. Here's a small sample of my data set: 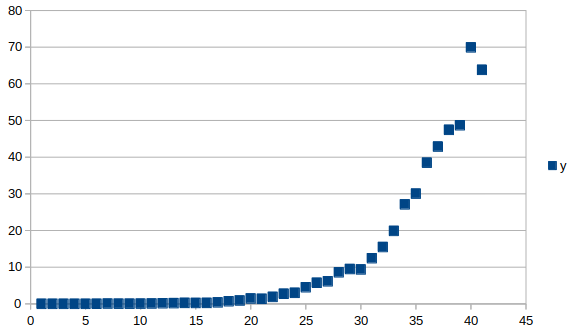 The underlying exponential function follows a curve a*b^x, not a*e^(b*x). In the case of the graph above, the equation is something like 0.05 * 1.195^x (I don't know the exact values)

My aim is to find the two parameters (a and b) that best fit the data. If the equation were of the form a*e^(b*x) then I could use standard linear regression techniques, but that's not the case.

So far I've taken the approach of computing the sum of squared errors (for all 11,000 data points) and attempting to minimize this error function. I've had varying degrees of success with this:

In trying to research the mathematics involved in non-linear optimization so I can improve my naive optimizer, I keep stumbling upon recurring terms that I don't fully understand. Like whether a function is "Lipschitz", or whether the function is "convex".

My first question is: Given the definition of my error function (the sum of squared differences between an exponential function and a data set that is roughly exponential), what properties would my function have? Is it convex? Is it "Lipschitz"?

My second question is: Am I overdoing this? Is there an easier solution?

Your model is a pure exponential $$y=a\, b^x=a\, e^{x\log(b)}=a\, e^{cx}$$ but it is nonlinear with respect to its parameters; so you need some reasonable guesses to start.

Not the answer you're looking for? Browse other questions tagged exponential-function nonlinear-optimization regression or ask your own question.

2
How to prevent a convex optimization from being unbounded?
0
Exponential least squares biased to small y?
0
Substitution yielding linear function for least squares fitting
0
Regress the mean/stddev of a data set resembling a cumulative gaussian distribution?
3
Basic exponential regression
0
Understanding the lower and upper limit of a graph