Every nonidentity element in a free group $F$ has infinite order

I'm trying to prove that every nonidentity element in a free group $F$ has infinite order. I'm really new on free groups and I found this subject really strange I couldn't understand it very well yet, I need a help or a hint to solve this question.

I attached the definition of free groups: 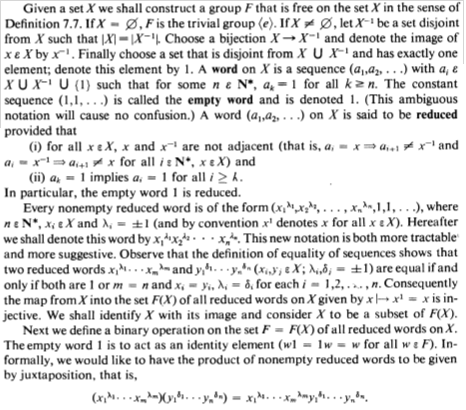 A free group $F$ on a set of symbols $S$ is the set of all possible reduced words formed from the symbols and their formal inverses, with multiplication given by concatenation and reduction. A word is reduced if no symbol appears next to its formal inverse in the word.

For a simple example, let's consider the free group on the $2$ symbols $x$ and $y$. The following is a list of all possible reduced words of length less than or equal to $2$:

This product satisfies the group axioms, and we see that $\varnothing$ is the identity of the group.

I recommend playing around a bit with arbitrary elements and their concatenations to get a feel for how elements multiply. Specifically, try to write down an element with finite order, and see what happens.

Intuitively, a free group $F$ on a set of generators $S$ is the most economic way of turning $S$ into a group without introducing any relations among the generators other than what is absolutely necessary in order to obtain a group. If $g\in F$ is a non-identity element, then it can't satisfy the relation $g^n=e$, for $n>0$, since that would be an extra relation which is not necessary for $S$ to be turned into a group. So, all non-identity elements have infinite order.

To prove it, here is a first step. Let $g\in F$. Then $g$ can be represented as a word in the generators $S$ and their formal inverses, and assume it's written in such a way the word can't be reduced (i.e., no adjacent $s$ and $s^{-1}$). Suppose the first letter is $s$. If the last letter is not $s^{-1}$, then the length of any power $g^n$ will be at least the length of the word you started with (since the only way for it to become shorter is for the first and last letter to cancel, which, under the assumption, can't happen). Thus, the only way for any power of $g$ to become the identity (i.e., a word of length $0$), is for the original word to have length $0$, i.e., $g=e$. Now analyze what happens if the first and last letter of $g$ are inverses of each other.

Let $F$ be a free group over the generator set $X$. Assume $F$ has elements of finite order. As element of $F$, we can write these elements as reduced words with letters from $X\cup X^{-1}$ and their inverses. Let $l(\omega)\in\mathbb N_0$ denote the length of word $\omega$, that is (in your posted definition) the number of sequence terms that are $\ne 1$. Among all elements $\ne1$ of finite order select one element $\alpha$ that has minimal length $l(\alpha)>0$.

This has been satisfactorily answered but I originally came here looking for a proof that appealed to the universal property and without so much explicit computation on the reduced words. I didn't find it so here's my stab.

Not the answer you're looking for? Browse other questions tagged abstract-algebra group-theory free-groups or ask your own question.