Motion of Points around a Triangle

Three points are located at the vertices of an equilateral triangle whose side equals s. They all start moving simultaneously with velocity v constant in modulus, with the first point heading continually for the second, the second for the third, and the third for the first. How soon will the points converge?

The problem is famously solved in the reference frame of a particle (say $A$). According to particle $A$, particle $B$ is approaching it with a constant relative speed of $(v\cos(\pi/3)+v)=3v/2,$ and since the initial side length of the triangle was "$s$", time taken by them to meet will be $t=2s/3v$.

But from Ground Frame, it is clear that the particles are accelerating (since particles follow the triangular spiral shown in the figure below). 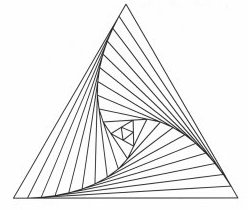 What I got so far: At any instant in time, the particles are at the vertices of an equilateral triangle, and instantaneously, any particle is in a circular motion about the centroid of the triangle with the radius of the circle decreasing with time. Thus, the acceleration vector of a particle at any instant in time will be directed towards the centroid of the triangle. 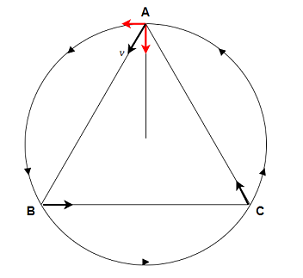 From the figure above, we get that the magnitude of acceleration vector at any time is $a=\frac{v_{tangential}^2}{r}=\frac{(v\sin(\pi/6))^2}{R-v\cos(\pi/6)t}$ where R is the initial distance of a vertex from the centroid of the triangle. Thus, at any instant in time, according to particle $A$, particle $B$ should have an acceleration of $|\overrightarrow{a_B}-\overrightarrow{a_A}|=2a\cos(\pi/6)=\sqrt3a$.

So, why according to particle $A$, particle $B$ is in uniform motion? What happens to their acceleration vectors while frames are changed? I might be missing a very obvious fact here, and if that is the case, please let me know.

As correctly noted, the scenario of this problem resembles that of a uniform circular motion, i.e. a type of motion where an object moves among a circular path with a constant speed. Differently from one-dimensional problems, where objects with constant velocity have zero acceleration, in 2D or 3D problems an object can have acceleration if it motion follows a curved trajectory. This is the case of uniform circular motion, in which a particle with constant velocity $v$ moving on a circular trajectory with radius $R$ is subjected to a centripetal acceleration with magnitude $v^2/R$, directed along the radial director towards the center of the circle. The role of centripetal acceleration is to change the direction of the velocity vector, so that the motion remains tangential to the path.

However, in the problem described by the OP, we are not dealing with a true uniform circular motion. The similarity comes from the fact that, at any point in the path of the particle, we rotate and scale the equilateral triangle to reproduce the initial one. Actually the three points do not travel a circular path, but rather a spiral. Therefore, another acceleration component must necessarily exist that transforms the circular path into a spiral. 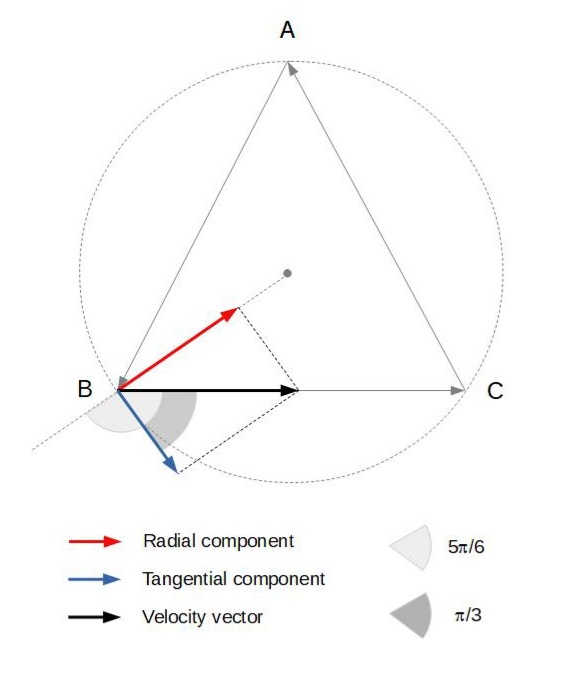 Assuming that, for the radial vector, positive values are directed externally, the velocity vector $\textbf{v}=v$ is given by

Note that, using the standard dot notation for time derivatives, the coefficients of the last equation satisfy the relations $-v\sqrt{3}/2=\dot{r}$ and $v/2=r\,\dot{\theta}$. This last relation can also be written as $\dot{\theta}=v/(2r)$, and will be used in the next steps.

The acceleration vector is obtained by differentiating the velocity equation:

and substituting $\dot{\theta}=v/(2r)$ we finally obtain

The figure below shows the acceleration vector, whose magnitude is $v^2/(2r)$: 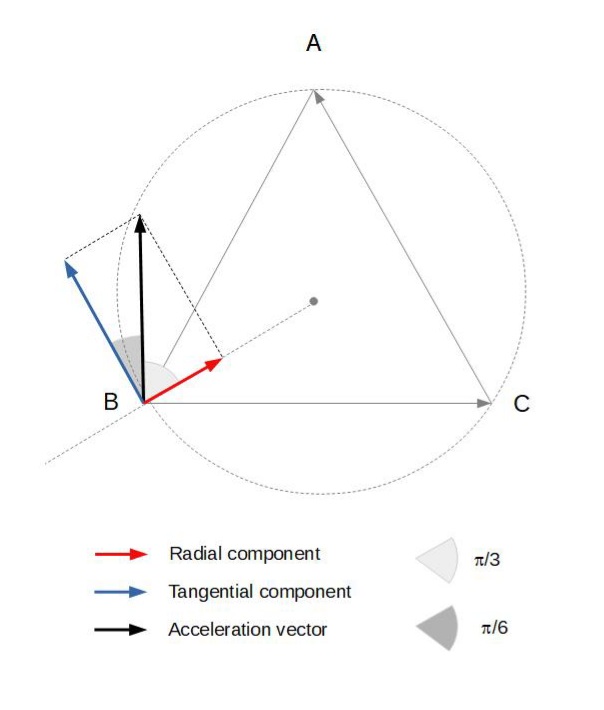 It is also clear that, if we consider two of the three particles and try to describe the motion of one of them from the others' point of view, the resulting vectors are still perpendicular.

In conclusion, the scenario of the OP is characterized by moving points whose acceleration vectors are perpendicular to the corresponding velocity vectors. As stated at the beginning of this answer, this is a classical situation where velocity is constant, and this explains why, according to any of the three particles and from its frame, the other two are in uniform motion. Just to provide a very intuitive and simplified scenario that illustrates well the situation of a constant speed with velocity vector perpendicular to the acceleration vector, we can think of an observer stationary at the center of an Archimedean spiral and a second observer who travels the spiral at a constant speed, so that the distance between them decreases linearly. From the point of view of the stationary observer, the running observer has a constant speed and the distance between them decreases uniformly, although the running observer has not zero acceleration.

Not the answer you're looking for? Browse other questions tagged vectors classical-mechanics kinematics or ask your own question.