What theory of logic or types considers the "category of propositions"?

Was wondering if there was a theory already out there that considers the "category $\text{Prop}$ of propositions". It is a preorder (at most one arrow between two propositions), in which $A \to B$ means that if the proposition $A$ is proved, assumed, or defined true then $B$ is a (similarly) true proposition. Arrows compose associatively when the objects take on positive truth values. And so a category is formed.

Note that the category contains not just true propositions but any proposition. An arrow will connect two possibly false propositions when assuming one would prove the other true. I guess this would come in handy when doing a long proof-by-contradiction.

Question. Was wondering what theory most closely mimics this situation, since usally in proof assistants $A \implies B \implies C$ is read right-associatively: $A \implies (B \implies C)$. Or in other words we can't speak of a category where $\implies$ is data of an arrow (since associativity of composition is dropped for (mostly) philosophical reasons). 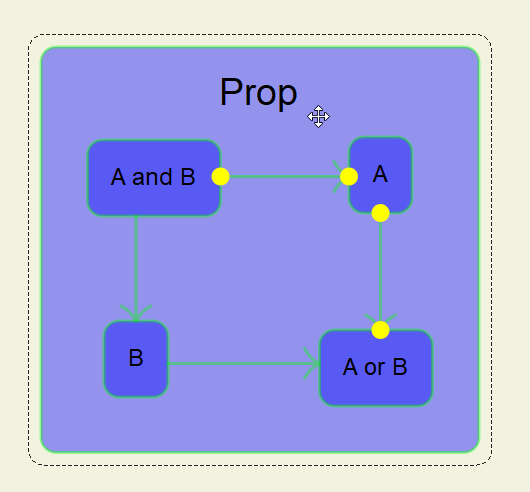 then the categories you get this way are precisely the bounded lattices. If you further require that

then you get precisely the Heyting algebras. These are a setting for doing intuitionistic logic, in which the law of excluded middle doesn't necessarily hold. See this blog post for a bit more detail.

(The fact that $\Rightarrow$ isn't associative has nothing to do with whether or not composition is associative.)

That's the "small" way to do it. The "big" way to do it is to work in a topos, regarded as a category of types, and think of the subobject classifier $\Omega$ as being the object corresponding to the type of propositions. Hence a proposition is a morphism $1 \to \Omega$, or equivalently a subobject of the terminal object $1$ (a subterminal object). The relationship between "small" and "big" is that the subobject classifier of a topos is an internal Heyting algebra object and so $\text{Hom}(1, \Omega)$ is a Heyting algebra (in sets).

What you're describing is basically the Lindenbaum order/algebra. Basically, for any theory $T$ in any logic $\mathcal{L}$ we get a partial preorder of $\mathcal{L}$-sentences with respect to $T$-provable entailment. Quotienting out by the right notion of "equivalence modulo $T$" - which is usually, but not always, just $\varphi\sim_T\psi\iff T\cup\{\varphi\}\models\psi$ and $T\cup\{\psi\}\models\varphi$ - yields a genuine partial order, and basic syntactic operations lift to algebraic operations on this partial order. For example, the Lindenbaum algebra of any first-order theory is a Boolean algebra.

Now the above isn't really category theoretic per se since category theory really shines when we can have multiple morphisms between the same objects: the simpler order-theoretic language suffices. However, things change when we consider specific proofs rather than mere provability: we can whip up categories whose objects are sentences and where a morphism $A\rightarrow B$ is a proof of the sentence $A\implies B$, with "proof composition" given via a fixed method of combining conditional proofs (e.g. maybe we have a single rule in our system which lets us do this). We may alternatively want to look at proofs "up to equivalence" in some sense, although it's not at all clear when two proofs are the same. There's a fair amount of material here, although I'm not familiar with it myself; the discussion here seems like it might be a good starting point.

Not the answer you're looking for? Browse other questions tagged category-theory propositional-calculus math-software proof-theory type-theory or ask your own question.

16
The category of theorems and proofs

0
Coproduct of two modules
1
Proving cardinality of coproduct presentation is unique without choice?
1
Introduction and elimination rules for type-theoretic equalizers/coequalizers/pushforwards/pullbacks
3
Infinite coproducts in Abelian categories.
4
In a category, does the composition morphism need to exist?
1
Canonical Isomorphism before Category Theory