Stability of 'min' versus 'argmin' in nested optimization problems

In reading paper [1], there is a comment about the numerical stability of 'min' and 'argmin' operations in optimization which I don't understand. For background, there is a variational characterization of two functions $\overline{Q}_X$ and $Q_X$, (I don't think the details of them are important)

These formulas are useful for incorporating $\overline{Q}_X$ and $Q_X$ into optimization problems since minimization over $p$ can be done through joint minimization with an auxiliary variable x. However, the author makes a comment, which I paraphrase: "As the formulas above underscore for anyone familiar with the relative behavior of 'min' and 'argmin' in numerical optimization $Q_X$ is inherently less stable than $\overline{Q}_X$".

Can anyone elaborate upon this comment? Evidently I am not familiar with the relative behavior between 'min' and 'argmin'. He is saying that 'min' operations are more stable than 'argmin' operations? Why? I think I see that using 'min' rather than 'argmin' is easier to model, but I'm not sure I see the relevance of stability.

As an extremely simple example, consider

as $a$ varies from a small positive number to a small negative number.

Here is a Desmos graph you can play with to see what happens, or just look at these two screen shots: 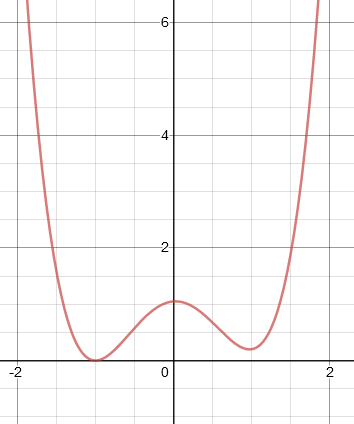 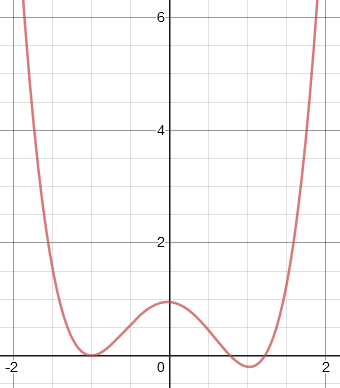 You can see how the min moves continuously from zero to small negative values, but the argmin jumps from $x = -1$ to $x = +1$.

If there are no restrictions on the function $f$, then the statement made about the "stability" of the two functions is false.

It is true that software which minimizes the value of a smooth function $f$ will tend to compute the value of the minimum $y=f(r)$ much more accurately than the location $x=r$ of the minimum. This is a consequence of Taylor's theorem.

We conclude that $f(r)$ is computed more accurately than $r$.

Of course this does not preclude the possibility of computing $r$ accurately. In particular, we can try to solve the equation $$f'(x) = 0$$ with respect to $x$. The set of solutions will certainly include $r$.

The real question which must be investigated is the conditioning of the two functions $$p \rightarrow Q_X(p) \quad\text{and}\quad p \rightarrow \bar{Q}_X(p).$$

The terms "conditioning" and "stability" are often used as if they are equivalent. They are not.

Constant functions are well-conditioned and have the smallest possible condition number, i.e., zero.

Not the answer you're looking for? Browse other questions tagged optimization numerical-methods maxima-minima numerical-optimization or ask your own question.