Consider a convex quadrilateral with vertices at $𝑎,~𝑏,~𝑐$ and $𝑑$ and on each side draw a square lying outside the given quadrilateral, as in the picture below. Let $𝑝,~𝑞,~𝑟$ and $𝑠$ be the centers of those squares: 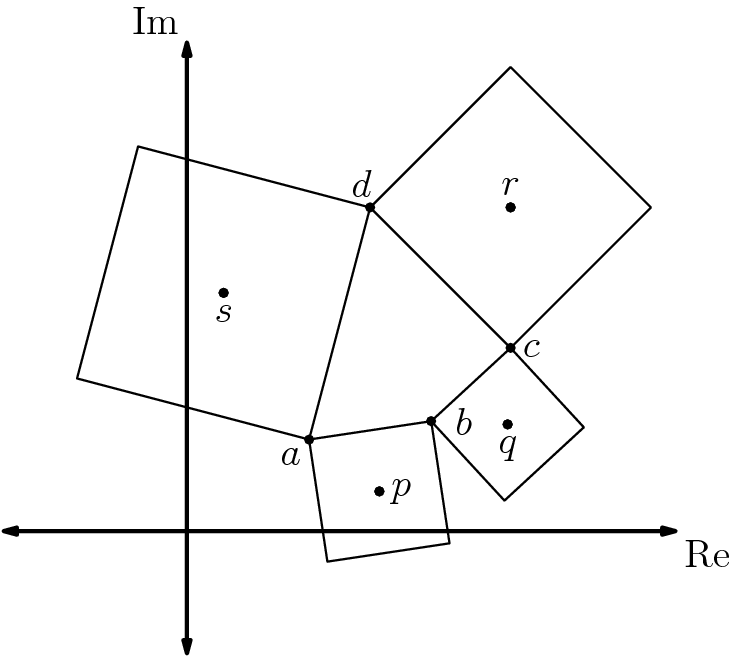 I think this problem has been asked before, but they don't give any good hints. I don't really know where to start. I tried finding $p$ first by finding $(p-a)$ and $(p-b)$. I tried another way by translating $a$ to the origin. I haven't been able to go farther than this.

I think I have an idea for part $b$ using similar triangles and things, but part a is really confusing.Thank you!

Does it matter which point I translate to the origin?

For reference, this is van Aubel's theorem; a proof can be found in Chapter 1 of Tristan Needham's wonderful text Visual Complex Analysis.

4
Prove for $x$, $y$ and $z$
0
How do I simplify a radical within a radical in this half-angle problem?
2
Given roots (real and complex), find the polynomial
3
elementary geometry/algebra
6
Finding the square root of $6-4\sqrt{2}$
0
Geometrical Application of Complex Numbers
2
Decide if denesting is at all possible
1
Find a value of $a$ for which line segment equals 4
0
Function that describes this relation