How to find y given an x of this implicit equation

This really got me thinking and I honestly have no idea. I’m guessing we don’t need the modulus sign given that is a hint but why? We were given an initial value problem:

and the following "solution":

If you have not done numerical methods so far (Regula Falsi, Newton Raphson &c.) then an approximate way is to paper plot the graph of (inverse) function and from it read off approximate $y$ for a given $x:$

The online graphing calculator Desmos can do this for us (click on image for larger size): 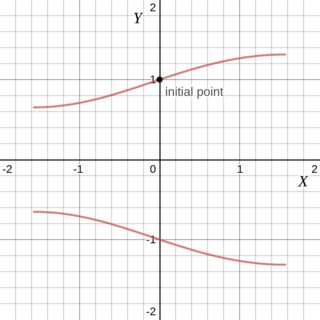 Keep in mind that by convention $\sin^{-1}$ here only returns $x \in [-\pi/2,+\pi/2]$. The two branches correspond to using the absolute value of $y$, but since the initial point $(0,1)$ is on the upper branch, the continued solution remains on that branch. Visualize the complete solution by reflecting that upper branch backward and forward to yield a periodic "wave".

Given your background, I'll make some suggestions about how one might try to solve:

There are many root finding algorithms, and since calculus knowledge is assumed in any differential equations course, Newton's method is not excluded as a possibility. First year calculus courses often make mention of it in connection applications of the derivative or (later on) with power series, etc.

But there is an approach you can test out with a spreadsheet application: reframe the root-finding problem as a fixed-point problem.

A fixed-point iteration comes about if we can rewrite $f(y) = C$ in the form:

Then with a suitable "initial guess" $y_0$, one hopes that the sequence:

will converge. If it does, and function $g(y)$ is continuous, then the limit of that iteration will satisfy $y = g(y)$ and hence (if we did the algebra correctly) also satisfy $f(y) = C$ as originally desired.

There are many ways to do this, and indeed Newton's method falls into this pattern of "root finding" too. With a bit of experience one learns that the goal is to choose a rewritten $y = g(y)$ so that $g(y)$ varies slowly with $y$. Indeed one measure of this is that $|g'(y)| \lt 1$ in the region where we seek a solution, and sometimes this "contraction mapping property" will come up in a differential equations class in the treatment of solutions to nonlinear ODEs (which the currently initial value problem gives us an example of).

In any event I'd propose putting the rapidly changing part of $f(y)$, the $y^2$ term, on one side of the equation and the slowly changing part on the other side, lumped with the "constant" term $C = \sin(x) + 1$:

Then take the square root of both sides:

There are some details to think about here, and these are connected with the side question of whether the absolute values around $y$ are really necessary. As the Comments below the Question have already started to sketch out, because the initial value $y(0) = 1$ is positive, it is conceivable that $y(x)$ will stay positive. If it does the absolute value of $y$ is just $y$, and the "modulus operator" is indeed unnecessary. A more rigorous, but still elementary treatment can be built, but this would take us on a detour from the present narrative.

I've done such an experiment, and it seems that when $\sin(x) \ge 0$ the iterations converge reliably. However for $\sin(x)$ sufficiently negative the term under the square roots becomes negative after a few iterations, which of course makes the iterations undefined.

For example, with $x = -1$ (or any argument differing by an integer multiple of $2\pi$, the iteration breaks down after about half a dozen steps. With $x = -1.5$ the iteration breaks down more quickly, after a couple of steps. This problem is mitigated by using more "accurate" starting guesses than the simple $y_0 = 1$, but it seems that this simple method is not reliably converging when $C = \sin(x) + 1$ is close to zero.

After thinking more carefully about this equation, I see that in the region where $C = \sin(x) + 1$ is small (positive), the term $\ln y$ is changing more rapidly than the term $y^2$. Hence I'm going to try the iteration "the other way around":

Using the alternative function iteration isn't particularly successful except very near $C=0$, although better starting guesses $y_0$ are an improvement when $0\le C \lt 0.7$ than the earlier $y_0 = 1$. The following graph (made with online graphing calculator Desmos) shows how the function $f(y) = \ln |y| + y^2$ behaves over the range $C\in [0,2]$: 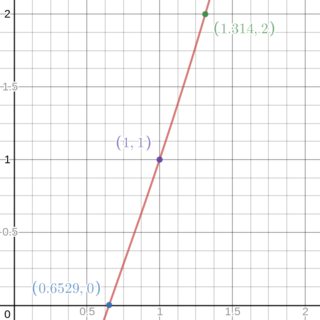 With this insight I can see how the fixed point iteration can be improved, albeit the smoothness of this curve makes it clear to trained eyes that bisection, regula falsi, or even Newton's method would be well-behaved for the purpose of inverting this function.

Beside strict numerical methods, you can make good approximations builiding the Talor expansions around the extrema.

For sure, adding one more term in each expansion would give almost the exact results.