Does every finite graded poset appear as a graded induced subposet of the power-set poset?

A poset equipped with a rank function is called a graded poset. An example of a graded graded poset is the power set poset $\mc P(S)$ for any finite set $S$. The poset relation is given by inclusion and the rank of any element is the cardinality of that element. When $S$ is infinite, we write $\mc P_f(S)$ to denote the set of all the finite subsets of $S$. Clearly $\mc P_f(S)$ is also a graded poset with rank being cardinality.

Question. Is is true that for every finite graded poset $P$ there is an induced graded embedding of $P$ into $\mc P_f(\N)$.

In other words, does every finite graded poset appear as a `graded induced subposet' of a large enough power set poset?

I think the answer to the above question is in the affirmative. I have supplied a proof below. I am not looking for a proof verification and only want to know if the statement is correct. In case the statement is indeed correct, if possible can you also provide a refernce? Thank you.

Apoligize If I have missed a point, it feels like I might have read it too fast, but here are my 2 cents.

A note on your proof : it seems to me that in the lemma 1 you assume the existence of an induced graded embedding $f:P\to\mathcal{P}_f(\mathbb{N})$, and then in lemma 2 you use lemma 1 to prove its existence. Isn't it redundant?

Regarding the original question. My guess would be no. My main reason for that is Birkhoff's representation theorem.

Meaning that you need additional requirement on your poset $P$ for the result to hold :

Then for these posets the results hold by Birkhoff theorem.

If you build a poset that is not a lattice, for example including two elements $x,y$, for which the $\sup$ is not well-defined, i.e. having the same two immediate cover $z_1$ and $z_2$, 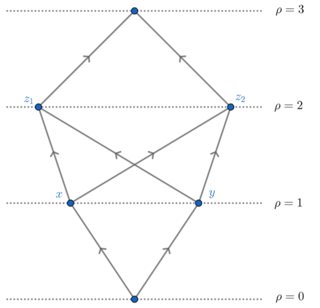 Then I don't think you can find an induced embedding into $\mathcal{P}(\mathbb{N})$.

Not the answer you're looking for? Browse other questions tagged combinatorics reference-request order-theory or ask your own question.

1
Graded poset of Isotones
3
Categorial description of the subposet of $\prod_{i \in I}P_i$ of all $x \in \prod_{i \in I}P_i$ with $\{i \in I \mid x_i = \bot_{P_i}\}$ cofinite
1
Order-preserving maps on a directed-complete poset
0
$\#(A)\nleqslant \#(B)\Rightarrow \#(A)\geq \#(B)$
0
posets, ordinal product and set of order preserving maths
5
Is there a name for this type of poset?
3
What posets admit a strictly increasing real-valued function?
2
Does a graded poset on $\mathbb{N}_{>0}$ generated from subtracting factors define a lattice?
1
Is every finite connected set equipped with a binary relation of the form Aut(X)\X?