Let $(X,d)$ be a metric space such that, if $Y \subset X$ is closed, then every contraction mapping on $Y$ has a fixed point. Show that $X$ is complete.

This problem appeared in an exam and I attempted a solution, but admittedly was not able to get very far. I started by letting $X$ not be complete and considering a Cauchy sequence in $X$, $\lbrace y_n \rbrace \rightarrow y, y \notin X$. Then, maybe we could construct a contraction mapping which would have fixed point as $y$, i.e $f(y)=y$, and arrive at a contradiction that way.

Now, we an always replace $(x_n)$ by a subsequence of itself. So WLOG, we can assume the elements of $x_n$ are all distinct, since we can always throw away duplicates. After that, lets replace it with this special subsequence $(y_n)$, which I will describe later. This special subsequence will be chosen so that the map $f(y_n) = y_{n+1}$ is a contraction map. Then by hypothesis, $f$ must have a fixed point, and it can't be any of the $y_n$ (because then $y_{n+1} = f(y_n) = y_n$ contradicts the distinctness of the sequence). Thus, $(y_n)$ has no fixed point, which contradicts the hypothesis. 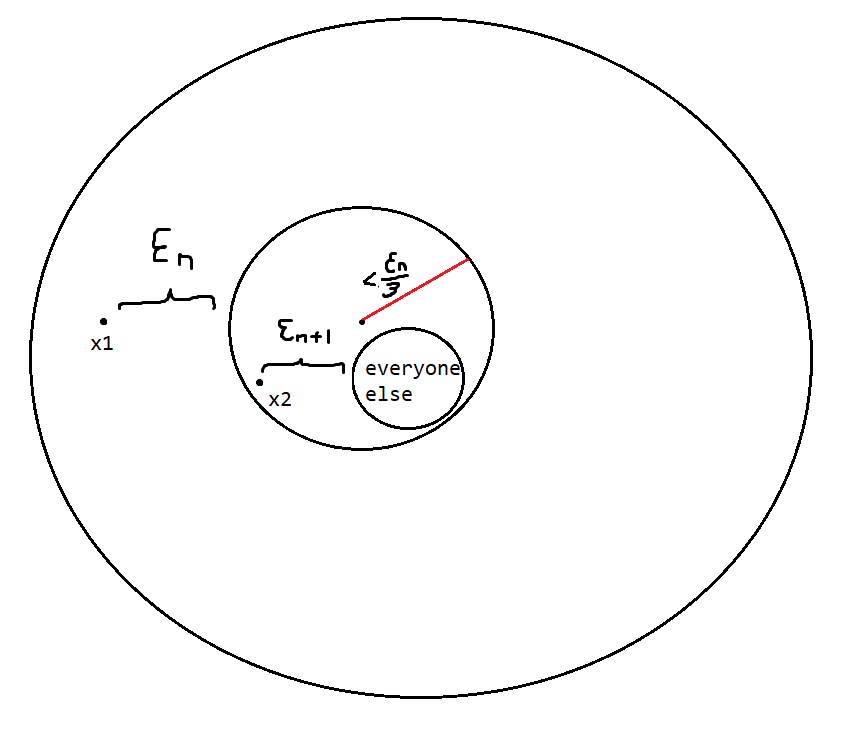 Not the answer you're looking for? Browse other questions tagged metric-spaces complete-spaces or ask your own question.

3
Finding the fixed points of a contraction
7
Opposite of a contraction mapping
3
Existence of fixed point
1
Subset of metric space closed if and only if relative metric space complete
1
Infinite number of terms of a Cauchy sequence in a union of disjoint closed sets
3
Set of Cauchy sequences is closed (Proof verification)
0
A property that implies completeness in metric spaces
1
Is $C([0,T] ; L^1(\mathbb{R}^{N}) \cap L^{\infty}(\mathbb{R}^{N}))$ a Complete Metric Space? (For Using Banach Fixed Point Theorem)