How to show that there exist no four circles as in the picture?

These are distinct (their radii might differ or not) semicircles on the $x-axis$ as depicted below. I want to show that there exist no such four Euclidean semicircles such that the intersections occurs at a right angle as in the figure. How can show that algebraically?

Using the [Poincaré half-plane model] (http://pi.math.cornell.edu/~mec/Winter2009/Mihai/section6.html), the upper part of the figure displays an "ordinary" quadrilateral whose sum of angles is $2 \pi$ which is impossible (this sum of angles being twice the sum of angles of a triangle, itself less than $\pi$ as is well known for hyperbolic geometry).

Let us give indices $k=1...4$ to the circles from left to right in the order of their leftmost point, with resp. equations:

Let us recall that a necessary (and in fact sufficient) condition for circles with equations:

The four orthogonality conditions give rise to the following system:

Replacing now $a_3$ by $a_2$ into relationship (B), and comparing with (A), we get $c_2=c_3$ which would mean that the 2nd and 3rd circle, having $a_2=a_3$ and $c_2=c_3$, would have the same equation, therefore would be identical, contradicting the fact that all the circles are assumed distinct.

[Following the suggestion of Alan Abraham] Let us consider the pencil of circles $\lambda C_1+(1-\lambda) C_4$ of circles generated by the two leftmost and rightmost circles ; the generic circle of this pencil has equation: 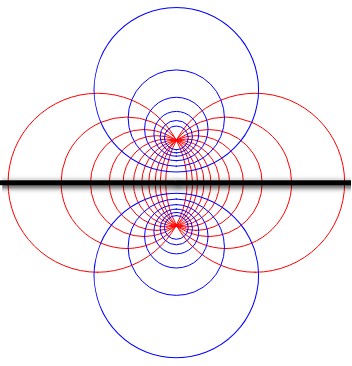 The set of circles orthogonal to $C_1$ and $C_4$ is a certain set of circles (in blue on figure above) with their centers on line $AA'$ and the property that any point on $AA'$ is the center of a well determined blue circle ; as we are looking for a center on the $x$ axis, there is only one such circle. Let it be circle $C_2$. In this case, there is no place for a circle $C_3$ different from $C_2$ with its center on the $x$ axis...

Let's simplify the problem by an inversion. Specifically, let's invert about a right-angle intersection between one of the two semicircles.

Those two semicircles (or rather the circles they represent) becomes a pair of perpendicular lines; without loss of generality, they're the $x$-axis and the $y$-axis.

The line in your diagram becomes a circle perpendicular to both axes, which means its center must be at the origin; without loss of generality, it's the unit circle.

For the remaining two semicircles (or rather the circles they represent):

6
Find the axis and angle of a sphere rotation.
0
Intersection of circles toward the left of the blue line
1
How to show that the angle at intersections of concentric ellipses with a radial line is constant?
3
Congruent triangles in 3 tangent circle configuration
1
Four Orthogonal Circles on a Sphere
0
How we calculate the intersection of two circles based on the tangents and straight line through their midpoints?