How do I know if a given set of points on a convex quadrilateral are valid tangent points for an ellipse fitting inside that quadrilateral?

I am curious about this because when using linear perspective to plot ellipses in my drawings I first make quadrilaterals, then deduce the tangent points, then plot the ellipse. It would be nice to have some way of checking those tangent points to make sure they are valid.

Take for example the image below, given points E,F,G, & H on the convex quadrilateral ABCD I don't see a way to construct an ellipse that is tangent to all those points. Is there a formulaic/algorithmic way of knowing if a given set of points can/cannot construct an ellipse on a given quadrilateral without trial and error (In an app like GeoGebra)? 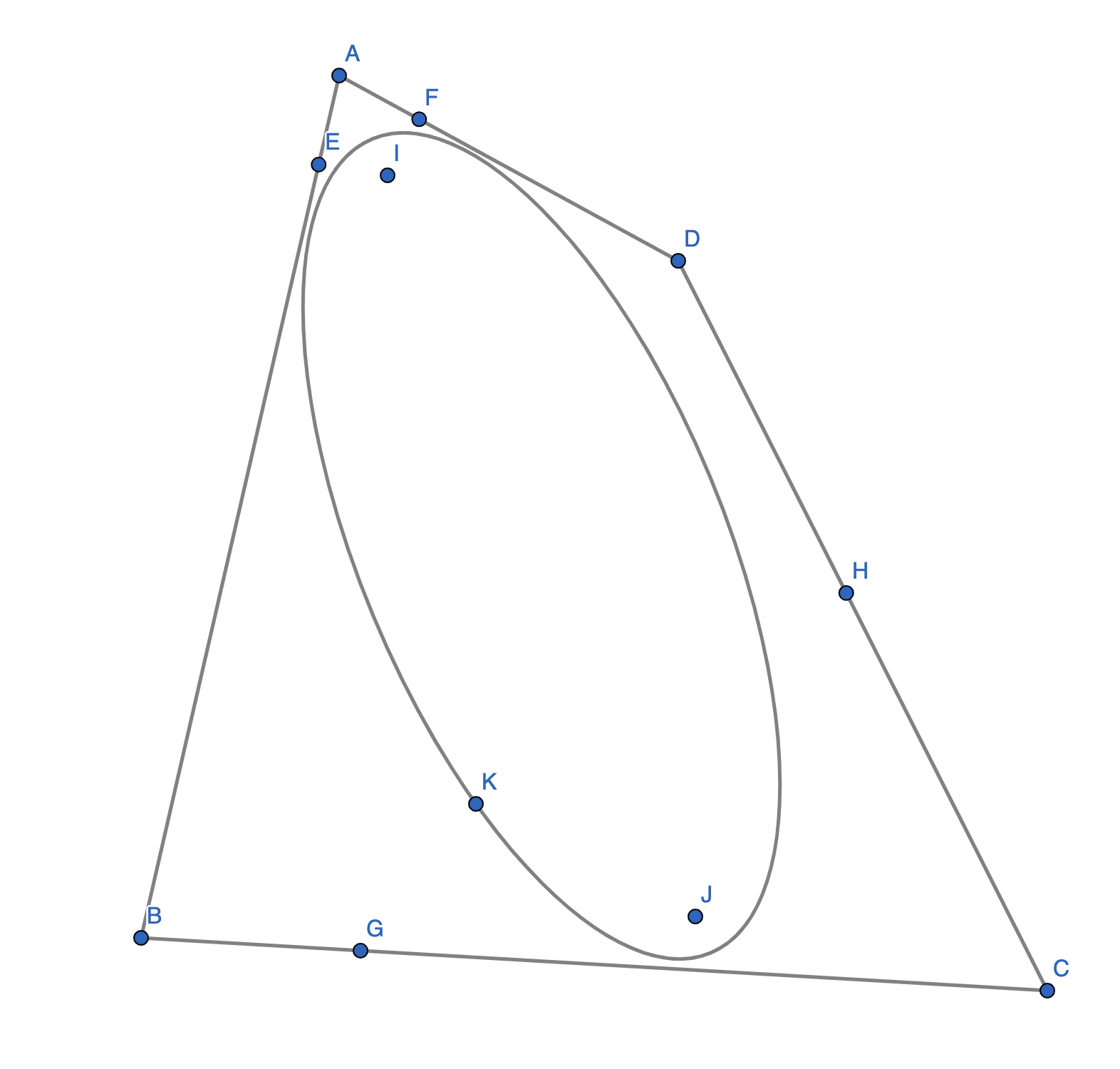 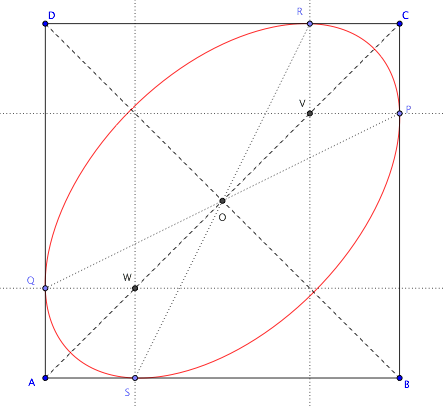 As perspective transformations preserve collinearity of points, these properties of tangency points can be reinterpreted for the case of an ellipse inscribed into a generic convex quadrilateral (see figure below).

Lines $CD$, $AB$, $PV$ are now concurring, and the same happens for lines $BC$, $AD$, $RV$. Points $POQ$ are aligned, as well as $ROS$. It follows that once we fix a tangency point, the other ones are uniquely determined by these properties. 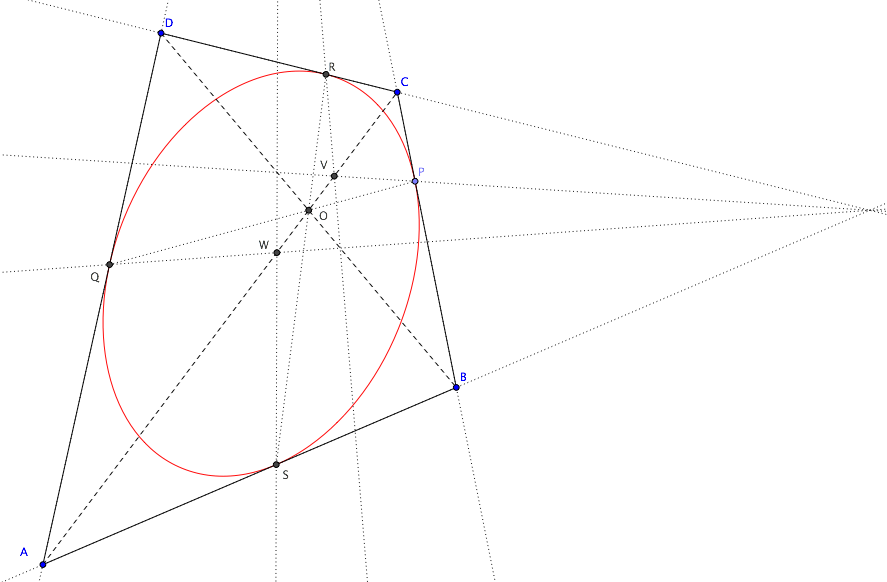 Let the four sides of $S$ be denoted $S_R, S_L,S_T, S_B$, with subscript standing for right, left, top, bottom. Let's assume that $S_B$ is the $x$-axis; this will be notationally convenient later.

An algorithm to decide this equation (and produce the ellipse if it exists) is sketched below. The moral of the story is that it is a linear algebra problem.

If we assume $f \not = 0$, we can normalize it to $1$. (You can avoid this annoying case analysis with projective coordinates.) Let's assume we are in this case, and I'll leave the other case to you, so the equation is:

Note that there are 5 variables here, so we have a five dimensional vector space with coordinates $(a,b,c,d,e)$.

We get four such equations. The set of solutions to them will be a line(see footnote (*) ), which you can compute with linear algebra.

One way to proceed from here is to use the fact that this quadratic is tangent to the $x$-axis iff the quadratic $q$ has a double root, which happens iff the discriminant vanishes, i.e. $d^2 - 4a = 0$. However, this is wasteful, since we have additional information; in particular, we know that $q(x)$ must touch tangentially at the particular point $p_B$. In particular, we want the derivative of $q$ to vanish at $x_B$.

This gives us five equations in general, cutting us down to a single conic, which might be your desired ellipse. To see whether corresponds to your ellipse, you can:

If the conic passes these tests, it is a solution to your problem. Otherwise, there is no solution with specification the given $p_i$.

I think these tests are likely to be redundant. In particular, I think an ellipse tangent to the four intervals must lie inside it, so you can probably eliminate the third condition.

If this is correct, then each time you add one of these conditions you necessarily eliminate some conics, meaning that the dimension of the space drops when you impose the new constraint.

A more algebraic and believable argument would be to explicitly construct equations a sequence of conics achieving each of these intermediate conditions.

Remark I believe the following is true: For each $x \in S_B$ there is a unique ellipse tangentially inscribed in $S$ that contains $x$, provided $x$ is not at a corner. So, there is actually an interval of ellipses satisfying you constraints. I'm not sure about this though. I think that via projective duality the above argument would give uniqueness. I convinced myself of existence through a half backed argument about inflating an ellipse passing through $x$ and the antipode of $x$ around the midpoint of the square, but I'm not sure if it can be easily formalized.

2
What algorithm can I use to find this ellipse inscribed in a quadrilateral?
1
Is the line created by the minor axis of an ellipse concurrent to the lines running to the opposite vanishing point?