I was in a lecture in college and my lecturer mentioned the practical reason why the derivative of $ \sin(kx) = k\cos(kx) $. Although I didn't quite understand the reason totally.

Would anyone be able to explain why this derivative is so in practical terms and or logical terms, not with a mathematical proof (i.e. using the chain rule)? I was wondering if you could think of it in terms of the graphs of each of the functions?

I don't really know the reason, therefore any insight/help will be greatly appreciated.

Consider the graph of a function $f(x)$. If we multiply the argument of the function (the "$x$", in this case), we squash the function horizontally. For example, if we take $f(2x)$, it's as if we smooshed together the graph into half the horizontal space. You might want to test this in a graphical calculator such as desmos.com to test this for yourself.

If we smoosh it together by a factor of $k$, the slope will increase by a factor $k$ as well.

Start with the graph $y = \sin x$. How is that related to the graph of $y=\sin(kx)$? In the graph of $y = \sin(kx)$, vertical dimensions remain the same, but horizontally everything is shrunk by a factor $1/k$. That means all the slopes are multiplied by a factor of $k$. 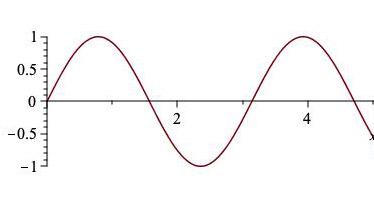 Not exactly an answer, but perhaps some intuition can be derived from this...

If you increase $|k|$ (the sign determines the direction around the circle) you can imagine that the velocity increases. It is not to hard to believe that the velocity is proportional to $k$ (I am allowing for sign of $k$ here, the point could move in either direction).

If you accept this, we just need to determine the direction.

Not the answer you're looking for? Browse other questions tagged derivatives trigonometry or ask your own question.

7
Derivative of an even function is odd and vice versa
3
Find the derivative of $\frac{(2x−1)e^{−2x}}{(1−x)^2}$
6
Neural Network - Why use Derivative
0
How to find the mixed derivative of the Gaussian copula?
1
How is the chain method used in finding this derivative?
0
If $t$ and $y$ are functions of $x$, and $\frac{dy}{dx}=e^{-t}\frac{dy}{dt}$, why is the second derivative found as follows?
0
Can you always proof derivatives on your own?
2
Basic proof that $\frac{d}{dx}(\sin(nx))=n\cos(nx)$
0
Why does an anti-derivative “preserve” a translation from the function being integrated?
2
What's the problem with differentiating $y = \sin(x^2)$ by applying the limit definition of a derivative directly?