Does sequent calculus have axiom?

I heard that sequent calculus doesn't have axioms, is that true?

p69 in §6. Summary and Example in IV. A Sequent Calculus in Ebbinghaus' Mathematical Logic, summarize the inference rules in sequent calculus (is it called natural deduction outside the book?) for the first order language. Is there any axiom? 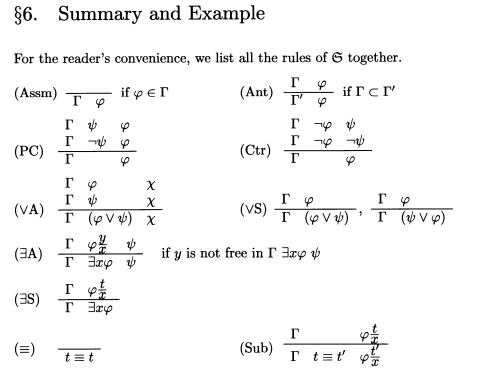 (Not too) Short answer. Yes, the rules $(Assm)$ and $(\equiv)$ are axioms. By axiom here (and in many textbooks such as Takeuti's Proof Theory cited by MauroALLEGRANZA) is intended an inference rule with no premises. In this sense, every proof system needs at least an axiom rule, otherwise there is no possibility to build a derivation: without any axiom, from what can we start a derivation on the top of the tree? Said differently, this is the only way to avoid infinite regress.

We need $(Assm)$ even in a purely logic language without the identity symbol $\equiv$. Of course, when you extend the language with other symbols, inevitably you need other axioms to deal with that symbol and to give it a meaning. For instance, the axiom $(\equiv)$ expresses the reflexivity of the identity.

When you hear that the sequent calculus does not have any axiom, it is intended that no axiom is needed other than the minimal one $(Assm)$, at least in a purely language without the identity symbol $\equiv$. This is the main difference with other proof calculi such as Hilbert system, where there are many axioms even for a purely logical language without the identity symbol.

A "pure" sequent calculus is a proof system that manipulates sequents (i.e. finite sequences or multisets of formulas) or pairs of sequents and it is characterized by the fact that there are no elimination rules (a connective or quantifier cannot disappear moving from a premise to the conclusion of an inference rule) except the cut rule, which however is admissible, i.e. "superfluous" (everything derivable in the sequent calculus can be derived without using the cut rule). A standard presentation of the sequent calculus is given on Wikipedia page (see the system LK).

Why does Ebbinghaus' calculus not completely fit it this framework? Because of the rules $(PC)$ and $(Ctr)$, which are elimination rules (a formula in the premises disappears in the conclusion) and are not "superfluous": if you rule them out of the system, then you cannot prove all the valid formulas in classical logic.

Anyway, coming back to your main question, it does not change anything: the axiom $(Assm)$ is needed in both "pure" sequent calculus and Ebbinghaus' calculus.

Second digression: Are there axioms in natural deduction? Yes, $(Assm)$ is required also in natural deduction and, as in the sequent calculus, it is the only axiom required, at least in a pure logical language without the identity symbol. In this respect, my point of view is different from MauroALLEGRANZA's one. There are many different but equivalent presentations of natural deduction (the one manipulating formulas in tree-like derivations, the one manipulating sequents, Fitch-style system), in some of them the presence of $(Assm)$ is somewhat hidden, but it is still there.

In the presentation of natural deduction that manipulates formulas in tree-like derivations (see here for a gentle introduction), there is a special rule as the starting point for building proofs. It is called the assumption rule, and it looks like this, for any formula $\varphi$:

What it means is that at any point we are free to simply assume any formula, $\varphi$. The single formula $\varphi$ constitutes a one-line proof, and the way to read this proof is as follows: assuming $\varphi$, we have proved $\varphi$.

This is exactly the same meaning as the rule $(Assm)$ in the sequent calculus. Indeed, the assumption rule $(1)$ in natural deduction can be seen as an axiom, in the sense of an inference rule without premises. This is evident in the sequent-like presentation of natural deduction (see here and here for an informal explanation of this presentation), where the assumption rule $(1)$ becomes exactly the rule $(Assm)$ (Ebbbinghaus' sequent $\Gamma \ \varphi$ is more commonly denoted by $\Gamma \vdash \varphi$).

As in the sequent calculus, you can hear that natural deduction does not have any axiom, but it should be intended that no axiom is needed other than the minimal one $(Assm)$, at least in a purely language without the identity symbol $\equiv$.

Not the answer you're looking for? Browse other questions tagged logic computer-science proof-theory natural-deduction sequent-calculus or ask your own question.

3
proof in sequent calculus LK
8
Understanding properties and criticisms of a (specific) sequent calculus
8
Good textbook for learning Sequent Calculus
1
Unable to prove this simple inference using sequent calculus
2
Is this sequent rule unacceptable?
2
Under what conditions does an axiomatic proof system have a natural deduction equivalent?
3
What is the definition of “a derivation of a sequent ”?
2
Do inference rules mean the same in a Hilbert system and in a natural deductive system?