This is a follow up on a related question about planar graphs in general. In this question we wish to consider only maximal planar graphs (triangulations). It is known that

The question is whether there are other kinds of triangulations in which the coloring of two non adjacent vertices is forced to be the same, as in the above two examples. Is this known or not?

This was essentially answered in your first question, it was only obscured because the example I gave happened to be uniquely colorable. But here's a way to construct lots of other examples.

Start with a triangulation in which all degrees are even. (For example, let's start with the octahedral graph.)

Draw a line between two non-adjacent vertices and add a vertex wherever this line crosses an existing edge. This (always!) gives us a triangulation in which exactly two vertices are odd: 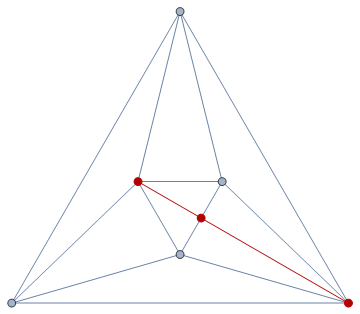 Those vertices, as we know, must have the same color in any $4$-coloring. However, usually such a triangulation will not be uniquely $4$-colorable, and in fact that's not true here.

Finally, just add a new vertex adjacent to the three corners of some face (any face): 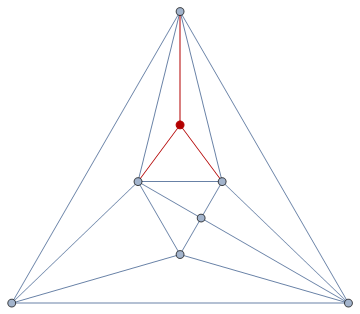 There are now more than two odd vertices (no matter which face we picked). However, any $4$-coloring of this graph induces a $4$-coloring of the graph at the previous step, and vice versa (the color of the new vertex is uniquely determined). Therefore:

1
5 critical graphs which are planar plus an edge

1
Are there triangulations of the sphere (see below) for which every vertex four-coloring consists of a single Kempe chain for each color-pair?
3
Unique four-colorings of planar graphs and the like…
0
Edge-coloring version of four color theorem
1
Counting two-colored graphs with labeled vertices
1
Show that there are $3$ vertices of the same color forming an isosceles triangle.
1
Four colored planar graphs with two vertices which must be colored the same
1
5 critical graphs which are planar plus an edge
1
Coloring 4-connected triangulations with 4 odd vertices
1
How to come up with an example of a triangulation with two adjacent vertices of odd degree?