This is very much an applied maths question. I'm having trouble with Euler angles in the context of smartphone apps. I've been working with Android, but I would guess that the same problem arises whatever operating system one uses.

In the context of it's 3D sensors, the Android operating system is set up to calculate a rotation matrix $\mathbf{R}$ which is defined by 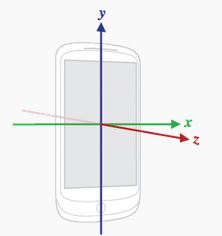 Once $\mathbf{R}$ has been calculated, the Android operating system will then calculate for you the Euler angles $\phi$, $\theta$ and $\psi$ where

The azimuth $\phi$ is a particularly important result, because $\phi=0$ corresponds to the direction of north. However, there is a well known problem with these Euler angles, which is known as Gimbal lock. When $\theta=\pm\frac{\pi}{2}$ the co-ordinate system is denerate in the sense that the combination $\phi\pm\psi$ is defined, but the individual quantities $\phi$ and $\psi$ are not defined.

In the context of smartphone apps, this means that determining the direction of north is tricky when the device isn't lying flat on a table. The closer the device gets to being upright, the less reliable to co-ordinate system becomes. On stackoverflow.com some people recommend switching axes when $\theta$ moves away from $0$ so as to avoid Gimbal lock, but I find that that solution introduces other problems, such as jumps in $\phi$, $\theta$ and $\psi$ when the coordinate system is switched.

So my question is, instead of $\phi$, $\theta$ and $\psi$ as defined above, is there a better way of defining an angular co-ordinate system for expressing the orientation of a smartfone relative to the vectors $\mathbf{E}$, $\mathbf{N}$ and $\mathbf{G}$? In particular, is there a coordinate system that's better for defining the direction of north, that will work whether the device is upright or lying flat on a table.

Clarification Whatever the best methodology is, one result must be some kind of azimuth angle which can be explicitly calculated from the rotation matrix $R$, which represents the angle through which the device must be rotated so that it's pointing north.

Posting the question yesterday has focussed my thoughts on this problem, and I think that I've now come up an answer. In terms of the rotation matrix $\mathbf{R}$ that I defined in the question, I think that the best definition of the azimuth $\phi$ (i.e. the angle through which the phone must be rotated so that it's pointing north) is given by

I give a full explanation below, but one of my main concerns is to address what people expect when using a smartphone. If a smartphone is lying flat on a table and there's a compass arrow pointing north in the direction of the longest edge of the phone as shown in the following image 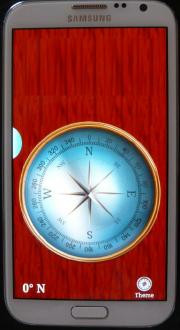 then if the phone is rotated from its flat horizontal position into a vertical position by rotating along the short edge of the phone, the compass directions and hence the azimuth $\phi$ shouldn't change. Of course, with the phone upright the arrow that was pointing North when the phone was flat is now actually pointing away from the earth and straight into space, but people interpret that upward pointing arrow as pointing straight ahead in a horizontal direction. I've tested the above formula for $\phi$ in my android devices and as far as I can tell it works well. (NB: I've posted the relevant piece of the code that I'm using here on stackoverflow.com.)

The $\theta=\pi$ degeneracy occurs when the device is lying face down on the table, when $E_x+N_y=E_y-N_x=0$, and this is a more interesting case. In this situation, $\phi$ is undefined, although $\phi+2\psi$ is defined. The purpose of this $\left(\phi,\theta,\psi\right) $ co-ordinate system is to capture the idea that people expect the compass direction (i.e. the azimuth $\phi$) to be unchanged when rotating a phone from a horizontal $\theta=0$ position to a vertical $\theta=\frac{\pi}{2}$ position. However, if the rotation continues and $\theta$ increases beyond $\frac{\pi}{2}$, then as the phone approaches the horizontal $\theta=\pi$ upside down position, a compass arrow that had been pointing north when the device was horizontal will now be pointing south if it's direction remains fixed on the smartphone display. So as the $\theta=\pi$ degeneracy is approached, the smartphone is no longer behaving in an appropriate way. One way of dealing with this would be to switch co-ordinate systems at some point between $\frac{\pi}{2}$ and $\pi$ which could alter the direction of the arrow by $\pi$ and make the smartphone behave in an appropriate way again. However, it is worth noting that almost all the time when people are using their phones $\left\vert \theta\right\vert\le\frac{\pi}{2}$, so the inappropriate behaviour near $\theta=\pi$ when the phone is upside down should not be a problem in practice.

I've searched the internet and had a look at the article Shuster, M., "A Survey of attitude representations", Journal of the Astronautical Sciences 41(4):1993 that was suggested in another answer, but I haven't been able to find any references to the $\left( \phi,\theta,\psi\right) $ co-ordinate system defined here. In such a mature area as 3D rotations, it seems unlikely that no one has defined rotations in this way before? However, the emergence of smartphones has provided a new application for rotation matrices, so perhaps there haven't previously been applications where this type of co-ordinate system has been appropriate?

Thinking of the vectors being embedded within the rotation matrix is probably not the best way of looking at at. Instead, think of the following:

There are multiple other represenations of attitude, most of which are either rarely used in practice, or are of theoretical value only. A good overview is provided in a paper by Shuster, M., "A Survey of attitude representations", Journal of the Astronautical Sciences 41(4):1993, but is rather heavy reading :)

Hence, this answers your direct question of is there a coordinate system that's better for defining the direction of north, that will work whether the device is upright or lying flat on a table, but I suspect there will be further parts to the question.

We start with a reference orientation: $X = E, Y = N, Z = G$. A rotation operator $\underline R$ maps $X \to X'$ and so on--this represents a rotation of the device while $E, N, G$ remain fixed. To me, this is a sensible interpretation.

One of the big points about rotations in 3d space is that a composition of rotations is itself a rotation. Every rotation has a unique plane, and that information is stored in the 3d rotor.

The geometric product is also associative.

Now then, let's consider the following case: the device starts in standard position $X = E$, etc. and is rotated in the $NG$ plane by $\pi/2$, and then in the $EN$ plane by $\pi /2$. We want to find the angle $Y$ makes with $N$--and $Y$ (after these rotations) in general. The answer should be obvious, thanks to our choice of angles. First $Y$ goes to $G$, and it stays there after the second rotation. Let's work it, however, with the formalism of rotors.

Rotors in 3d take the following basic form: if $A$ and $B$ are orthonormal vectors in the plane of rotation, and the direction of the rotation would rotate $A$ toward $B$, then a rotation in the plane $AB$ by $\phi$ has the rotor $R$:

Let's compute our rotors for the sequence described. First we have a rotation by $\pi/2$ in the $NG$ plane:

Similarly, for the subsequent rotation in the $EN$ plane, we have

The convenience of rotors is that we can multiply them to chain rotations, without having to multiply whole matrices.

You can, of course, instead decide to compute the rotation of $N$ to $\underline R(N)$ and then take the dot product, noting that this gets you the angle between $N$ and its image. That will be the shortest angle that will restore $N = Y$, but it will not in general restore the whole device to standard position. It is, however, quite easy to use $N$ and its image $\underline R(N)$ to generate a new rotor that rotates back to $Y = N$ in the shortest possible angle. That would require me to introduce the wedge product to you, though, as well as normalization of bivectors, which seems a little out of scope.

There are also some nitpicky details about your problem and what Android provides to you that will be of interest. For instance, you might have everything in terms of the $XYZ$ to begin with. That doesn't seriously change the method; you just have to reference everything in that basis, including your rotors and the rotations involved. Successive rotations about transformed axes require some care, but a general result is that there are equivalent rotations that use only fixed axes instead.

Edit: Oh, so all you really want is the projection of $N$ onto the $XY$ plane. Well, why didn't you just say so! This calculation gets a little tedious, so I used python's geometric algebra module.

Just throw away the $Z$ component, and you're done (you will have to renormalize to get a unit vector, but you can get the angle relative to $X$ in the usual way, using arctangent). One thing that could pose problems is that if the device has its long dimension pointing straight up, then $N = Z$, and there may be no projection at all. You may just not want to update the compass if there is a particularly large change or if you can recognize that the $X$ and $Y$ components of the resulting vector $N$ are too small. But as you noted, that's a pretty edge case for using a phone.

One solution would be to use quaternions.

Conversion to and from Euler angles can be found here.

Not the answer you're looking for? Browse other questions tagged geometry 3d rotations or ask your own question.