How to show that any polytope $P$ is spanned by the neighboring edges of any vertex $x$?

The question can also be phrased as:

See also example and images below.

I think Farkas' Lemma should lead to the answer somehow, but so far I've had no success in my proof attempts. 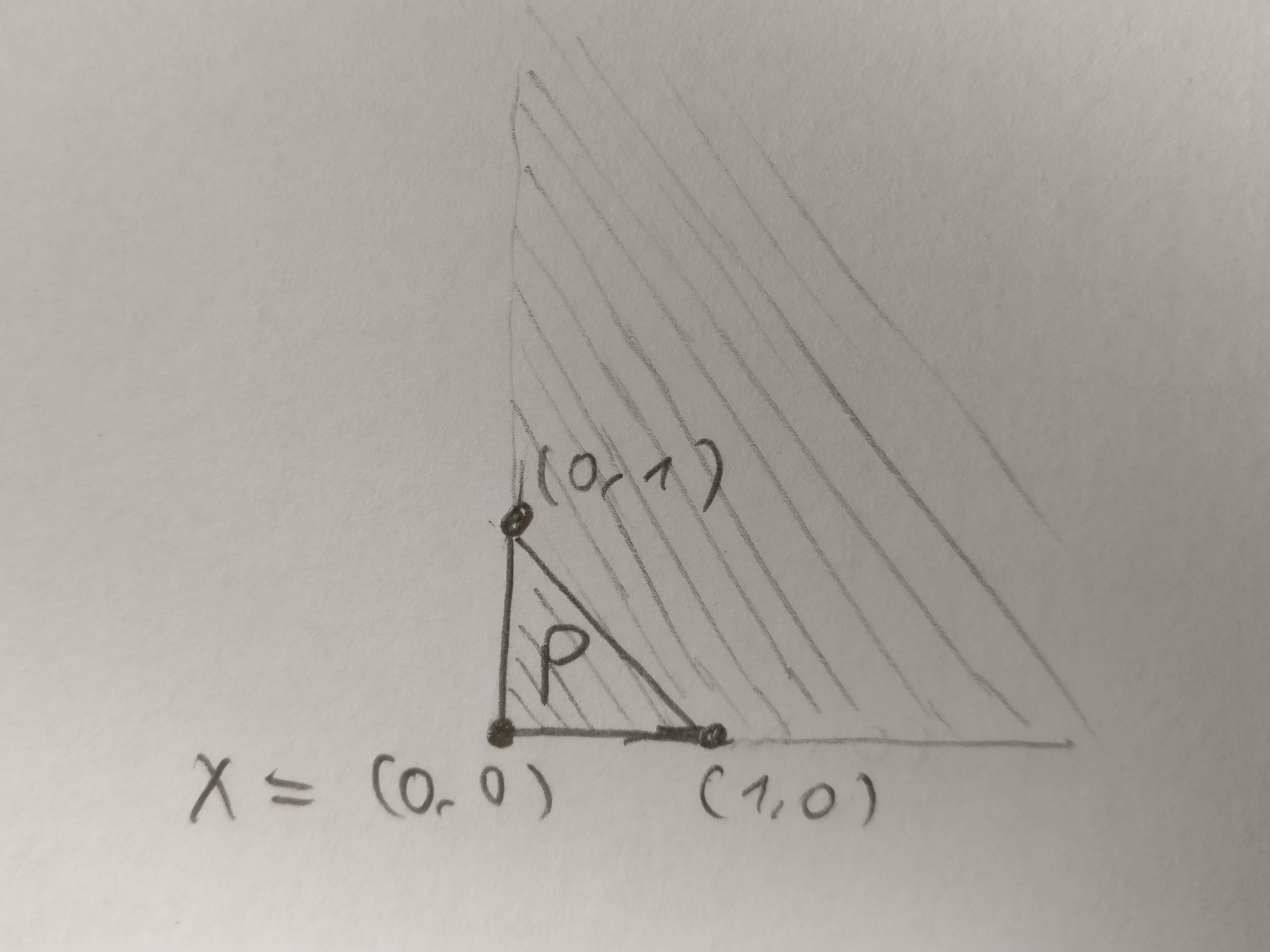 Here are two more images showing the idea for different polytopes: A polytope in $\mathbb R^2$: 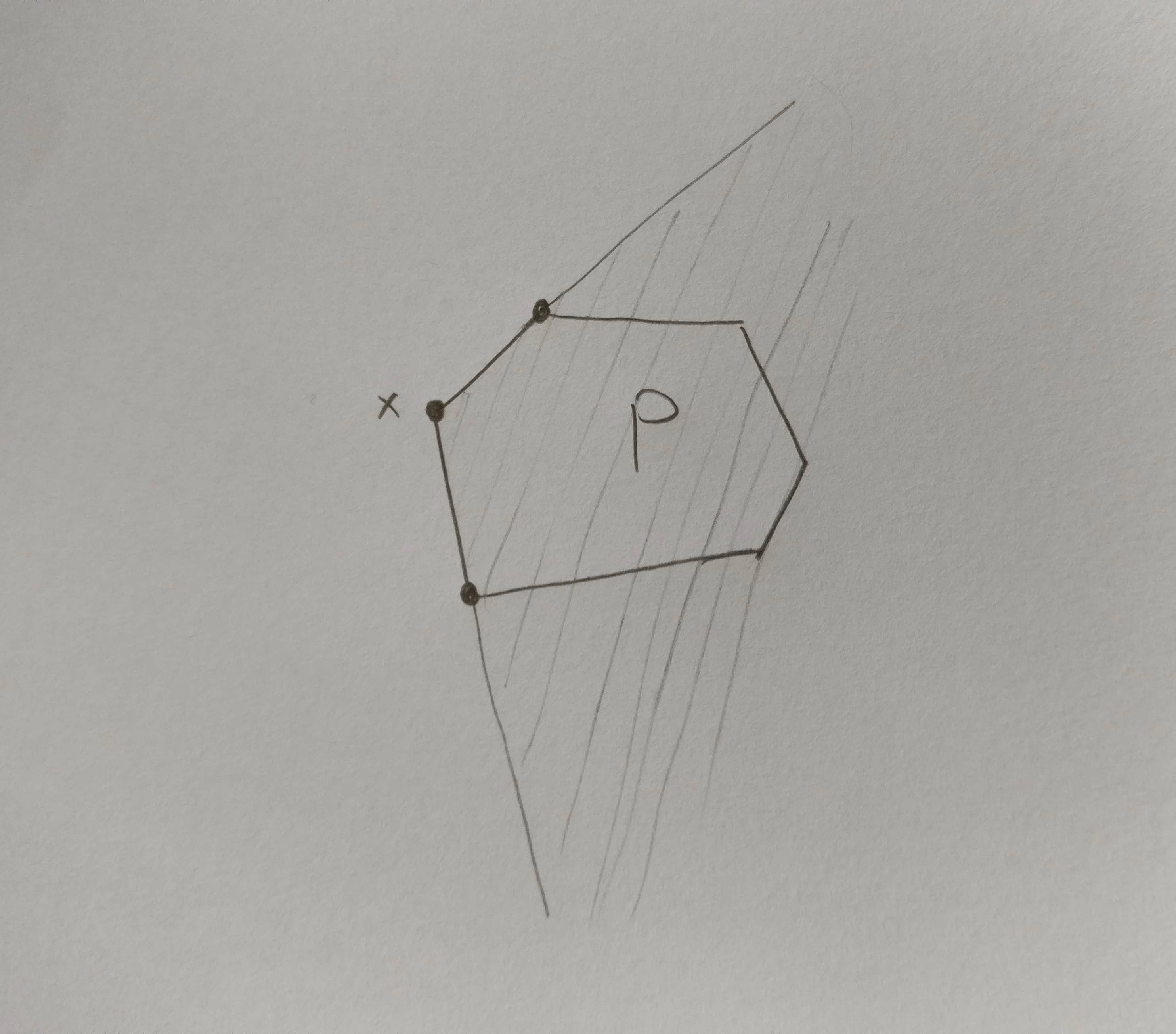 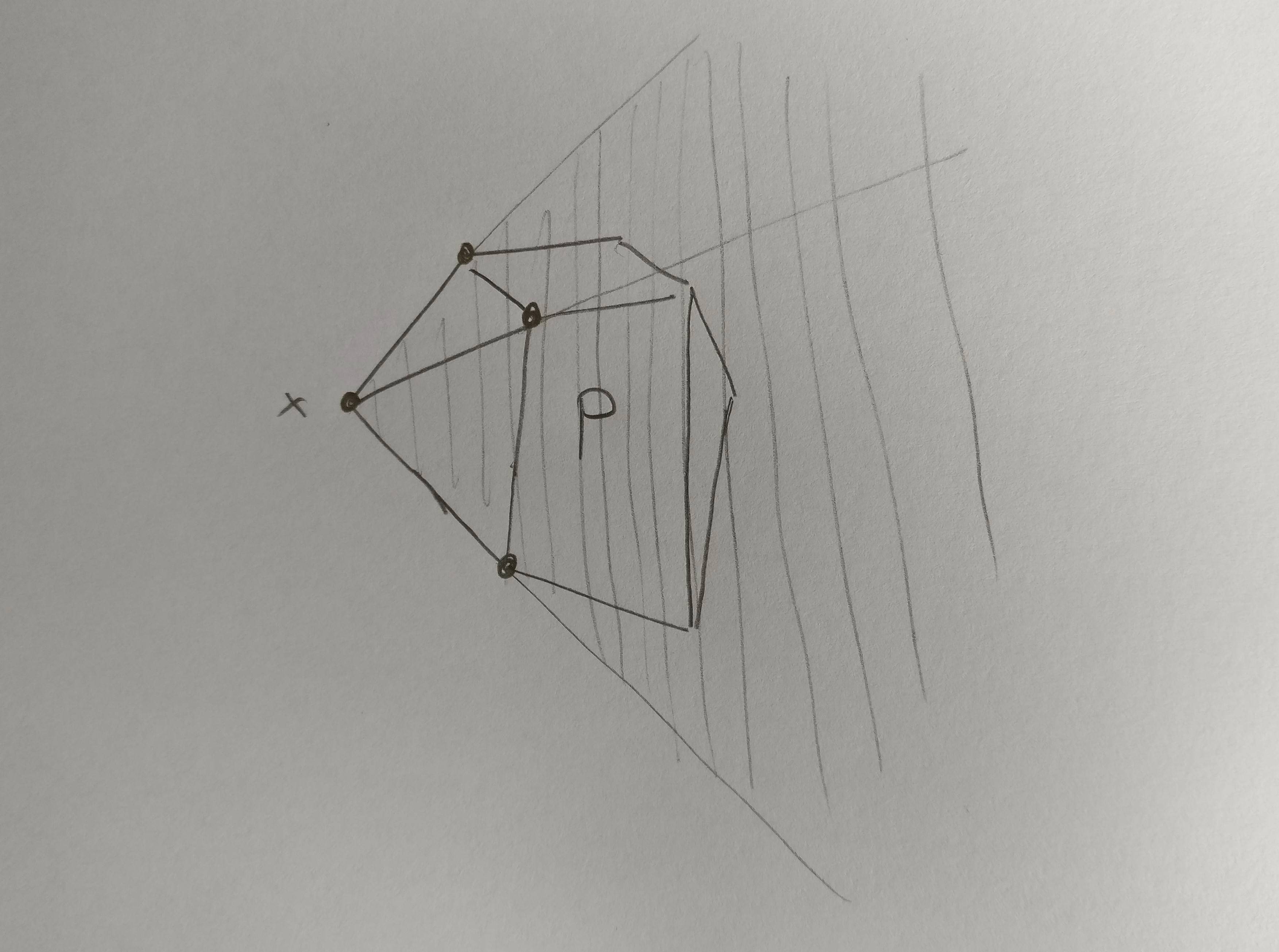 Farkas' Lemma is indeed the way to go, but we need the right setting. Below I give a sketch.

For simplicity, assume that we work at a vertex $x=0$ of $P$. So we want to find a minimal set of generators for the cone $\DeclareMathOperator{\cone}{cone}C:=\cone(P)=\cone (\mathcal V)$, where $\mathcal V\subseteq P$ is the set of vertices of $P$. What we want to understand is whether every such "minimal generator" $y\in\mathcal V$ is a neighbor of $x$, because if so, then the edge-directions indeed generate $C$. 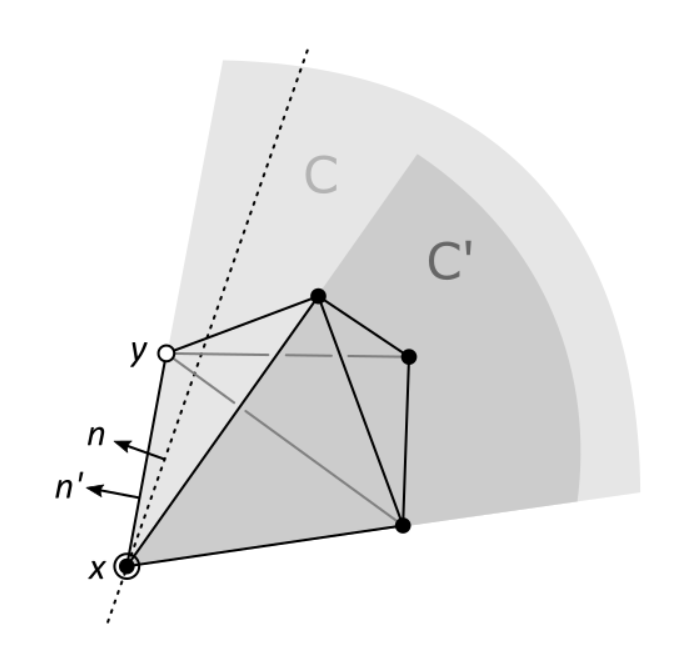 So, suppose that $y\in \mathcal V$ is part of such a minimal set of generators. Then $y\not\in C':=\cone(\mathcal V\setminus \{y\})$ (here you need to use that no three vertices of $P$ are colinear). By Farkas' Lemma, we can then separate $y$ from $C'$ via a hyperplane. In particular, we can choose this hyperplane with normal vector $n$ so that

It is not too hard to argue that we can choose $n$ linearly independent from $y$ (if we are working in dimension $d\ge 2$). Then

But, we can do a trick: before we start with any of our argument, we can tranform our polytope $P$ into an more convenient polytope $P'$, for which any two neighbors $y,z$ of $x=0$ satisfy $\<y,z\>>0$ (meaning $\sphericalangle(y,z)<90^\circ$). We can do this by stretching $P$ in a certain way. Hopefully, the following image makes this clearer:

Since this is a linear transformation, this changes nothing about the actual problem. But this time $(*)$ is trivially satified.

Overview. The heart of the proof is to show that if we cut the polytope very close to a vertex we obtain a tiny piramid. The other key observation is the fact that the thesis is local around the vertex: if we show that all points in P that are very close to zero belong to $E$, then for any $x$ and for sufficiently small $\varepsilon > 0$:

This implies that the hyperplanes $w_i^{\perp}$ meet at a point: around zero we have

and the dimension of a subspace can be checked around zero. Let me state the

Proof. Firstly, note that if we show $X$ to be bounded (property 3'), then it will satisfy property (3). Indeed, by the main theorem in polytope theory, it would be the convex hull of its extreme points. It is easy to see that extreme points are the intersection of some hyperplanes that are zero dimensional. Take such intersection. If it does not contain $u(=1)$ as a factor, then it is $\{0\}$, because $0 \in y_i^{\perp}$. If it contains $u(=1)$, the other factors must meet at a line, because intersecting with an hyperplane can decrease dimension only by one.

Not the answer you're looking for? Browse other questions tagged linear-algebra geometry discrete-mathematics linear-programming polytopes or ask your own question.

4
Prove that an edge of a polyhedron is a line segment
3
Why can't a vertex of a $d$-dimensional polytope be in fewer than $d$ edges?
0
Inner products of neighboring vertices on a convex polytope
6
Lower a polytope into the water $-$ are vertices at the water level connected to those at the bottom?
0
Convex hull of points