Recall that an elliptic curve over a field $k$ i.e a proper smooth connected curve of genus $1$ equipped with a distinguished $k$-rational point, i'll be really grateful for any help in understanding the following part of our course

(1) Why does $E$, the closure of the vanishing locus of the equation (4), define an irreducible algebraic curve?

(3) Given an affine and smooth Weirstrass equation, why does its shematic closure in $\mathbb{P}_k^2$ define an elliptic curve? It is stated that this is consequence of Bezout theorem but i failed to understand how 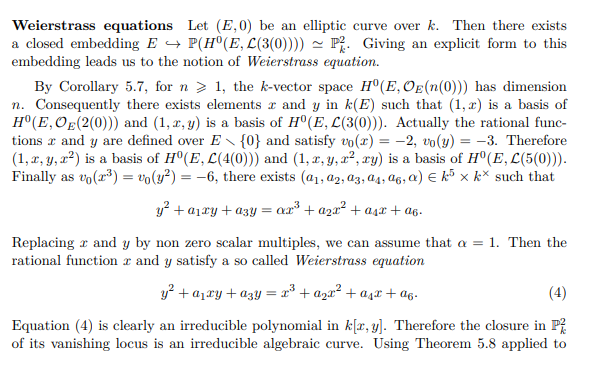 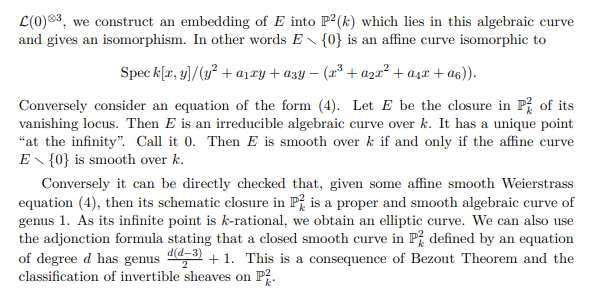 Several things before I answer.

a) You should really put more effort into these questions. Put them as four separate questions and show your thinking for all of them.

b) What course notes are these from? I'm just curious.

(1) As the note writer notes, $E$ is irreducible since

is irreducible. For simplicity let's assume the characteristic $k$ is different than $2$. To see this note that if we write

is a polynomial in $x$, which is clearly impossible considering that the argument of the square root is a monic odd-degree polynomial.

so then $E=V(F)\subseteq\mathbb{P}^2_k$. We then know from the Jacobian criterion that $E$ is smooth iff

EDIT: Oh, the note taker is claiming to that Bezout's formula as I said above follows from Bezout's theorem. I understand. My suggested method above calculates the arithmetic genus of $C$ (which is the same as the geometric genus by Serre duality). Namely, the adjunction formula says that

But, if $C$ is cut out be a degree $d$ curve then $\deg(C)=d$ and so applying Bezout's theorem to the above we get

where even though $x,y,1$ are only sections of a line bundle, they make sense since scalar multiplication doesn't affect points in $\mathbb{P}^2_k$ and thus it doesn't matter what chart you compute this on.

Not the answer you're looking for? Browse other questions tagged algebraic-geometry elliptic-curves schemes or ask your own question.