Fixed points of strong inversion of a knot

(2nd edit: added motivation for question at the end.)

Equivalently, a strong inversion on $K$ is a $π$-rotation of $S^3$ which leaves $K$ invariant and has axis meeting $K$ at exactly two points. 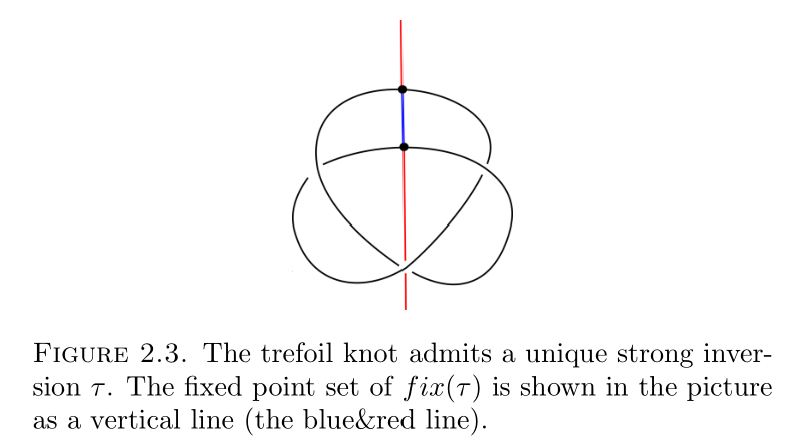 In the paper "Identifying tunnel number one knots" by Morimoto, Sakuma, and Yokota (https://projecteuclid.org/euclid.jmsj/1226498920), the authors state the following fact:

Corollary 1.3. Let $K$ be a knot with tunnel number one. Then $K$ admits a a strong inversion such that the set of constituent knots of $G(K,h)$ consists of two trivial knots and a knot with a 2-bridge decomposition.

The authors also mentioned that they use Corollary 1.3 to obtain the tunnel number of almost all knots with $\leq$ 10 crossings (they were missing two), all of which have tunnel number one or two. Many of the knots with $\leq$ 10 crossings have minimal crossing diagrams which make it difficult to explicitly find the fixed points of the strong inversion. I was thus wondering, how can one implement Corollary 1.3?

For alternating knots there is always a way to see a strong inversion from any alternating diagram as a sequence of flypes plus an elementary symmetry of the diagram, see https://arxiv.org/abs/2002.08191.

For non-alternating knots I don't know about any general visiblity results for strong inversions, although in practice they are also often visible on a minimal-crossing diagram by performing some flypes. In your example 11n92, you can see the strong inversion from your diagram by performing the $\alpha$ flype, then the $\beta$ flype, then $\pi$ rotation around the dotted black axis shown in the image below. In particular, the fixed points are the two intersection points of the black axis with the knot outside of the flypes. (The two intersection points inside the flypes are exchanged by the involution.)

Not the answer you're looking for? Browse other questions tagged geometric-topology symmetry knot-theory low-dimensional-topology knot-invariants or ask your own question.