I encountered this question in one competitive exam.i tried using the property of cyclic quadrilateral to get $$\arg\left(\frac{z^3-z^4}{z-z^4}\right)+\arg\left(\frac{z-z^2}{z^3-z^2}\right)=\pi$$ This can be simplfied furher but does not help.

Here is an alternative way to render $|z|=1$ -- by mathematical induction, of all things.

Thus the same circle contains all points with the form $z^n$ for all integers $n$, positive, negative and zero. But the circle has to be bounded and the set of powers just identified is bounded only for $|z|=1$.

Given $|z|=1$, how the argument is restricted is a matter of definition. If we require the points $z,z^2,z^3,z^4$ to be in rotational order in the quadrilateral, then we must have one of two cases:

But, arguably, the points still lie on the circle even if they are not in this rotational order, so the cyclic quadrilateral exists unless it is degenerated by pairs of vertices coinciding. Such a coincidence occurs only if $n\alpha$ is multiple of $2\pi$ for $n\in\{1,2,3\}$. So from this point of view $\alpha$ can be anything at all in $[0,2\pi]$ except $0,2\pi/3,\pi,4\pi/3,2\pi$. 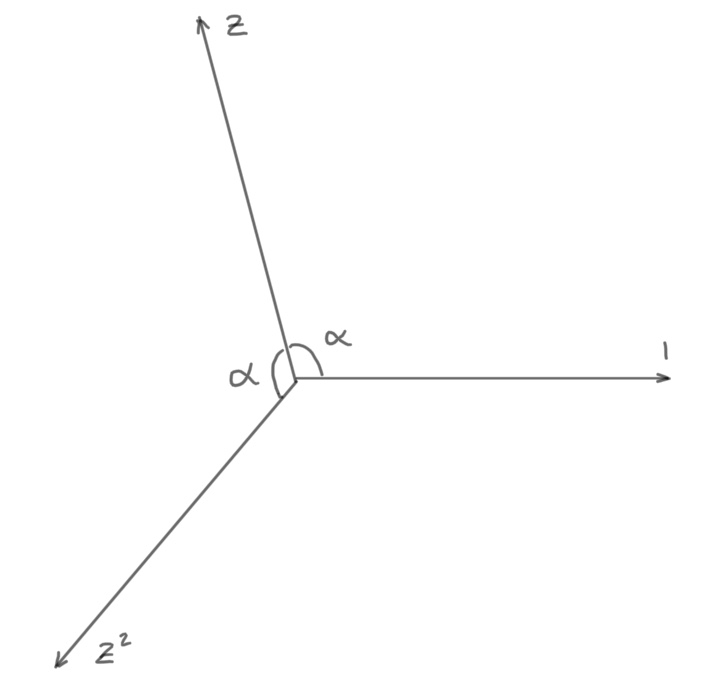 For the modulus issue, let us use the classical equivalence (see here):

as $\theta \ne k \pi$ (such values would give degenerated quadrilaterals), we have necessarily $r-\tfrac1r=0$, giving $r=1$.

Moreover, this condition is in fact sufficient: all $\alpha$s verifying (3) give an adequate solution.

Not the answer you're looking for? Browse other questions tagged geometry complex-numbers or ask your own question.