After trying to get my head around this for an embarrassingly long time, I think I need some help... We defined local (lyapunov) stability and asymptotic stability the following way:

Ok so up to here both defintions make total sense to me. Now here comes my trouble: Later in the lecture we define "global stability" just with the following sentence:

"An equilibrium is called globally stable, if it is stable for (almost) all initial conditions, not just some which are close to the equilibrium $y^*$."

This course isn't really about stability analysis so we didn't go into depth at all, or provided any proofs but I would really like to understand the difference between global stability and global asymptotic stability. I've read everything on google and found nothing, so I probably don't see something extremely trivial. Any help is appreciated!

"Global" and "asymptotical" are different attributes. Note that a stable equilibrium may not be an attractor. For instance, the solutions of: $$ x'=-y \\ y'=x $$ are the circles $x^2+y^2=r_0^2$ so the origin is stable because trajectories remain inside a bounded neighbourhood as small as desired (depending on the initial $r_0$), but they do not tend to the origin.

Since this system is linear, the stability is global, meaning there are no unbounded trajectories even if we start far from the origin. In contrast, for the one-dimensional system: $$ y'=y(1-y) $$ linearization shows that the equilibrium $y^*=1$ is stable and, in fact, asymptotically stable. However, this property is not global, e.g. the solution with initial condition $y_0=0$ is the constant trajectory $y(t)\equiv 0$ so $y(t)\notin B_{\frac{1}{2}}(1)$.

I have the same confusion about Globally stable and Globally asymptotically stable. I think this is because Globally stable does not have a clearly strictly mathematical definition, while Global asymptotic stability does have. (I search through the whole internet and cannot find the exact definition of Global stability. I will be very grateful if someone can provide it)

I am going to give my understanding of Globally stable and Globally asymptotically stable. 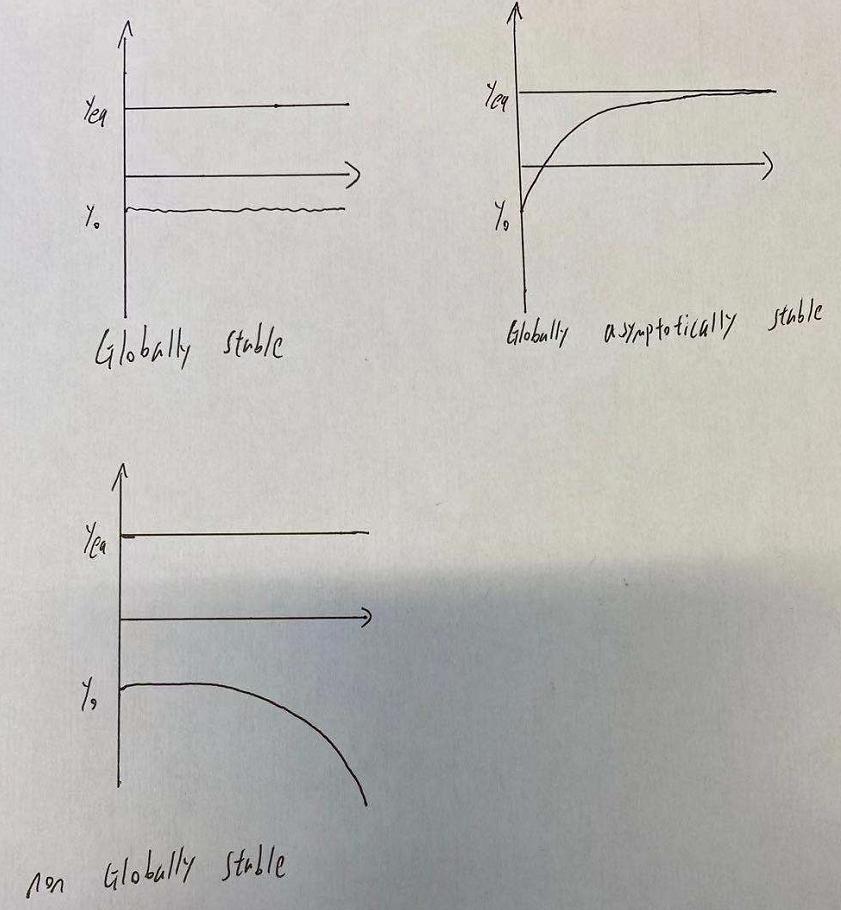 Again, This is just my understanding, and I can't guarantee it is 100% correct, but it looks perfect to me for all my cases. Any comment or suggestion considering this post is welcome.