This simple 2D heat equation is not separable?

I'm working on an engineering problem that, you know, would be cool if some analytical solution was possible. I apparently am missing something or this problem cannot be solved with simple separation of variables (?).

Consider the classical 2D heat equation on a semi-infinite slab subject to convection at its surface:

Where $x$ is the surface-tangent coordinate and $z$ is the "depth" coordinate, $z=0$ being the surface. The boundary condition at the surface is: ($\lambda$ is the conduction coefficient)

Note $h(x)$ is the convection coefficient; which is not constant over $x$. This is actually what seems to make this problem (unexpectedly) hairy. So far I attempted to solve through Fourier Transform, Green's function, and other approaches. The approach that I think demonstrates how this cannot be a separable problem is:

If the problem was separable, I would assume we should be able to use $\tau=\theta e^{-ikx}$ as the solution, and the constant coefficient $\theta$ would have to be found. But if we replace the solution in the PDE we get the ODE:

Where $C_2=0$ to keep the solution bounded for $z \rightarrow \infty$. Replacing this in the boundary condition, however, gives us:

There is an extra $e^{-ikx}$ coming from $h$ being a harmonic excitation. The solution then yields this non-sense:

If I attempt solving through a Fourier Transform with no assumptions on the form of $T(x,z=0)$, I get stuck in a convolution operation between $h(x) * \tau(x,z=0)$ in the boundary condition, instead. Am I just bad at this? What am I missing?

The reason I'm looking into this is because when making measurements of surface temperature with an IR camera to infer convection coefficient, the conduction beneath the surface can be thought of as being a "convolution filter" that "blurs" my measurement. I wanted to derive what are the properties of this convolution filter so I can potentially reverse this effect and "re-sharpen" the images taken. Unfortunately, I can't seem to even get past solving a simple PDE, haha! Anyways, thanks for having a look!

Unfortunately, this seems to be a rather non-straightforward problem indeed. This is not an "answer" to the problem, but more something that I ended up being satisfied by; after running some simulations - so hopefully others will find this also of interest:

Let's change the boundary condition to

Where $q^{\prime\prime}(x)=q_0 e^{-ikx}$ is the harmonic heat flux spatial function we seek to de-convolve. Replacing the solution for $\theta$ in that boundary condition gives:

So this is what I was looking for. The infinite medium offers a $1/k$ decay for heat flux fluctuations at the surface, which I can use to de-convolve my measurements to infer the local heat fluxes.

Although the $1/k$ decay makes sense, it took me a while to understand why we have a singularity at $k=0$ (i.e., at constant $q^{\prime\prime}$). Then I realized that the PDE does not have a solution for the DC component that matches both boundary conditions. This is just a feature of the infinite depth assumption and is rather unrealistic.

As a reference, this is how the response of this PDE (red) to a delta function of heat flux (black) looks like : 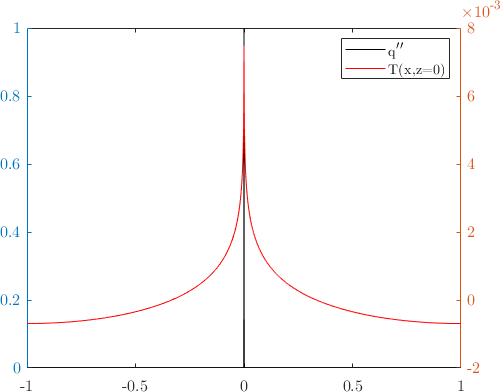 Hope this helps someone else in the future!

Not the answer you're looking for? Browse other questions tagged partial-differential-equations heat-equation linear-pde or ask your own question.